India: State Elections and Its Implications on National Politics 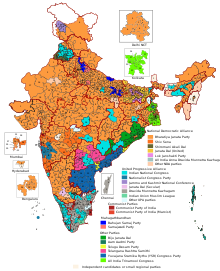 The long-drawn-out elections to the provincial assemblies to the four states and Pondicherry are about to conclude. Though results to all of them are to be announced only on the 2nd May, the Election Commission of India (ECI) is up against many odds this time.

Entrusted with the responsibility of organizing, monitoring, and conducting elections to all the state and central legislatures, ECI has to face a herculean task this time in the backdrop of the sudden upsurge Coronavirus in most parts of the country. Adding that to the very high level of political temperatures witnessed in the ongoing political battle has made ECI even more cautious.

While in Assam, the National Register of Citizens (NRC) and Citizenship Amendment Act (CAA) are the two major poll issues this time, and the ruling Bhartiya Janata Party (BJP) is betting high on them. Though there have been huge controversies and debates on both, domestically and internationally, it is not widely known that the NRC actually was a project initiated by the Indian National Congress (INC)-led by Dr. Manmohan Singh’s UPA government during the last years of its reign. CAA, however, was brought in by the current BJP government and has remained adamant on implementing it, though selectively.

With these laws suggesting a hardline approach towards the millions of illegal immigrants settled in Assam and politically patronised by various governments since the 1970s, BJP is all set to encash common anger against them. Though some suggestions have been made that INC has retrieved lost ground and, along with Badruddin Ajmal-led AIUDF, can make life difficult for the BJP, most analysts predict a comfortable majority BJP in the state again.

Tamil Nadu is a different game for both the national parties, BJP and the INC. While BJP has started making inroads in the state and alliance with the ruling AIADMK, it is optimistic about winning the state and expanding its footprints to this country. However, the major opposition in the state DMK has been making vigorous campaigns. Rahul Gandhi-led INC, which has virtually no existence currently in the state, is trying to ride piggyback on it to make it to the victory podium. Experts believe that both the state biggies, AIADMK and DMK, will fight it out, and the margin could be pretty thin for the one emerging triumphant.

In neighbouring Pondicherry, the previous INC government faced serious allegations of non-governance and corruption. BJP has increased its political muscle there at the cost of Congress and is likely to form a government there for the first time.

In Kerala, the BJP is likely to act as a political spoiler. It is probably the only state in the country where it is not fighting to win but extend its gains. The ruling Left Democratic Front (LDF) is running as favourite to retain power, while the INC-led United Democratic Front (UDF) is likely to end as runners-up.

It is West Bengal that analysts are most keenly watching on. All indications suggest that it could be a tough neck-to-neck political battle between the ruling Mamata Banerjee-led All India Trinamool Congress (AITC) and the BJP. The way PM Modi, his closest confidante, Amit Shah, and all top BJP leaders have made a beeline to the state indicates its determined endeavour to bring BJP to power in the state. On the other side, up against serious allegations of nepotism, corruption, and encouragement to anti-social elements and lawlessness, Ms. Banerjee is fighting with her back to the wall.

In terms of national repercussions of results of the vaguely-called mini-elections before the 2024 national elections, it holds significance to the opposition and the BJP. For the opposition, however, it is virtually an issue of political survival. The ruling BJP, under the leadership of Modi, has become virtually unstoppable. First, it has brought the oldest political party of the country, INC, to the status of a regional party. In the Parliament, it does not even have the status of the main opposition party. Out of 28, it has its own government in a mere three states, while Maharashtra and Jharkhand have the secondary status as coalition partners.

A likely victory for the BJP in Assam, Pondicherry, and alliance victory in Tamil Nadu, will further eclipse Congress’s position in the national politics. BJP is more likely to better its performance in Kerala too. The return of LDF to power will most certainly embolden the disgruntled elements in the INC, who will more explicitly question the leadership of Rahul Gandhi. The proposed internal elections in the INC that have never involved a real political fight against the Nehru dynasty might once could be postponed.

However, the stakes in the Bengal elections undoubtedly, are the highest. A defeat of Mamata Banerjee’s Trinamool by the BJP, even by a smaller margin, could further open the floodgates for defections to the BJP. The party could well find it difficult to retain its political aura in the state and the national stage. The BJP could then well emerge as the giant, all-conquering, all-pervasive political force while the regional satraps like Mayavati, Akhilesh Yadav, Tejasvi Yadav, Udhav Thackrey, Mamata Banerjee could lose the further political sheen and the vital 2022 state elections in Uttar Pradesh, might see a bold, powerful BJP challenging a demoralised opposition.

However, a slender majority for Trinamool Congress in Bengal could re-ignite opposition hopes of a renewed fight back against the BJP, and Mamata Banerjee could emerge as a possible contender for the leadership of national opposition. Rahul Gandhi’s Congress, however, is likely to be the biggest loser of these elections, and a victory for the Trinamool Congress could well be a political consolation for it. However, the UDF return in Kerala could just give breathing space to the leftists in India who are all but out politically in the country.