Special judge Surendra Kumar Yadav had asked for all the accused to be present in court. However, only 26 of the accused were present, while Advani, Joshi, Bharti and Singh were not. While the Advani and Joshi were excused due to their age and concerns that they may contract COVID-19, Bharti is in AIIMS after she tested positive for the coronavirus. Nritya Gopal Das too was not present in the CBI special court. They did, however, attend the proceedings via a video link.

According to LiveLaw, the judge said that the demolition was not pre-planned and the accused persons were “trying to stop the mob and not incite them”. He added that there was not enough evidence against the accused and that the court cannot probe the authenticity of the audio and video evidence provided by the CBI.

“Those who climbed on the dome, they are the anti-social elements,” the judge observed, according to NDTV.

The Supreme Court had fixed September 30 as the deadline for the trial court to pronounce its judgement in the nearly three-decade-old case.

Also Read: Babri Masjid: The Timeline of a Demolition

In the wake of Babri Masjid demolition, two FIRs were lodged – FIR no. 197 and FIR no. 198. The former was filed in an Ayodhya police station immediately after the demolition, naming “lakhs of unknown kar sevaks”. The other FIR named several BJP and Sangh parivar veterans such as Lal Krishna Advani, Murli Manohar Joshi, Uma Bharti, Mahant Avaidyanath, Vishwa Hindu Parishad (VHP)’s Vishnu Hari Dalmia and Ashok Singhal for making incendiary speeches leading up to the demolition. However, unlike the first FIR, the conspiracy charge was missing in the second. In addition, 46 more FIRs pertaining to cognizable offences, and one FIR pertaining to non-cognizable offences, were also lodged.

On August 27, 1993, the case was handed over to the CBI by the UP government. The CBI filed a joint chargesheet on October 5, 1993, citing 40 persons as the accused. This included prominent leaders of the BJP, VHP, Shiv Sena and Bajrang Dal. But the conspiracy charge was dropped against some of the Hindutva leaders. In 2001, a special CBI court also decided to drop the conspiracy charges against Advani and others in the case, which was later upheld by the Allahabad high court in 2010. Experts believe that the court ruling was essentially on technical grounds.

Twenty five years after the demolition, on April 19, 2017, a bench of the Supreme Court finally reversed the judgments delivered by the subordinate courts and restored criminal conspiracy charges against Advani, Joshi and some others. “In the present case, crimes which shake the secular fabric of the constitution of India have allegedly been committed almost 25 years ago,” read the order passed by a bench of Justices P.C. Ghose and R.F. Nariman, while ordering a time-bound trial (within two years) in the demolition case.

However, the trial was not completed within the stipulated time. On July 19, 2019, the apex court extended the tenure of special judge Surendra Kumar Yadav hearing the demolition case. The court said that the extension of tenure of the special judge, who was set to retire on September 30, 2019 would only be for the purpose of concluding the trial and delivering a verdict in the case. The apex court also asked the judge to deliver a verdict within nine months.

But again, the deadline was not met. The current deadline (September 30, 2020) was fixed by the apex court on August 19. On May 8, the top court had given an extension of three months’ time for the completion of the trial, meaning that the judgment should have been delivered by August 31. 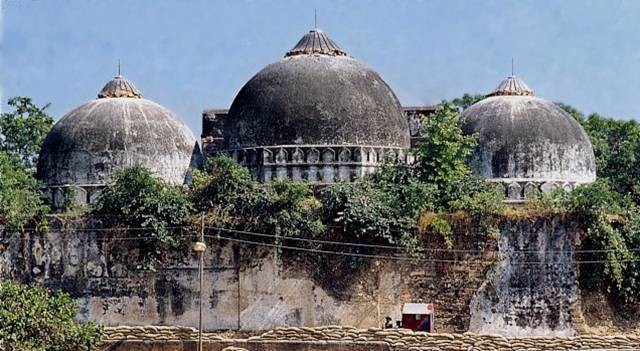 Rear view of the Babri Masjid in Ayodhya before it was demolished. Photo: Wikimedia Commons

On December 16, 1992, a commission of Inquiry was appointed by the Central government to probe the sequence of events that led to the demolition of the Babri Masjid. Headed by Justice M.S. Liberhan, then a sitting judge of the Punjab and Haryana high court, it was supposed to submit its report to the government “as soon as possible but not later than three months”. But it took 48 extensions, becoming the the longest Commission of Inquiry in the history of Independent India. The report was finally submitted on June 30, 2009.

The Commission in its report, notes:

“Vinay Katiyar, Champat Rai Jain, Acharya Giriraj Kishore, Mahant Avaidyanath and D.B. Roy etc had begun plotting for demolishing the disputed structure though secretly right from the beginning. The methodology adopted for the demolition was sudden attack on the disputed structure, sudden simultaneous attack on journalists, proceeding with technical logistics like putting of ropes in the holes and then pulling the wall under the domes.”

Moreover, as per the Commission’s report, “The state by its conduct, ensured non-use of force, and even eliminated the chances for the same by resisting the deployment of the central forces, and restraining the use of force against kar sevaks and the leaders of the movement. Failure to prepare any contingency plan to meet various eventualities not only sent a signal that the police, executive and state was supporting the mobilisation, but also that they would ignore any plot hatched. Participation of the Government in levelling of the structures around the disputed structure, construction of the Chabutra in violation of the court’s orders, issuance of specific orders not only not to fire, but also not to use force against kar sevaks emerged from the prognosis of evidence.”

According to the CBI chargesheet, Advani was also present at a secret meeting on December 5, 1992, at Vinay Katiyar’s home where the final decision to demolish the mosque was taken. He has been named by the CBI as a conspirator in the criminal case of the demolition of Babri masjid. Another important accused in the case is Kalyan Singh, the chief minister of UP at the time of the demolition. Notably, it was his government which in an affidavit filed on November 27, 1992, before the Supreme Court, had assured the court that his government was “fully competent to prevent the violation of the court’s order and [that] the assistance of force offered by the Central government is not necessary in the present circumstances.”

Singh in a recent interview to Hindustan Times said, “I will tell you something. That day (December 6) amid the build-up, I got a call from the district magistrate of Ayodhya saying that nearly 3.5 lakh kar sevaks had assembled. I was told that central forces were on the way to the temple town but their movement was halted by kar sevaks outside Saket college. I was asked whether to order firing (on kar sevaks) or not. I denied permission in writing and said in my order, which is still there on the files, that firing would lead to the loss of many lives, chaos and law and order issues across the country.”

Upon being asked another question on his decision, he told the reporter, “I am proud of my decision as today I can proudly say that I might have lost my government but saved kar sewaks. Now, in hindsight, I feel that subsequent demolition eventually paved the way for the temple.”