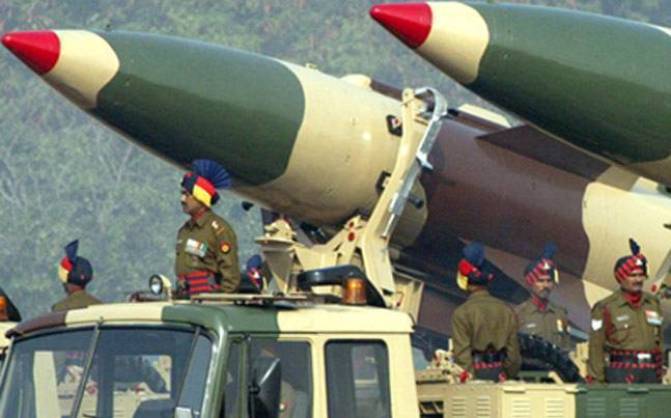 Introduction of Nuclear weapon has transformed the global politics as well as the military power in an expensive way. The primary purpose of acquiring a nuclear weapon is to prevent wars among nuclear-capable adversaries through maintaining deterrence stability. The concept which has dominated the global politics is that war is not a rational mean to achieve political objectives while the strategy of nuclear deterrence is considered as a dominant aspect of nuclear strategy.

Nuclear deterrence is south Asia is significant as it has played a vital role to prevent nuclear and conventional war. Nuclear deterrence in South Asia revolves around two historical adversaries: India and Pakistan. India’s nuclear strategy is based on three objectives: first to counter Pakistan and China; second to maximize power; Third, it aims to acquire the status of great power so that it could influence regional and global political and security order. While, the focus of Pakistan’s deterrence policy is to ensure national security and counter the threat from a nuclear neighbor, without any intention of influencing the regional and global politics.

Though nuclear deterrence has prevented the war strategic stability has remained fragile due to India’s Military Modernization plan and the expanded defense budget. India is pursuing the long-term program of a huge scale modernization of land, sea, air forces including the rapid modernization of Nuclear, outer space and Cyberspace. The Recent technological acquisition shows that India is primarily supported by United States, Russia, and other European states. Indian ambitions comprised of expansion of long-range missiles, ICBMs, MIRVs, SLBMs, acquisition of BMD system and Cold Start doctrine with the introduction of Nukes has left Pakistan with the only rational choice to shift to full spectrum deterrence.

India’s offensive strategies, renewed defense settlements, increased defense budget and the conventional military build-up forces the Pakistan to take countermeasures to ensure deterrence stability and maintain the strategic equilibrium at the same time. India’s BMD system and Cold Start Doctrine (CSD) are seen destabilizing for regional-centric deterrence in the future by analysts. Therefore Pakistan has developed the viable countermeasures for BMD and Indian proactive strategy of CSD. Such as the recent developments in Indian Ballistic Missile Defence (BMD) system are the matter of great concern for the Pakistan because endo-atmospheric missile, Advance Area Defence (AAD) has added new dimensions to the regional security equation and pose the serious threat to deterrence stability. In response, Pakistan’s surface to surface ballistic missile, Ababeel is a significant contribution in the defense arrangements of Pakistan. Ababeel is capable of delivering multiple warheads using Multiple Independently target Re-entry Vehicle (MIRV) technology. It is a valuable addition to the Pakistan’s defense, and it (MIRV) will facilitate Pakistan to sustain the credibility of its deterrence strategy and neutralize the Indian BMD system due to its ability to deliver multiple warheads. Secondly, offensive CSD with the nuclear element has made the dynamics of regional deterrence even more intense. So the most significant development in response to CSD is the introduction of short-range, low yield, battlefield weapon named as “NASR.” By developing NASR, Pakistan gave a viable solution or calculated mechanism to counter India’s Cold Start Doctrine without undermining the deterrence stability of the region (Khalid, 2017).

Another, Dilemma of the South Asia is that India’s military modernization facilitated by global powers is often viewed as destabilizing for regional-centric deterrence. Trends and recent developments show that India’s conventional and nuclear ambitions are largely being facilitated by a diverse group of supplier states including Russia, United States, France and other European countries. On the other side, China and Pakistan are making strong partnership in economic, military and nuclear fields. China can play the crucial role to maintain the balance of power and deterrence in the region by assisting Pakistan in military and nuclear fields. Therefore, in response to Indo-US-European state’s strategic partnership, Strategic co-operation among China-Pakistan has evolved the unique kind of equilibrium in the South Asia. However, India’s military modernization plane, missile program, Indo-U.S civil nuclear deal and discriminatory approach of U.S towards Pakistan have directly challenged the regional strategy and deterrence balance. In this regard, the absence of crisis stability and deterrence stability mechanism is increasing the fragility of South Asian strategic stability.

To sum up, the concept of deterrence is considered as a remarkable tool to maintain peace. Additionally, nuclear deterrence is continuing in South Asia, despite the fact that conventional and nuclear programs of India and Pakistan demonstrate different trends. Role of external powers cannot be undermined in triggering the nuclear arms race in the region. Therefore, to maintain the deterrence stability, it is imperative to develop a framework comprised of force balance; arms control regime and conflict resolution through dialogue and confidence-building measures in the nuclear and conventional forces.