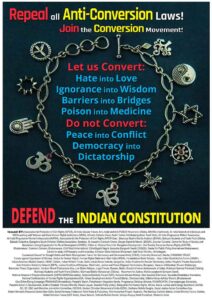 I have a confession to make. That I have been converted many times. From one faith to another to yet another, endlessly. And I simply love it.

Sometimes I got converted through the power of a compelling idea, just by reading a wonderful book. Or watching a well-made movie or listening to a song (especially sung by Mohammad Rafi saheb).

Often I have become a true believer thanks to the charms of a wonderful personality. I obtained so much spiritual relief through them on Earth that I have indefinitely postponed my journey to Heaven.

And I must admit, quite shamelessly, I have been repeatedly converted by the lure of money too – especially when the currency on offer was the US dollar and in the right amount.

In turn I too have converted many I have been with – whether family, neighbours, classmates, complete strangers. I have been evangelical about many causes from planting trees to overthrowing capitalism. These days I am trying (unsuccessfully) to get my children to join the ‘Church of Stop Shopping’ – which sees malls and online retailers like Amazon as the agents of the Devil.

Which is why I am completely baffled by all the noise being made by some self-appointed champions of ‘Hinduism’, about conversion being a problem in India. Apart from enacting draconian laws in several states around the country their cowardly goons have vandalized Churches, beaten up pastors and threatened Christians with dire consequences – for just being Christians!

India’s Muslims have been brutalized even more over the last two decades, accused of converting non-Muslims through ‘jihad’ of different kinds – from romance to clearing civil service exams with flying colours. This again is truly puzzling – why target Christians or Muslims as indulging in conversions when the truth is that converting people from one faith to another has been a staple part of India’s history from ancient times.

In fact the biggest and most successful conversion movement in India historically has been that carried out by the proponents of Brahmanism (also called Sanatan Dharma), a very  tightly guarded and specific set of rituals, beliefs, myths. After all, if Vedic culture, the inspiration for Brahmanism, originated 3500 years ago in what is now the region of Punjab, how did it reach all parts of the country if not through conversion? And how did a multitude of local, indigenous gods and deities in this country get incorporated into the imaginary, umbrella framework called ‘Hinduism’, if not through active proselytizing?

And surely  all of this conversion over the centuries was not done through mere persuasion alone? Both  force and  bribery played crucial roles, given the alliance between the Brahmin, Kshatriya and Bania – in ‘convincing’ the population to change their prayers, rituals and even gods.

It is a process that continues to this day as the high priests of Brahmanism – mostly from cow belt India –   dictate to all Hindus what they should eat or wear, who their daughters should marry, which deities to worship and how they should behave with non-Hindus. In the Adivasi areas of the country the situation is worse as they are forced to call themselves ‘Hindus’, thus denying their own religions and traditions that date back to many millennia.

For that matter, when the Buddha, 2500 years ago, preached his message of the Four Noble Truths and Eightfold Path to Nirvana wasn’t he also converting members of the public to his faith?  To think of it, how come there are so many adherents of Jainism and Sikhism in India without some kind of conversion process taking place. Would Lord Mahavir or Guru Nanak be ‘guilty’ of carrying out religious conversion and what would that mean anyway?

In more recent history, in 1956, when Dr B.R.Ambedkar converted to Buddhism and inspired thousands of Dalits to emulate him, would he not have been charged under the current anti-conversion laws? Would Amit Shah or Yogi Adityanath have  booked Babasaheb on charges of ‘religious conversion’?

So, let me come to the main point I am trying to make.  The Muslims or Christians of India have done nothing that has not been done before by everyone else and conversion is an absolutely very Indian tradition – and everyone has the right to try and convert everyone else.

Conversion is essentially the process of people of different belief systems interacting and influencing each other in various ways to change their perceptions, habits and moral or cultural norms. Every television channel and advertiser is constantly trying to convert his/her audience to change their faith – to shift their object of worship from Coca Cola to Pepsi. This is so normal an activity that to even think of stopping it, leave alone making it a criminal offense, is the sign of a high degree of mental derangement.

What is really happening in India now is that a section of upper-caste Hindus are essentially telling everyone else in the country that only they have the right to convert everybody else and there should be no competitors at all ! And for them it is not just about religious conversion because these folks don’t like the conversion activity carried out by communists, atheists, democrats, secularists and supporters of the Indian Constitution either.

What they want – and are close to getting- are unchallenged powers to decide both the lives and afterlives of all Indian citizens. In practice what this means in the Indian context is  the installation of a theocracy where the only ruling deities will be a bunch of Maharashtrian Brahmins, Gujarati Banias together with the Kshatriyas of Uttar Pradesh. This is a power grab of immense proportions that will leave the rest of India- and not just religious minorities- as second-class citizens.

The response that is called for from the truly devout of all faiths and beliefs (including atheists, who are among the most spiritual people I have ever met) is to fight for their right to preach, convert and also get converted. Let us convert and get converted should be our slogan – as our fundamental human right.

Failure to resist will mean not just our own surrender but that of our Gods too, to the tyrants in power today. And for the truly spiritual that is simply not an option at all.

So let us all go forth and convert – Hate into Love, Abuse into Prayer, Despair into Hope

Anger into Empathy, Division into Unity and Suffering into Solidarity.

Satya Sagar is a journalist and public health worker who can be reached at sagarnama@gmail.com