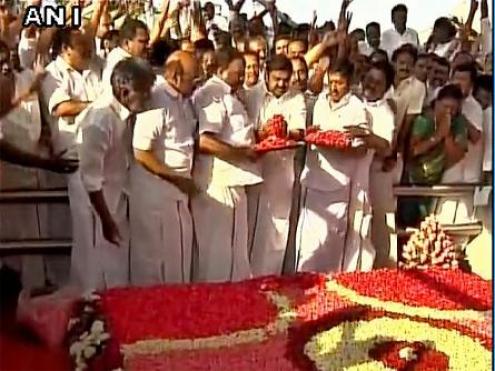 As mystery surrounding Jayalalithaa’s death haunts the ruling AIADMK leaders who now make contradictory statements on the state of health of their beloved leader who had made big in Tamil Nadu politics and government, the demand for a thorough investigation about that increased in recent days as one minister revealed that none had met the then TN CM in the hospital to know her real condition and they all were lying to the public about her stable conditions.

As mystery surrounding Jayalalithaa’s death haunts the ruling AIADMK leaders who now make contradictory statements on the state of health of their beloved leader who had made big in Tamil Nadu politics and government, the demand for a thorough investigation about that increased in recent days as one minister revealed that none had met the then TN CM in the hospital to know her real condition and they all were lying to the public about her stable conditions.

Doubts of serious nature have been raised over the events leading to Jayalalithaa’s hospitalization on 22 September 2016, and her death by various quarters with Opposition parties including the DMK demanding a CBI probe.

Under pressure from various quarters, Tamil Nadu government on September 25 has set up an inquiry commission headed by a retired high court judge to probe AIADMK supremo J Jayalalithaa’s death, amid renewed demands for a thorough investigation after a state minister claimed their party leaders had lied about her health condition.

Justice (Retd.) Arumugasamy will head the inquiry into the circumstances leading to the death of Jayalalithaa on 5th December 2016 after 75 days of treatment at Apollo Hospitals in Chennai. An official release read: “To conduct an inquiry and submit a report on the death of former Chief Minister J Jayalalithaa, an inquiry commission headed by retired high court judge Justice Arumugasamy has been constituted.” A government order had been issued for this purpose, it added.

The probe into the AIADMK supremo’s demise was a key pre-condition of rebel leader and now deputy chief minister O Panneerselvam for the merger of two factions led by him and Chief Minister K Palaniswami.

Four days ahead of the merger, Palaniswami had on 17 August announced that a commission of inquiry would go into the death of Jayalalithaa. After Panneerselvam had made a demand for a probe claiming there were doubts in the minds of people, Apollo Hospitals had arranged a media conference in February last seeking to put to rest any such apprehensions.

A team of doctors, including UK-based specialist Richard Beale, who had treated Jayalalithaa, had explained in detail the medical attention given to her during hospitalization.
Monday’s announcement by the government came amid renewed demands by Opposition parties for a probe after forest minister Dindigul C Srinivasan last week told a public meeting in Madurai that AIADMK leaders had lied about Jayalalithaa’s wellbeing during her hospitalization. He had claimed that they had only repeated what Jayalalithaa’s close aide VK Sasikala wanted them to say. The minister had also demanded that the Sasikala camp make public the video evidence which it claimed to possess on the treatment of the late leader.

Jayalalithaa was admitted to Apollo Hospitals for fever and dehydration on 22 September 2016. After a prolonged hospitalization for 72 days, she had died on 5 December 2016 following a supposed cardiac arrest.

The government’s announcement came even as sidelined former AIADMK leader TTV Dhinakaran asserted he would submit to any probe agency a video of Jayalalithaa shot by his aunt, Sasikala. He also sought an inquiry commission headed by a senior serving judge.

Ill-fated Dhinakaran said his family was in possession of a video of hospitalized Jayalalithaa shot by Sasikala and was ready to submit it to any probe agency, including the CBI. He claimed it had not been released so far since Jayalalithaa at that time was clad in a “nightie.” “Amma (Jayalalithaa) had lost a lot of weight… it was a video shot by my dear aunt (Sasikala) herself. You all know none would have seen Amma in a nightie, not any functionary. Even when Prime Minister Rajiv Gandhi visited Amma following her accident in 1989, she was fully attired… she always maintained that dignity,” Dhinakaran said. He told reporters that the said video of Jayalalithaa, attired in a “loose nightie,” was shot by Sasikala after the former was shifted from the ICU to a room in the hospital.

According to Dhinakaran, when the Opposition had earlier raised doubts over Jayalalithaa’s treatment and death, Sasikala had suggested that “we should seek a judicial probe” into the matter. “If that video is released by us now, there would be a debate on its authenticity,” he said, adding it could be given to the probe panel. “We are ready to submit it to an appropriate forum, whether the CBI or even Interpol. We have nothing to fear,” he said.

Srinivasan had also claimed that out of fear of Sasikala, they had publicly stated that Jayalalithaa ate idlies, consumed tea and was given sweets. No one was allowed to meet the late chief minister. Whoever came, would be briefed by Sasikala’s relatives that she was “all right,” he had said seeking the pardon of the public.

Ever since Jayalalithaa’s death, there have been hints of foul play over her death, with critics pointing fingers at the now-jailed Sasikala. Tamil Nadu Chief Minister K. Palaniswami had announced the government’s decision to set up an inquiry commission to be headed by a retired High Court judge to go into the death of Jayalalithaa.

Speaking at a public meeting in Madurai, around 500 km from Chennai, on Friday night Sreenivasan said: “We would have told lies that she (Jayalalithaa) had idlis and people met her. The truth is that nobody saw her.” Sreenivasan said he is seeking an apology from the people now for “those lies.”

According to him, everyone in the government and the ruling AIADMK party “lied about the people” who had met Jayalalithaa in Apollo Hospital, where she was admitted on 22 September last year. Sreenivasan said even the national leaders used to sit in Apollo Hospitals Chief Pratap Reddy’s room and the AIADMK ministers would also be seated in that room. “We all lied then so that the party’s secret does not get leaked,” Sreenivasan said. He said nobody met Jayalalithaa in her hospital room.

Former CM and AIADMK supremo Jayalalithaa was admitted to Apollo on the night of 22 September and died in the hospital on 5 December. During the period of stay, the information from the government and the hospital about her health condition was scarce.

Most of the communication about her health condition stated that she was on the road to recovery and was doing well. He said it was only V.K. Sasikala – a close aide of Jayalalithaa for several years – who used to meet Jayalalithaa.

Reacting to the charge, TTV. Dinakaran, the nephew of Sasikala, said on 1 October 2016 even Sasikala was not allowed inside Jayalalithaa’s room. He said on the instruction of doctors Sasikala would go inside Jayalalithaa’s room for two minutes. Dinakaran and his supporters ask the CM Palanisamy to resign the post as it was given by Sasikala but they forget the fact that she did not offer the CM post on him just like that but when the court and Governor refused to swear her in, she had to choose one among the supporters and Palanisamy into the picture, otherwise he might be a minister, if at all.

Sasikala/Dinakaran’s dream of taking over the ruling AIADMK, Jaya government, and entire Tamil Nadu its huge wealth for use by the Mannargudi gang could not materialize.

Sasikala and Dinakaran have been thrown out of the party. In fact, Jayalalithaa had removed him from primary membership long ago for his corrupt politics and Sasikala was never given any post either in the party or the government in any manner. Soon after Jayalalithaa death, Sasikala assumed the party supremo and was eager to quickly become the CM too so that she could enjoy the privileges in her jail of being a CM. She was sure that the Supreme Court would certainly punish her for accumulating questionable financial-wealth and send her to jail. Her money, made illegally by being in Jayalalithaa‘s rose garden, could not save her from going to jail.

The investigation commission has not been given any time limit or references, and so the Justice would be free to take enough time to investigate the matter.

Many political leaders like DMK leader Stalin and PMK leader Anbumani have asked for CBI probe to bring out all facts to the public. They also expressed concern that the government could not appoint a sitting judge to probe the case to be impartial.

In fact, through such concerns are understandable, it Is not necessary, however, to trust only a sitting judge or gong for CBI, for anybody can be influenced by the central government that controls all courts and judges.
Let the probe go on, and the judge submits his findings to the government. Meanwhile, the TN government also should ask the intelligence wing to gather related facts for the investigation and pass on to the judge. The federal government, in the meantime, could ask the CBI to secretly investigate the case and submit its report also to the Justice for a consolidated final verdict.

This multi-approach could prove to be fast truthful and realistic. However, the central government should not use the CBI report as a tool to force the AIADMK to make the ruling BJP a partner in the forthcoming local and other polls in the state.

Jayalalithaa opposed any track with BJP that would help the Hindutva forces spread their poisonous tentacles across the state.