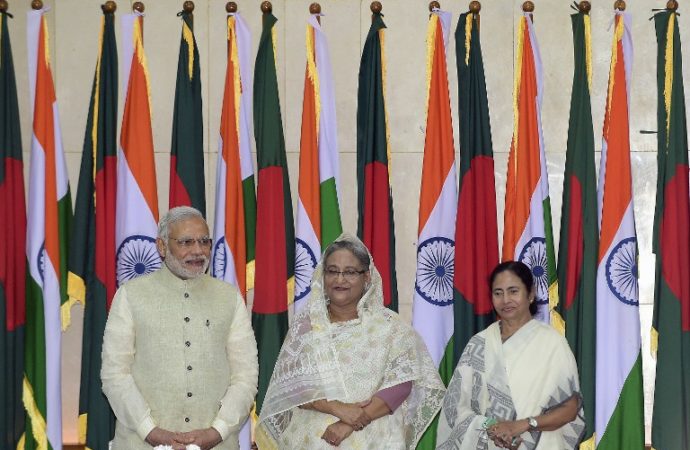 A famous folk song in Chittagong goes like this; “my love, you fed me poison telling it’s honey.” In colloquial Chittagonian, it is; “Modhu koi Koi, arey bish khawaila”. Bangladesh is reverberating with news of India-Bangladesh defense pact expected to be signed during Sheikh Hasina’s visit to India in April 2017.

India is expecting to sign a comprehensive, 25-year agreement on bilateral defense cooperation during Prime Minister Sheikh Hasina’s upcoming state visit to India from 7 to10th April. They carefully leaked a version of the defense pact to the public for discussions and debates. As per the latest information received from various sources, the India-Bangladesh pact will be in the form of an MOU that will serve the purpose for the time being.

Even though the proposed defense pact or memorandum has been sweetened for Bangladesh by adding few thoughtful words like “bilateral” and “mutual,” it sounds similar to the following story.

There was a mutual and bilateral agreement between a Village Chief and a newlywed ordinary village man with a beautiful wife. The pact allowed both free access to each other’s bedrooms. The Chief whose lands encircled the small property of the poor man drafted the “top down” proposal. The poor guy was coerced to sign the agreement allowing same opportunities for both parties.

The Village Chief took the full advantage of the deal by frequenting the neighbor’s house to close in on his attractive wife. Too busy on the job, the poor guy did not have enough time for his lovely wife. To enjoy his part of the bargain, he did not dare to raise his eyes to the Chief’s wife out of innate fear and embedded respect that was passed from one generation to the other. Precariously, some strange terrorists appear at night who threw stones on his tin roof terrorizing his young wife. It created a great opportunity for the Village Chief to justify his frequent visits to young couple’s house. Now he gets welcoming calls from the young lady to combat terrorism at the total frustration of the poor chap who is duty-bound to respect the agreement.

However sweetened it is; the bilateral defense pact or agreement of any kind between India and Bangladesh will end up with the same fate like this story.

Struggling to achieve a fully participatory democracy since Bangladesh’s independence in 1971, a useful tool “caretaker government” was devised to handle a free and fair system of voting. This body served as the interim neutral government to oversee a fair general election. It was successful in conducting three national elections in 1991, 1996 and 2001 where immediate past government failed to return to power. For a third world country, this was a great example and a trendsetter for fair and free elections. Also, it helped in the political and economic progress of the country. It set the real motion to a progressive economy.

This was alarming to some quarters that saw a democratic and prosperous Bangladesh a threat to their interests and design. It is crystal clear that a sound plan was devised to transform a multi-party democracy to a one party autocratic rule that favored India. It serves their purpose in dominating Bangladesh. An artificial “divide and rule” policy was implanted in a society that was otherwise pretty homogenous and more or less harmonious unlike many areas in South Asia.

On 11th January 2007 a civil-military coup appeared in Bangladesh with the promise of better governance and fairer rules of law. People welcomed it as they got a respite from the violence in the previous years. The military offered a spoon of honey calling it 1/11, and extended and twisted the structure of the caretaker government that lasted for two years distorting the state’s constitutional obligatory tenure of three months. They developed few action plans and gave the appearance of handing power over to a democratic system as per their second road map.

India openly supported and interfered in the above process which continues till today.

So democracy in Bangladesh added a new dimension; “government by India, for India and of India” and the façade of the government will remain in power so long India’s support exists.

Ms. Sujata Singh came to Dhaka and rebuked Ershad for his refusal to participate in the 2014 election which was boycotted by leading opposition parties fearing manipulation by the handpicked election commission. H.M. Ershad, ex-dictator-President and a trusted partner of Sheikh Hasina is an unpredictable politician having a Casanova like character. He was the only alternative who could form a fake opposition party to legitimize Hasina’s election to give an impression of democracy in Bangladesh. But he was not a likely choice to create an opposition in the parliament as the largest opposition led by Begum Khaleda Zia refused to participate in a botched election. The last moment refusal by unpredictable Ershad to take part in the 2014 election placed Sheikh Hasina and her mentor India in a very uncomfortable position. Sujata Singh openly entered the scene and rebuked Ershad for his deeds. She played a major role in conducting the election drama. Ershad’s wife Rowshon Ershad came to the rescue by offering her help. One may recall she is the lady who was admitted to a maternity hospital in 1982-1983 faking a pregnancy. Officially she gave birth to a son without any signs of pregnancy at all. To the utter surprise of nation’s intellectuals and conscious people, she did so just to safeguard her husband’s career as ruler of the country where childless ruler is considered an illegitimate king. One of the famous artists of the country termed Ershad “Bishwa- Behaya” meaning “the most shameless creature in the world.”

Finally, Rowshon Ershad turned out to be a reliable choice to act as the fake leader of the opposition to preserve much needed democratic facade of Hasina’s so-called “Westminster-style” parliament. Jacked up by Indian and Hasina government’s support, she took control of her husband’s party just before 2014 controversial election after forcefully admitting the poor husband in the Combined Military Hospital (CMH). She was kind enough for allowing him to play golf from the hospital bed and to be busy with his other favorite pastimes. The whole nation was stunned by such an election circus.

It is not known, how much the Indian people know or care about such immoral exercise of their government. Indian authorities consider 170 million inhabitants as sub-human level creatures. Their international stature was emboldened by backing of the United States. The USA, looking for war to sell their war materials generally bypasses human concerns and development of democracy. India is now a great market for nuclear goods and business in that front is booming. Creation of a collision in the India-China front is an opportunity for the United States to improve their business interests. So they sub-contracted the leadership of South Asia to India even though USA is fully aware of the dislike of the neighbors of India towards the state of India and her policies. Some neighbors are scared of India and Bangladesh is one of them.

Instead of providing real help in the form water sharing, India is shoving her defense agreements with Bangladesh. Bangladesh is a peaceful region and war should be a far cry for this small nation. Their armed forces should be strengthened to protect the borders, vast sea lanes and the ocean wealth. We are not going to ally with India to fight against China or Pakistan. So why do we need to have a defense treaty?

The following anecdote was getting popular in the social media to express people’s frustration and concern over aggressive Indian penetration into the political and cultural life of Bangladesh.

A couple planned to have an intimate encounter at noon on a Sunday. But their elder son was an obstacle to their plans. Like any other cricket loving boy, the child was cozied into making commentaries on whatever he observes in the street (like cricket commentaries) sitting in the balcony. He was happy to oblige and off he went to his task:

Jamal uncle is passing by his car…

Chanchal big-uncle roaming in the garden…

Sukharam uncle is going out with his family…..

Shabita Aunty is drying her hair outside of their house.

Roshmoy Uncle and Aunty are doing the same thing inside their room as you are doing…..

His dad shouted from inside, “You rascal; how do you know that they are doing the same thing?”

The boy replied “their son is also doing the same thing as I am doing”.

Indeed this is the danger in mistaking a mature boy for immature. India is taking the same risk by taking a wrong view of a politically developed nation as an immature entity. Indian policy may be proved awfully wrong if other global and regional players get into the act of maneuvering a population of 170 million against them. The ground has already been created for such a destructive and cunning policy. It’s a matter of time.