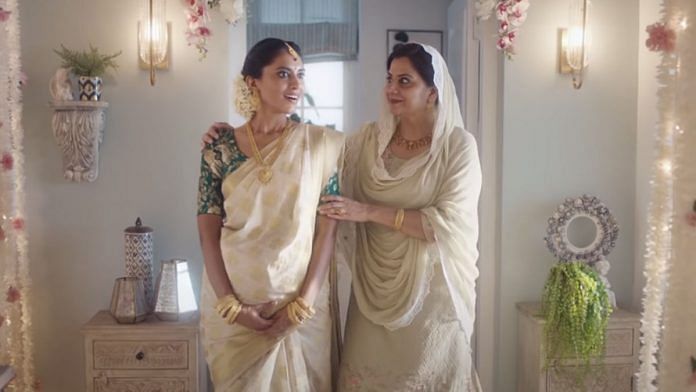 A still from the controversial ad by Tanishq | YouTube

An advertisement by Titan Group’s Tanishq Jewellery featuring an interfaith married couple has received severe backlash on Twitter, with ‘#BoycottTanishq’ among the top trends

‘Love jihad’ is an abhorrent, insidious, reactionary, patriarchal, misogynist, and anti-Muslim political project of Hindutva forces to undermine liberal, secular, and constitutional democratic society in India. The freedom to love and marry in India is part of the right to life and liberty guaranteed by the Indian constitution. It is further fortified by the Special Marriage Act (1954), which upholds the secular character of individual right to love and marry outside one’s own religion and caste. The secular, democratic, and constitutional rights are antithetical to religious lunatics. It is a threat to their well-established hierarchical authority over people. It is opposed to their unnatural and unscientific approach to life, love, marriage, and society. So, the perverted Hindutva forces and their right-wing religious brethren among Muslims, Christians, Sikhs, and casteist moral police find themselves in the same boat opposing the youthful spirit of Indians to love and marry outside their medieval social, religious and cultural order. These reactionary forces are the soul of honour killings. India’s latest National Crime Records Bureau (NCRB) report has revealed that honour killings are growing rapidly due to these religious and caste lunatics.

The state and governments are supposed to be secular and protect the constitutional rights of Indian citizens. But in reality, the Hindutva led governments are pandering to the beastly instincts of these right-wing religious, cultural, social, and political groups. The BJP ruled states are planning to bring legislation to make ‘love jihad’ illegal. The BJP and its debauched Hindutva family consider ‘love jihad’ as a trap of Muslim men to marry Hindu women and convert them into Islam, which will change Indian demography. Such Hindutva bogey of Islamophobic propaganda is not only statistically false but also dangerous for the civil liberties of all Indians irrespective of their religious and caste backgrounds. The objective of such ideological propaganda is to malign Muslim communities and ensure caste-based hierarchal and hegemonic Hindu social, political, and religious order, which is concomitant with other religious right-wing forces. The law against ‘love jihad’ is primarily against the freedom of youth. It is fundamentally against progressive social and political transformation towards an egalitarian society in India.

‘Love jihad’ derives its ideological inspiration from the bigoted writings of M.S. Golwalkar and his ideas outlined in his book; “We, or our nationhood redefined”. Golwalkar has argued for the purity of the Hindu race. The Hindutva forces like Rashtriya Swayamsevak Sangh (RSS), Bajrang Dal, the Vishwa Hindu Parishad (VHP), Akhil Bharati Vidyarthi Parishad (ABVP), and BJP are following the footprints of Golwalkar and his reactionary ideas. The Brahmanical Hindu purity project of Hindutva derives its intellectual strength from the fraudulent works of U.N. Mukherji and particularly his book “Hindus: A Dying Race” was an inspiration for the Hindu Maha Sabha. The campaign against ‘Love Jihad’ by the Hindutva fascists today resembles the assertive mass mobilization of Hindus by the Arya Samaj and other reactionary Hindu revivalist organisations during the 1920s. The purification movement led by several Hindu organisations during that period echoes today.  Love jihad is an extension of the purity of the Hindu race based on Brahmanical and patriarchal caste order, where women and men are subservient to its social, cultural, religious, and political hegemony.

The perverted Hindutva forces watch porn in state assemblies, rape women, maim and lynch fellow Muslim citizens in the name of cultural and religious nationalism but preach about protecting women from ‘love jihad’. There is a striking similarity between Muslim and Hindu fundamentalists when it comes to the idea of love and marriage. Their method of command and control of individual freedom follows a similar ideological pattern. The goal of these religious groups is to oppose the equality and liberty of individuals in the matters of their everyday lives. The spectre of love hunts the religious and right-wing groups because love is a great equalizer in society.

The narrow silo of religion and capitalism destroys all material and spiritual foundations of love and life. Both capitalism and feudal religious forces institutionalise love for reproduction. In capitalism, love depends on caste, class, and racial compatibilities to preserve their inheritance with the help of marriage for reproduction, accumulation, dominance, and preservation. The religious forces promote love as an idea of purity and honour confined within women in particular and men in general. These forces tend to locate purity and honour in food habits, dress, body, and sexuality. The domestication of love and its institutionalisation is central to both capitalism and feudal religious forces. It destroys human beings’ organic love and relationship with fellow human beings, nature, and animals.

Love jihad needs to be a social, cultural, religious, and political project of all progressive, liberal, and democratic forces in the society. Interfaith, interreligious, interracial, inter-caste, and community marriages are central to defeat the reactionary religious order, which reinforces and sustains all forms of inequalities. Therefore, the struggle for equality is a struggle to defend the idea of ‘love jihad’. Love is the only way to overcome different caste, class, and gender barriers. Love can only create a shared space of peace and collective security. Love can only defeat the capitalist project of the commodification of human lives and liberties. Love can only defeat the capitalist pandemic of loneliness and help human beings to overcome alienation in a capitalist society.

The collective struggle in defence of ‘love jihad’ is important to reject Hindutva-led Islamophobia and ensure Indian youth’s constitutional right to love and marry whomever they like and divorce whenever they want. Love and relationships are not supposed to be non-living entities or unchangeable commodities in the name of stability, family, and society. ‘Love jihad’ is a potential weapon against all forms of bigotry. Love can be used as a tool of all emancipatory struggles. Love, live, and laugh to launch a continuous and united struggle against all religious and reactionary forces for the sake of peace and survival of human lives. On every page of history, love always wins and the power of kings and their empires always failed in the survival test of time. Love survives within all odds of time.