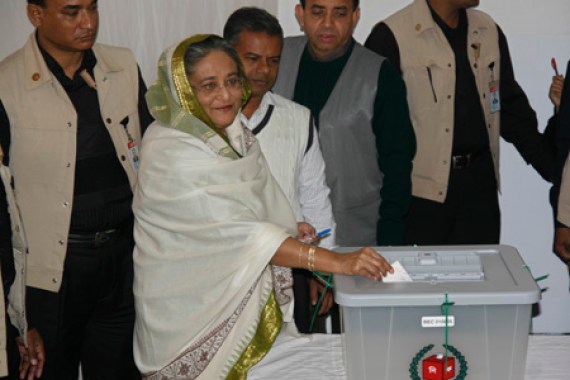 Dhaka–Bangladesh has been in the news a lot since last year, largely because of the Myanmar army’s brutal crackdown on the minority Muslim Rohingyas aimed at driving them out of Rakhine state through systemic killing, rape, and arson.

Predictably, national and international news media devoted considerable airtime and newspaper space highlighting the horrors inflicted on the hapless refugees. That interest has now declined after it became clear that the refugees would be here for a long haul and no immediate solution to the crisis was in sight.
Instead, news organizations, particularly local ones, are now abuzz with ongoing City Corporation polls and the upcoming national elections due at the end of this year.

National elections are a big deal for any country and not surprisingly they generate a lot of interest among the electorate. But here the voters seem largely indifferent and somewhat dismissive about the next election.

A casual conversation with thinking elite and ordinary folks alike elicit nonchalance and snigger about who would emerge victorious in the polls.
“Election! What election?” shot back Muktar Hossain, a taxi driver, with an impish smile. He hails from Rajbari district, about 125 km south of Dhaka.
“When I know, I can’t vote freely and without fear why should I bother about going to the polling booth in the first place,” he said.

“In my area, most of the BNP stalwarts have already fled, and the known opposition sympathizers keep a low profile lest they get picked by police or local Awami thugs,” he said matter-of-factly, referring to the main opposition Bangladesh Nationalist Party and the ruling Awami League.

Indeed, Hossain is not alone in expressing such reaction, and he should not be blamed for being so profoundly skeptical and dismissive about the election. And one doesn’t need to be a longtime Bangladesh watcher or an expert to understand why such widespread apathy exists.

Having witnessed the events in the run-up to the recent City Corporations’ voting, which was marked by widespread abuse and election engineering that ensured the victory of the ruling party candidates, it’s now a foregone conclusion about what is going to happen in the national election.

To put it more bluntly, it’s going to be a replay of the 2014 election and Prime Minister Sheikh Hasina would return with a thumping majority, forming the next government.

Let me explain. First, in the 47 years since Bangladesh seceded from Pakistan becoming an independent nation in 1971, no party in power has ever lost an election. This is the naked truth and the shameful reality, which the nation has to live with for years to come.

Second, the Election Commission, which is supposed to be independent and neutral, has always been used as a tool of the party in power to do its bidding and there will be no exception this time. To be fair, the only time EC has done a commendable job when a neutral caretaker administration is at the helm. Past experience shows that every ruling party miserably lost during the four elections held under that system since it was introduced in 1990 to ensure free and fair polls.

So it came as no surprise that the ruling Awami League quickly welcomed the Supreme Court verdict in 2010, nullifying the caretaker system on the ground that it was unconstitutional.

The highest court, however, observed that the system could continue for two more terms in order for the democratic institutions to be strengthened, the rule of law established and the voting system stabilized.

But knowing what could be the fate of the ruling party in elections held under the caretaker system, the Awami League, with its two-thirds majority, swiftly moved to amend the constitution in 2011 and restored the previous system of conducting the polls under the governing party.

What followed had been a foregone conclusion. Just to jog your memory, in 2014 election the opposition BNP, protesting Awami highhandedness, nakedly pro-government police and paramilitary forces and the ineffectual Election Commission, refused to participate, resulting in the sweeping victory of the ruling party including the shameful, unprecedented win of 154 candidates, who were elected unopposed in the 300-seat parliament.

As one might expect, the sham election produced a government, whose legitimacy came under fire from all and sundry. This perhaps explains why the Hasina government is trying to woo the BNP to join the upcoming polls.

This begs the question: Will the participation of BNP would make any difference this time? Before answering the question, one needs to ask whether the party is prepared. With Khaleda Zia, the BNP chief, in jail serving a five-year sentence for corruption, and most of its senior leaders facing numerous court cases, ranging from graft to arson to violence, the party appears to be in complete disarray.

The only other person who could put up a real fight is a fugitive. Tarek Rahman, Khaleda’s son, and an anointed successor have been living in London since 2007. In February, he was awarded a 10-year sentence in absentia for corruption.

With no significant leader in sight to mount a challenge against the government, the BNP seems rudderless. For some time now, the party exists only in newspapers and on television and its activities appear to be confined only in holding press conferences and issuing statements criticizing the government misrule. The practice has become so routine and mundane that hardly anybody takes note.

This seemingly ludicrous exercise is nothing more than an attempt to avoid slipping into irrelevance. It also underscores how pathetically disorganized and powerless the party has become to mount any huge street protest involving BNP activists and supporters that would have forced the Hasina government to buckle. And it’s unlikely that ordinary folks, fed up with Awami League misrule, would rise up to install a party in power that itself is not beyond reproach and deeply tainted with corruption.

Does it mean the chances of the main opposition to return to power are doomed?

The answer is an emphatic YES. Barring miracles, it seems the BNP and Khaleda Zia, whom The New York Times called “imperious medieval queen” have to linger in the wilderness for the foreseeable future.

Two factors, however, could have altered the scenario but those seem to be firmly in Sheikh Hasina’s favor—army and India.
Given the history of military intervention in Bangladesh politics, the prevailing atmosphere—utter lawlessness, corruption, forced disappearance of political opponents, extrajudicial killings and widespread human rights violation—provides an ideal opportunity for the army to take over as it did three times in the recent past.

But there is no telltale sign that it would be tempted to do so again, in part because they are well looked after and partly because they have been chastened after witnessing what happened to its coup leaders.

Gen. Ziaur Rahman, the first coup leader and founder of BNP, was assassinated in 1981; Gen Ershad, the second usurper, was in solitary confinement for six years in which he attempted to commit suicide twice in the 1990s; the third one, Gen Moin. simply disappeared after the 2009 election which brought Sheikh Hasina back to power after nearly a decade in the opposition. The lesson the army has learned appears to have been: “It’s easy to capture power, but you pay a heavy price to get out of it”.

That brings the other factor to the fore—India. The giant neighbor has been a crucial player in Bangladesh politics since its birth. Having helped the country gain independence in 1971, New Delhi has always been careful to make sure it has a friendly government in its backyard. And it cannot afford to make the same mistake it did in 1975, which saw the overthrow of the country’s founder Sheik Mujibar Rahman, paving the way for two successive anti-Indian governments, which were closer to Pakistan, India’s arch enemy.

In my conversations with two senior Indian policymakers, who served as the country’s high commissioners in Dhaka between the 1980s and 2000s, bluntly said they would not like to have any government in Bangladesh, which is hostile to India.

“We’ll never allow any anti-Indian party to come to power in Bangladesh,” one of them said bluntly. He later rose to become India’s foreign secretary.

The other Indian official made no bones of his distaste for BNP and its leader Khaleda Zia, known for her rabidly anti-Indian stance. “What’s the point of wasting my time with her when I know for sure what she feels about us,” he said when I asked him whether he could convince Begum Zia about the benefit she can have by being friendly to India.

“Deep in her heart, she believes that Hindu is evil and India is Hindu,” he said.

Some recent developments indicate that senior BNP leaders have realized that they must shed their hatred towards India and satisfy them in order to get to power.
Just last month, three BNP leaders—Amir Khasru Mahmud Chowdhury, Abdul Awal Mintoo and Humayun Kabir—traveled to New Delhi in an effort to convince Indian leaders and policymakers about their intention to make amends.

Their sojourn apparently produced nothing as they could not meet any important government or ruling BJP leaders.

This should make amply clear that the ruling Awami League will form the next government and Sheikh Hasina will continue as prime minister as long as she is in good health and unless the providence strikes.

If you’re still in doubt, take note of one of her very recent public pronouncements.

“Bangladesh will celebrate the centenary of the birth of the founding father in 2020 for one year, and the nation will also celebrate the 50th anniversary of Bangladesh’s independence in 2021”, Hasina told a gathering of party activists in Dhaka last week (July 6), asking them to prepare for these yearlong events.
To be fair, the vast majority, like the ordinary people elsewhere, seem to have accepted the reality and are willing to live with it, largely because the economy is doing pretty good and most people seem to be benefiting from the robust growth.

It’s mostly the chattering crowd—experts, analysts, journalists—who are making the noise and rightly so. It’s hard for any thinking person to sit back and sulk when he or she sees so much chaos, utter lawlessness, and intolerance towards anyone who dares to question Sheikh Hasina and the Awami League.
Arshad Mahmud is a Bangladeshi-American journalist. He currently lives in Dhaka.