Hybrid Warfare: A New Face of Conflict in South Asia 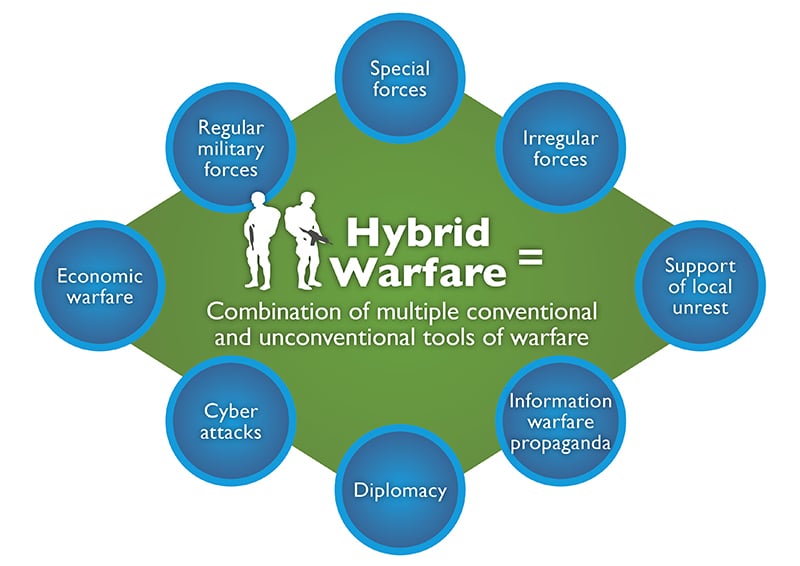 Hybrid warfare or hybrid threat seems to be the emerging modality in the changing nature of warfare.  In the nuclear era, more attention has been given to the sub-conventional conflicts, because of the lethality of the nuclear weapons; the deterrence being created by the nuclear-weapon states prevents other nuclear-weapon states to wage a total war, and international legal bindings of prohibiting the use of nuclear weapons against non-nuclear-weapon states eliminate the probability of an all-out war. Thus, the thrust of war has been envisioned by revisionist actors in the form of a new kind of warfare, predominantly through cyber-attacks and subversion, fake news campaigns, sponsoring of proxy forces, or even through economic blackmail. Hybrid warfare is a challenge, which brings into play an array of tactics and strategies thereby inflicting harm to the adversary, whilst exploiting the revolution in technological affairs. It targets the vulnerabilities of any society, with the aim to divide and dissuade the population, undermines the key institutions, and even deteriorates the bond between the states and international organizations. In a nutshell, hybrid warfare is a full-spectrum of war, which encompasses both physical and psychological aspects of the adversary.

Pakistan has also been the victim of hybrid warfare. Since its inception, India has been trying to wage a war or indulge in a conflict with Pakistan, in one way or the other. India is sparing no effort in targeting the domestic fault lines of Pakistan, which encompasses all the political, social, economic, and religious factors. They are leaving no stone unturned in defaming and maligning Pakistan in the international arena through its fake propaganda. Pakistani society is an amalgam of ethnic groups, sectarian faction, and cultural blocs, which is being exploited by India and is used as a fault line as a grey zone in conflict. India is operating radicalized militant group in Pakistan and is supporting the dissidents in Baluchistan. Moreover, Afghanistan’s land is being exercised by India in its endeavor to destabilize Pakistan by operating terrorist organizations for launching sub-conventional warfare inside Pakistan.

Considering the spillover of untrue and fallacious information, the complexity of warfare has tremendously being increased. India is involved in various operations against Pakistan in order to defame and discredit the country, in its pursuit to isolate it internationally as well. Its conspiracy of defaming and maligning Pakistan has also been put out in the EU DisinfoLab Report. According to that report, India is operating the largest ever fake media network, with 750+ fake media websites, and resurrecting the dead scholars, and propagating the false news in the international media. Moreover, it supported the objectives of right-wing politicians in attaining their objectives, in propaganda to support the minority rights and women-related issues. Moreover, India is also keenly involved in terrorists and separatists activities, and trying its level best to sabotage the economic project of Pakistan- the China-Pakistan Economic Corridor (CPEC), which certainly is a headache to the adversary. India is using a variety of subversive tactics of hybrid warfare, in order to destabilize Pakistan both externally and internally. Pakistan has encountered many security challenges successfully but has been prone to the non-traditional security challenge-the hybrid warfare, waged by India. Therefore, in the contemporary state of affairs, it is imperative for Pakistan to identify and efficiently counter the gradually escalating non-traditional threat.

There is a need to pen down a grand strategy for countering all the traditional and non-traditional threats posed by the adversary. Pakistan needs to devise a comprehensive strategy to counter the aggression of hybrid warfare. Pakistan will develop Hybrid Warfare and Stratagem Centre (HWSC), with its aim to address policymakers of the threats posed by the hybrid warfare, to make them susceptible of the threats and awareness for curbing them in the future. Moreover, the system to share sensitive information should be devised in order to spread the information through all the major civil and military institutions of the country. Moreover, media has to play a vital role in curbing the fake news propaganda and misinformation, as it is the most important tool used in propagating bogus information; besides, the media should strictly promote Pakistan’s narrative in fighting against the prevalent threat. Additionally, the law enforcement agencies should work in coordination with each other and should be properly trained and equipped to fight against this abstract threat, additionally, they should be able enough to smartly utilize Artificial Intelligence as well. It is imperative for the government to provide awareness and vigilance to the local population of the country, in order to make them aware of the actions and ill-will of the adversary in its attempt to dissect the society, as the objective is to target the common people. Hence, the cautious and observant society is the first and foremost step in the line of defense against this new challenge, and the entire country needs to play the role in curbing the spiteful act of the foe.