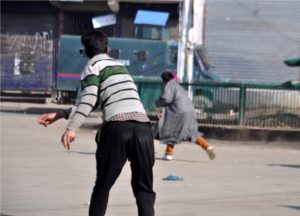 Kashmir is known as the paradise on earth. It Kashmir is known to be the crown of India’s secular democratic culture. Unfortunately, human rights abuses in Jammu and Kashmir are regular occurrence issues. The violations have badly impacted the livelihood of the people, their living environments, their health, their access to education and so on. The violations have affected each and every aspect of life in Kashmir including the women. They have often been the targets and survivors of violence suffering from trauma and injury because of the conflict. This paper will analyze the human rights violation in Kashmir in 2017. The year 2017 was the most violent year in Kashmir since the last decade. Every type of human rights violations took place in Kashmir

Following are some human rights abuses in Jammu and Kashmir in the year 2017.

Table Shows number of Killings in Kashmir in 2017

In the year 2107, the number of killings has raised in the state of Jammu and Kashmir as compared to previous few years. In 2017, a total of 451 people lost their lives due to the violence in Kashmir. This includes 125 armed forces, 217 militants, 108 civilians and one Ikhwani. The most number of civilians were killed in South Kashmir comprising the four districts namely Anantnag, Kulgam, Pulwama, and Shopian. 51 civilians were killed in these districts. In 2017, a total of 9 non local civilians lost their lives in Jammu and Kashmir. The year 2017 has been the most violent year from the year 2011.
Monthly wise killings of civilians in the year 2017

Monthly wise killings of civilians in the year 2017

Violence against Women
Killings
In 2017, a total of 20 civilian women were killed in the State of Jammu and Kashmir. Out of it, eight women Amaranth pilgrims were killed by suspected militants when they attacked the bus of Yatris in Anantnag. five women including a minor girl were killed near an encounter site in different places in the valley, four women died due to the LOC shelling from Pakistan’s side, one woman died due to the suffocation of intense teargas shelling by the troops in district Pulwama, one girl died due to the injuries she suffered from a grenade blast, and 1 women were killed by suspected militants at her home.
Incidents of Hair and Braid Chopping.

A mysterious human rights violation took place in 2017 in the form of Braid Chopping. The braid choppers targeted the women and chopped their braids. Nearly 150 cases of braid chopping were reported in the month of September-October. Latter it stopped by the end of October. However, the Police were unable to find the culprits. Regarding the braid, chopping police stated that” it is aimed at disturbing the peace; creating animosity between people and security forces, especially the police; and creating an atmosphere for fear and uncertainty for women to confine them to home so that the radical religious agenda of these elements is realized.” The police also stated along with Psychologists that the purpose of braid chopping was to create mass hysteria because there were reports of braid chopping from other parts of India as well and mass hysteria has been found to be the reason.

The inability of the police to act and catch the braid choppers led to the birth of vigilante in towns and villages. The Many innocent people were caught and thrashed by these vigilante mobs by suspecting them to be the braid choppers. In district Anantnag, a 70-year old man was thrashed and killed by the vigilante mobs. Not only locals, some non-locals who were tourists had to face the ire also. Two tourists were ruthlessly beaten by the vigilantes after they were mistaken for braid choppers. Many times Government had to close the educational institutions due to the fear among the students.
Enforced or Involuntary Disappearances
The Enforced disappearances continue in Kashmir in 2017. Although the cases of enforced or involuntary disappearances have significantly reduced in the state, the phenomenon continues to exist. In 2017, seven cases of abduction, enforced disappearances or involuntary disappearances were reported in Kashmir. Out of the seven cases, bodies of five victims bearing bodies of five victims carrying bullet, torture and other injury marks were later recovered from various secret positions. The families have continuously appealed the government for independent, impartial inquiry commission to investigate into the cases of enforced disappearances. The enforced disappearances have led to the circumstances of half widows in the state. These half widows have suffered socially, economically and politically.
Using Civilians as Human Shields

In 2017 during the parliamentary by-polls, a youth named Farooq Ahmad Dar, district Budgam was first tortured and then tied to an army jeep by armed forces led by Major Gogoi. Video footage in which he was tied to a jeep as a human shield went viral on social media. There were local condemnations, and international organizations also issue statements against it as well.

Major Leetul Gogoi of the 53rd Rashtriya Rifles refers to him as a stone pelter and to deter other stone-pelters and teach them a lesson; he used him as a human shield. But Police inquiry reported that “Dar cast his vote at a polling booth in his native village of Chill.” They claimed that he was a voter, not a stone pelter. The army claimed that Dar was “instigating a stone-pelting mob” and “could have been their ringleader”. The Army Chief described the Major’s behavior as “the right call.” Latter Major Gogoi was awarded commendation card for sustained efforts in counter-insurgency operations by the army chief.
Besides Farooq Dar, other reports were there in which a sumo driver namely Abdul Ahad Sheikh was allegedly used as a human shield in Kaczdoora village Shopian. He alleged that he was used as human shield by the armed forces during a militant attack on May 5. He accused that he was forced by the armed forces to transport its men from Kapran to Shopian area.

Use of Pellet Shotguns

The use of pellets guns continues in Kashmir in the year 2017. The Indian Home Ministry set up a committee in 2016 to find alternatives to pellet guns. Although there were reports that the pellet guns should be the last option on the ground, there appeared no change in using pellet guns against civilian protesters. In 2017, four persons were killed with pellet guns, and scores were injured among whom many lost eyesight due to pellets.

Instead of stopping the use of pellet guns, the Ministry of Home Affairs made new authorization of 4,949 pellet guns for CRPF units deployed as Rapid Action Force, and Mahila Batallion in J&K on March 2nd, making the total number of pump action guns to 5,589. The Supreme Court of India also asked the government to consider effective means other than the use of pellet guns to disperse protests in Jammu and Kashmir after observing that the use of pellets concerns life and death.

The Return of Cordon and Search Operations (CASO)

As per statics, more than 540 CASO’s were carried out in Jammu and Kashmir in the year 2017. Cordon and search operations (CASO’s) is a practice in which armed forces and police cordon in a village or a town and start searching the houses of the civilian population. During the early nineties, CASO’s were accompanied by crackdowns, during which the adult male population of an entire area, or a mohalla, were asked to come out of their houses and made to sit or assemble at one place and paraded before a masked informer. The frequency of cordon and search operations this year was not only alarming but suggested a return to the past. It was during these CASO’s that most of the militants were killed this year, and on occasion accompanied by civilian killings as the civilian population would try to break CASO’s resulting in a clash.

Media reporting in a conflict zone is always difficult, and Kashmir is not an exception. Many times the local journalists were assaulted by the armed forces. The media in Kashmir has faced killings, attacks, kidnappings and threats from both state and nonstate actors. At least twenty-one journalists have been killed in Kashmir since the early nineties. This year a Kashmiri photojournalist Kamran Yousuf was detained by National Investigation Agency (NIA) in September for his alleged involvement in ‘stone pelting’ incidents. This year, even a visiting French journalist was taken into custody by police and booked for allegedly violating visa norm. But the trial court issued the forces to release him immediately.
Banning on TV channels.

At least, 34 local, national and international media TV channels were banned in Kashmir. Some TV channels from Pakistan, Saudi Arabia, and Iraq were also banned in 2017 in Kashmir. The State Home Affairs Departments issue that “they have the potential to encourage violence and can disturb law and order situation in Kashmir, and are not permitted for transmission.”

Restrictions on the Internet and Social Media

Most of the time in 2017, there was a restriction on the internet and social media. Often the bandwidth is reduced considerably, making it difficult for people to post or download any information of public interest. Whenever there is an incident of killing of civilians at the hands of armed forces, or clashes between civilians and government forces, or encounter between militants and armed forces, one of the first responses of the authorities do is snap the internet services and thus choke the flow of information. The frequent internet shutdowns have not only impacted the functioning of media in Kashmir but have gravely affected businesses and the education of children.

There were other human rights violations in 2017 in the valley. There were restrictions for religious practicing. People were barred from practicing their religion in some places. Many times, people were also restricted to move from one place to another. There was a restriction on freedom of movements. Many pieces of evidence show that the security forces vandalized the public property in Kashmir. Some video was circulated which clearly shows that security is personally vandalizing public property. They also destroyed the paddy fields, vehicles, windows of houses c, etc. Many people were arrested on the basis of PSA. Many times the accused persons were freed after taking money from the people. In short, there were gross human rights violations in 2017 in Kashmir.