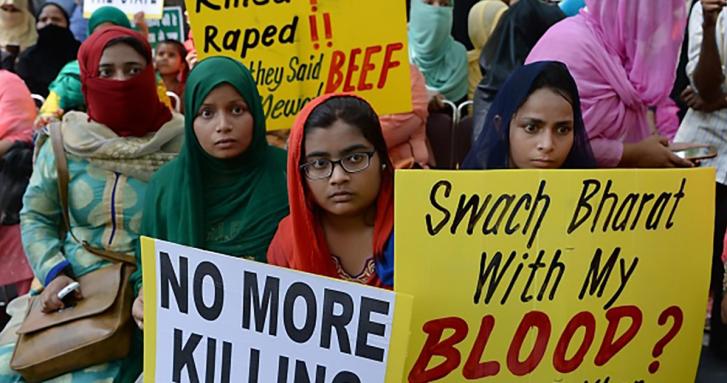 Discourse of human rights was India’s poster child until 1970s. India has played central role in mobilizing third world countries on issue of Self-determination and racial equality in United Nations General Assembly. However, blatant disregard for human rights is becoming norms in modern India under the regime of Hindu nationalist Prime Minister Narendra Modi. Mob lynching is what characterizes India today. Muslim and Dalits are being lynched on weekly basis since Modi came to power in 2014. A new pattern of justifying mob violence among Hindu nationalist leaders is increasing. Mob rule and the rule of fanatics have replaced the rule of law. People are publicly being killed for their faith. Minorities no longer feel safe in the country. Modi and his friends in the saffron brigade openly support such bigotry,  and there is stoic silence over condemning such incidence. Even the Indian Supreme Court has pushed the government to take steps against religious violence.

Fear of bigotry, threat of physical violence, and government-backed support to Hindu fundamentalist elements that discourages free-thinkers—students, intellectuals, and journalists—are rapidly growing. With Hindu nationalists trying to purge all manifestations of “anti-national” thought from the national debate, self-censorship is growing in the mainstream media. Journalists are increasingly the targets of online smear campaigns by the most radical nationalists, who vilify them and even threaten physical reprisals. Religious extremist pressure groups such as V.H.P (Vishav Hindu Parishad), Hindu Yuva Vashani, and Bajrang Dal are actively trying to censor the opposing narratives in the public space at the local, regional, and national levels via physical and legal threats.

If we dig deep into India’s society, human rights abuses seems imbedded into its societal norms such as Caste system. For millions of lower class Hindus also known as Dalits- social and structural discrimination and rampant violence- is a harsh reality in India. In fact, under current Indian rule, atrocities against Dalits[i] and Muslim minorities is high[ii].  Growing instances of mob lynching, is also a case in this point[iii].

India has been harsh while dealing with issue of ‘secession’ particularly against Kashmiri separatist. Struggle for Kashmir independence have been suppressed by force; current Hindu nationalist Indian government had adopted hard military stand towards secessionist political groups in Kashmir narrowing the path for constructive dialogue between the secessionist and government. For India, Right to Self-determination[iv] does not apply to Kashmiri secessionist which is clear case of India’s double standard on human rights. Recent report by the United Nations Office of the High Commissioner of Human Rights (UNOHCHR, 2018) on gross human rights abuses in Kashmir and its immediate strong rejection[v] by officials, demonstrate India no longer care the discourse of human rights once it championed while fighting against South African apartheid regime.

Almost, similar situation- if not worse as Kashmir-prevails in the Northeast part (Assam, Manipur, Meghalaya, Nagaland) of India where since 1947 sustained separatist insurgencies is going on and harsh government response have caused serious human rights violations (Bhaumik, 2007). In such disturbed areas most notorious is, Armed Forces (Special Powers) Acts (AFSPA) under which military can search and detain anyone without any court order[vi]. This act has been source of huge human rights violations in all secessionist areas (Human Rights Watch, 2008).

addition, India harshly dealt with complex problems of Naxalite movement[vii], Caste and communal violence which to some extent are rooted in socio-economic deprivation of Dalits, untouchable and Muslim minorities. Indian response often has resulted in human rights abuses of vulnerable groups of her society since police, judiciary and politics are dominated by the Hindu upper class majority religious group.

Interestingly, Indian government hardly pay attention on international condemnation on human rights abuses occurring within its jurisdiction. In spite of many resolutions have been passed in European parliament[viii] and United Nations regarding atrocities against Dalits and minorities, ironically, India continue opposing such condemnation. Furthermore, India is against the expansion of jurisdictions of International human rights regime and often on opposite side of the fence on human rights at the U.N. In fact, most of newly independent Third World countries which once resorted to human rights in their struggle toward independence objected to human rights claims as they became repressive regimes.

Hindu nationalist Prime Minister Modi came to power promising an agenda of inclusive development and to build a modern India. Under Modi India is moving from modern to regressive state. As we scrutinise some of events under Modi rule, it seems that democracy is in seriously troubled water.

Rise of nationalist Bhartiya Janta Party, led by Prime Minister Narendra Modi, came to power in India in 2014 has brought immense trouble for human rights activist, human rights defender and to those critical to government policies. The anti-human rights attitude of Modi government is reflected in the cancellation of thousands of NGO licenses and increased restrictions on NGOs, receiving foreign donations. Free expression is restricted; there is an increased hostility towards human rights defenders. Certainly human rights are going through a crisis situation in India.

Constitutionally, India is a secular country. However, a quasi-secular ideology has remained dominant in State affairs and certain privileges have been periodically made in favor of a religion and religious values. With advent of current Indian nationalist government in power, forces of religious-cultural nationalism came out from hibernation resisting any social political change challenging social status-quo in Indian society. This status-quo includes preservation of discriminatory Caste system and cultural hegemony of ruling classes of the Indian society. Nexus of Cast, Culture and religious fundamentalism are well entrenched in Modi government who came to power with their political clout. Human rights discourse has potential to unsettle their nexus. Therefore, those challenging this nexus have to suffer.

tain social-political status-quo Modi government discourages any human rights movement of civil society and encourages religious-nationalist Hindu groups. Those whose social-political interests are jeopardized due to human rights and social change, are from primarily business class, and upper/middle Caste Hindus. Thus, religious-nationalist forces are aggressively contesting and are trying to limit liberal space for those working to bring social change and promote human rights. Anyone, questioning Hindutva’s hegemonic idea of religion and nationalism is risked being labelled as an anti-national. Religion and politics are now seemingly deeply entwined more than ever.

Religious Nationalist forces are afraid from egalitarian discourse of human rights, as this could challenge their cultural production of myths and legend, once meant to enslave minds of fellow countrymen known as Dalits. To control human rights thinking, one the one hand, those in power make sure no room left for alternative interpretations of History thus dissent and critiques being silenced, on the other hand, to ensure religious-nationalist version of history and religion prevails pseudo-academics with Hindutva ideology being placed at the strategic academic positions.  Appointments of Gajendra Chauhan as the Chairman of Film and Television Institute of India,Y Sudershan Rao as the Chairperson of Indian Council of Historical Research, and Lokesh Chandra as President, Indian Council for Cultural Relations are such controversial appointments done with intention to allegedly carry forward the party ideology to publicly run institutions.

Indian civil society openly challenges unequal status-quo. Promotion and advocacy of human rights values directly hurt political and social interest of those in power. In this scenario, those who are critical to government policies are termed as an anti-India. Associating with human rights discourse could be seen as working against nation and supporting foreign powers. Also, government to hide its inability to redress structural human issues such as Caste discrimination, Police torture, poverty and corruption simply rejects human rights discourse.

Indian government covertly and overtly supports religious-nationalist Hindutva groups suppressing human rights voices in society. In a bid to assert power and control over the lives of civil society, an attempt is being made to impose religious-nationalist ideology on everyone. Intellectual differences are settled via assassinations. No wonder individuals from hard core Hindu religious groups were responsible for murder of intellectuals like, Gauri Lankesh, Malleshappa  Kalburgi and Govind Pansare- both were rationalist thinkers, outspoken against blind religiosity and superstition were silenced by Hindu fundamentalist.

Prominent Indian Human rights activist, Dr. Lenin Raghuvansi is concerned about rise of Hindu fascist forces  working to stifle human rights voices, however, he hope common people would see true colours of such fascist forces during this turmoil. Lenin pointed out, this conflict could slow ongoing social change but it is responsible for bring an opportunity for revolutionary social change too. It is pregnancy of real plural democracy in India, so it is mix bag of pain, happiness, joy, struggle and hope. Interestingly, Hindutva ideology of “cultural nationalism ” do not match with universal discourse of human rights. Though Hindu religion was once synonymous with tolerance, however in the hand of nationalist, it has become hegemonic intolerant discourse. Thus, those vocal against structural human rights issues such as Caste discrimination are termed as an anti-Indian. Rohith Vemula and Kanhaiya Kumar are such examples.

In India, discourse of human rights is still at the nascent stage. Bureaucracy works actively to discourage human rights activist from raising human rights concerns at International human rights forums such as United Nations.  Amnesty International Report 2012, blamed India of “complicity” with “opportunistic alliances” in ignoring human rights violations in the region and elsewhere. Though National Human Rights Commission of India is a silver lining of hope in such a human rights crisis, however, its limited resources and financial dependence on government blunt its efficacy.

Ironically, majority of the current politicians are inward looking and lack the vision required for a society where human rights can flourish. Sadly enough, some politicians are thriving on cheap communal political theatrics pushing human rights agenda away. In addition, majority of public intellectuals succumb to self-censorship and have been less vocal on human rights issues thus critical debate on human rights issues are limited in public spheres.  Threats, intimidations and the possibility of violence by fringe religious-nationalist groups are a significant factor discouraging human rights discourse in Indian society.

[iv] Interestingly, Upendra Baxi believe that human rights to Right to Self-determination excludes the rights of secession, The Legalization of Human Rights, edited by Meckled-Gracia and Calhi, Routledge, New York