A massive fire damaged thousands of makeshift shelters at a Rohingya refugee camp in southeastern Bangladesh on Monday, officials said, but could not immediately confirm reports that there were casualties.

Firefighters took more than eight hours to extinguish the blaze, which was fanned by high winds after it broke out in the afternoon at the Balukhali camp, Bangladeshi refugee relief and repatriation officials said.

“As of now, as many as 7,000 houses have been damaged – 2,000 houses are completely gutted, the remaining 5,000 houses are partially burned,” Mohammad Shamsud Douza, an additional commissioner for refugee relief and repatriation, told BenarNews.

There were reports of casualties from various sources, said Rashedul Hasan, another official with Bangladesh’s refugee relief agency.

“But that can’t be confirmed now. The fire spread very quickly as the houses were in a very congested environment and there were strong winds,” he said.

“It will take a long time to tell the extent of the damage caused by the fire,” Douza said, adding that the blaze was the largest of at least 25 major fires in Cox’s Bazar camps since 2017.

Most of the 1 million Rohingya who fled from neighboring Myanmar live in 34 refugee camps in and around the district, including more than 740,000 who escaped a brutal military crackdown in nearby Rakhine state in 2017.

Many refugees said they were still looking for their relatives after Monday’s fire.

“I don’t know if they are alive. This is the worst fire incident in the camp,” Noor Habib, a resident of the Balukhali camp, told BenarNews.

“Many children cannot be located … one of my grandsons is also lost,” Shamsul Alam, another resident, said.

Richard Ragan, Bangladesh director of the United Nations’ World Food Program, said the number of houses damaged in the fire was many more than 7,000.

The blaze destroyed more than 15,000 shelters and displaced more than 50,000 refugees, he said via Twitter.

“We have learned that the fire broke out at camp number eight and spread swiftly to the shelters in the congested camp,” Hasan said.

Tayeba Begum, a volunteer at Save the Children, an NGO, said refugees were running helter-skelter as they tried to escape the flames.

“The fire spread so quickly that before we understood what happened, it caught our house,” Tayeba said, according to a news release from the NGO.

“People were screaming and running here and there. Children were also running scattered, crying for their family. It is the most horrific incident I have witnessed recently.” 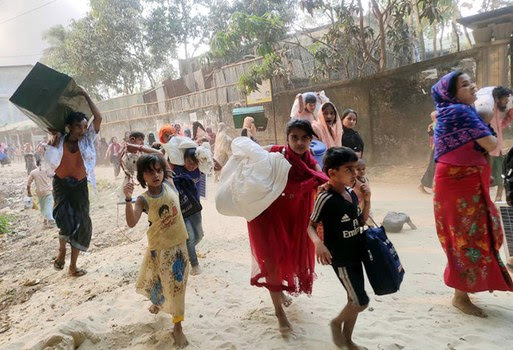 Rohingya refugees flee with their belongings after a huge fire in the Balukhali camp in Cox’s Bazar, Bangladesh, March 22, 2021. [Sunil Barua/BenarNews]

UNICEF said it heard reports that children were among those injured.

“While the situation continues to evolve into the late night, initial reports are that children are among the injured, and that there are also children who have been separated from their families,” the U.N. agency said in a statement.

“While large-scale evacuations have taken place, the full extent of the disaster is yet to be confirmed.”

Thousands of refugees who lost their homes are looking for alternative shelters, refugees said.

“They have lost everything. Some are moving towards the Kutupalong camp,” Md. Sukkur Majhi, a Rohingya leader, told BenarNews.

Douza said officials were trying to relocate the displaced Rohingya.

Camps: At high-risk for fires

According to the fire service, a total of five fires have taken place in refugee camps this year, including Monday’s incident.

In a massive fire at a camp on Jan. 14, more than 550 shelters were gutted, leaving some 3,000 Rohingya homeless, but there were no fatalities.

The risk of fires is high in the sprawling camps, said Onno Van Manen, country director for Save the Children.

“It is another devastating blow to the Rohingya refugees who live here. Just a couple of days ago we lost one of our health facilities in another fire. The risks of fires in these extremely densely populated and confined areas are enormous,” Van Manen said in a statement.

“We are worried about the impact this event will have on children: those who will have lost their homes, learning centers and child-friendly spaces in the blaze. We are also concerned with the mental health impacts of experiencing such a traumatic event,” he added.

Abdur Rahman contributed to this report from Cox’s Bazar.