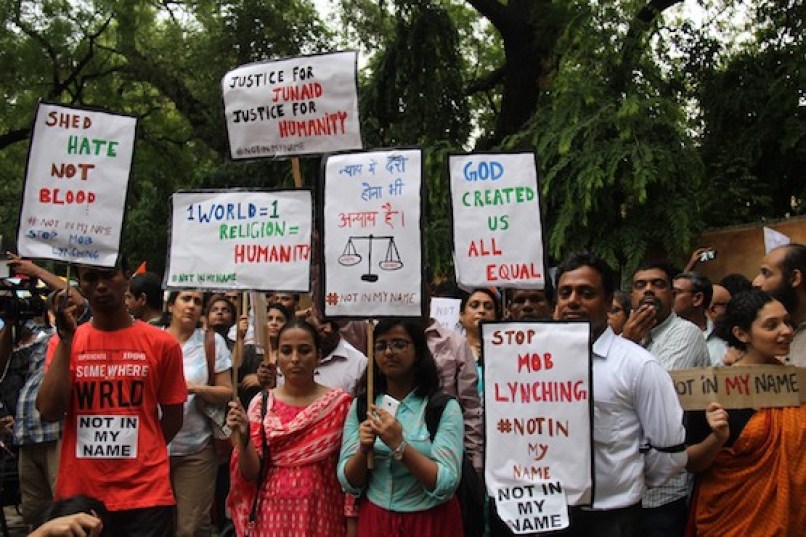 Hundreds of civil society members protest in New Delhi in this June 2017 photo about incidents of mob lynching across India. Human Rights Watch has criticised the government’s inaction over violence against religious minorities. (Photo by Bijay Kumar Minj/ucanews.com)

Civil society groups in India have backed a Human Rights Watch report that condemns the unabated violence that religious minorities suffer at the hands of right-wing Hindu groups.

An increasing threat in 2017 was “vigilante violence aimed at religious minorities, marginalized communities and critics of the government” by groups claiming to support the ruling party, it said.

The report listed several cases of violations including army excesses in the disputed Kashmir region and unequal treatment of India’s indigenous and Dalit people, who were formerly considered untouchable.

“Dissent was labeled anti-national, and activists, journalists, and academics were targeted for their views, chilling free expression,” the report said.

Those responsible for such attacks need to be prosecuted to prevent future attacks, she said.

The report confirms what Indians have been witnessing in the past four years since the BJP government came to power, said Pravin Mishra of human rights organization Jan Sangharsh Manch (people’s resistance forum).

“India is passing through a very turbulent period. Such violence against minorities was never witnessed since the partition of the Subcontinent in 1947,” Mishra told ucanews.com.

The BJP now rules 19 of India’s 29 states and “one can see the graph of violence against Muslims, Christians and Dalits has spiraled specifically in BJP-ruled states,” Mishra said.

P.T. John, the general secretary of a tea planters’ union in the southern state of Kerala, told ucanews.com that the government makes no effort to protect minorities.

“Hindu groups who keep targeting minorities defend their actions while protecting themselves as nationalists. They are making a mockery of the law and of the country’s Supreme Court,” John said.

Dalit leader Vinay Kumar, a member of the National Federation for Dalit Land in India, told ucanews.com that oppression of minorities is nothing new in India but it has deepened since the BJP came to power.

Hindu hardliners often present Christians and Muslims as foreigners in India, which belongs to only Hindus. “With such a mindset in place, how can minorities feel secure in the country?” Kumar asked.

Right-wing Hindu groups were once dismissed as “fringe elements” but they cannot be considered so anymore as the ruling party depends on their support and attacks have become regular.

Hindus in India number 966 million in a population of 1.2 billion, but Muslims are a considerable minority as they form 172 million. Christians are hardly 28 million and constitute less than one percent in most northern states, where they mostly face violence from Hindu groups.