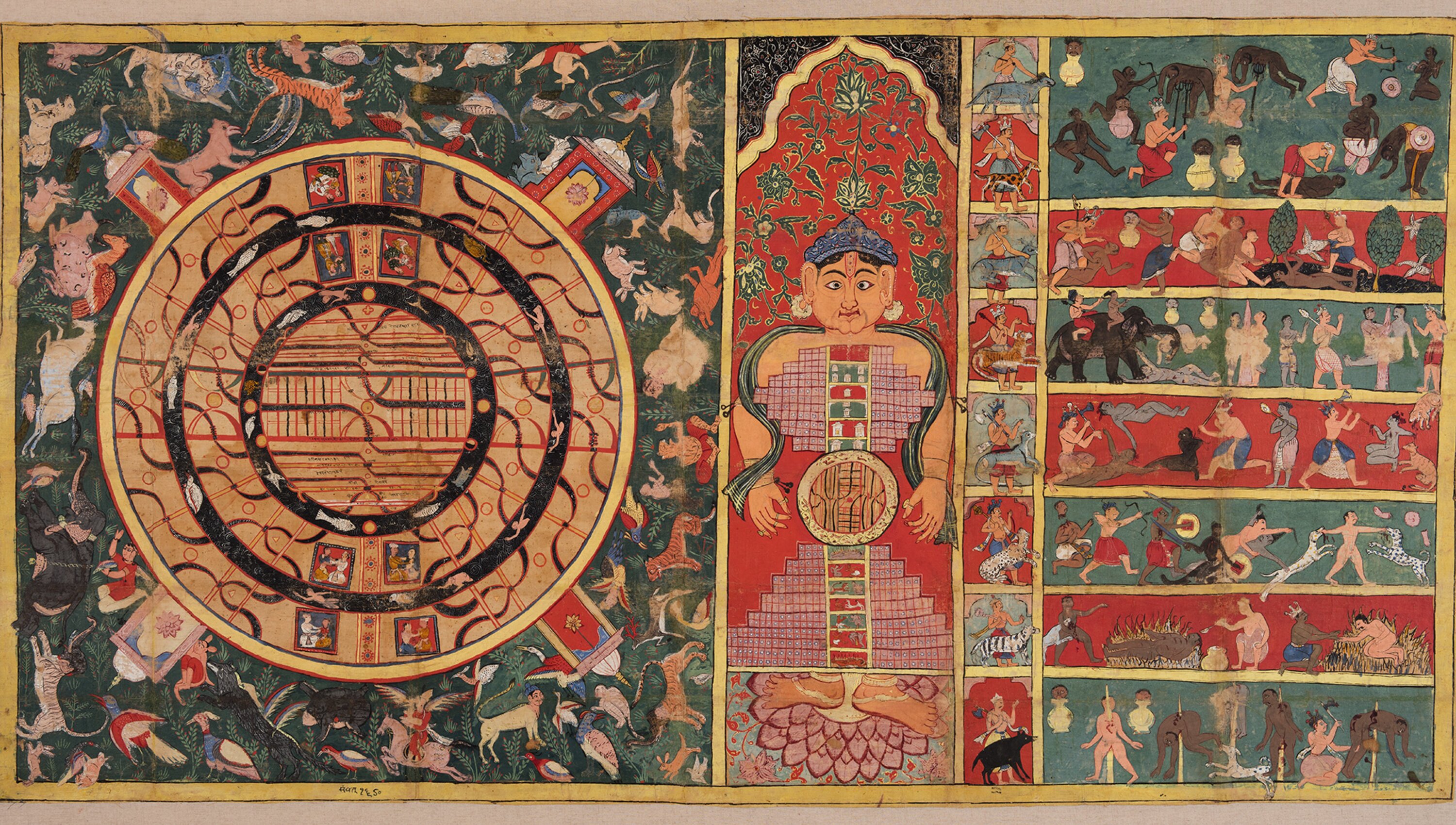 Diagrams of the Universe: The Two-and-a-Half Continents, the Universe in the Shape of a Person, and the Seven Levels of Hell, Gujarat, India, 1613. Courtesy the Cleveland Museum of Art

Although the extent to which empirical analysis of terrorism be approached as an art or science may be a hotly debated issue but it must not be devoid of genuine consideration of prevailing actualities behind the phenomenon of terror. That obviously needs inside approach in addition to empirical outside approach to comprehend the phenomenon in right perspective so as to arrive at desired solution to ensure a peaceful and secure world. Viewing terrorism this way may finally lead to draw a clear position to analyse both terrorism and terrorist behaviours so as to devise an effective counter-terrorism strategy. That needs to uncover hidden structures of its practitioners to make terrorism unprofitable and scarce. Again, if it is considered a science there are important differences between those who seek to emulate natural sciences like physics and chemistry, and those who believe that the study of human beings is inherently from the study of nature in its nonhuman manifestations. Because notwithstanding the on-going efforts for empirically analysing the terrorist pathology, it demonstrates how frighteningly abnormal and unremarkable in psychological terms are those who are engaged in terror acts thereby establishing lack of any identifiable psychopathology in a terrorist exploring its nonhuman manifestations.

These nonhuman manifestations appear to be the key to investigate terrorism as a phenomenon because that can reasonably explain as to why it is not being eliminated despite practising the best deterrent, preventive and counter-terror measures. Instead of understanding the phenomenon of terrorism through eyes of matter, it would be better to comprehend the idea behind this phenomenon. Hence modern gadgets be invented to map the mind of terrorists and safely deduce hidden information and secret plans of terrorism. Also available brain-mapping and brain-scanning devices be so- programmed which may conclusively determine the mind of terrorists. The fast expanding technology of rays and laser beams may become helpful in extracting the required information from terrorists to ensure security and protection of the entire humanity. Thus apart from continuing preventive and deterrent measures, following may prove useful with help of scientific inventions and technological innovations with skill upgradations:

Thus the role of precise-point intelligence and deterrence becomes very important in any counter-terrorism strategy. One of the greatest failures that allowed the July 2005 terror attacks in Britain and 26/11 terror strike at Mumbai in 2008 to succeed was the poor availability of adequate IT devices and preparedness. The well-planned and coordinated crime and criminal tracking network system is therefore, the need of the hour in the world. These systems are extremely necessary for fighting terrorism that countries like India continue to face since many decades and that has risen due to Taliban-2 assuming power in Kabul and recurrent violent events therein and Pakistan. Though, they present only context, connectivity and coordination which help in joining the missing points in connection with vital secret information and that require regular updating.

As is being seen in the US, Britain and Israel that deterrence has directly stalled terrorist attacks. Sometimes deterrence will only delay attacks or displace them onto other targets. But precious lives can be saved if terrorists are denied their target of choice, and delay can make available time for successful counter-terrorism measures. In fact, deterrence also stands for effective and visible security measures that can create fear and confusion in the minds of terrorists about the possibility of being unsuccessful in their mission. Even such terrorist as human bombs or suicide bombers also fear of being caught or imprisoned. Further, the deterrence in order to be successful required the installation of high-tech gadgets like programmed computer monitored sensors able to detect any kind of explosive hidden inside any part of human body, improved scanners and metal detectors etc. at all important and sensitive places. Despite all these instruments, highly well-trained and alert police and security staff are extremely vital for successful deterrence.

Further, the counter-terror measures must be regularly modernized and upgraded and sincere cooperation be sought from all over the world. Today the world needs special anti-terror laws and fast track anti-terror court as the current legal framework is highly ineffective and hence often misused by terrorists. Above all, it needs political will to hang culprits found guilty and finally convicted. Because that will send the message of zero-tolerance by states and will deter the prospective terrorists. Unfortunately even convicted criminals get escape-route from punishment due to selfish interests of secret agencies in few rogue states which use them into launching guerrilla-war and cross-border terrorism against their enemy states. As seen in case of Pakistan, Lebanon, Syria, Libya, Turkey, North Korea etc. where leaders seek help from terror outfits to settle their scores with their enemy states. Pakistan is well-known for exporting cross-border terrorism into India with the help of terror-outfits like J-e-M and HUJI. As happened that Islamist-militants were dispatched by Syria, Turkey and Pakistan to support Islamic Azerbaiajn fighting against Christian Armenia in their war over Nogorno-Karabakh region.

But all these measures are not final as the nature of terrorists can’t be thoroughly uncovered and investigated to the core of their heart and that obviously requires continuous efforts towards consistent innovation and upgradation for fighting the terror menace. As the issue at stake is how to transform the evil-psyche of terrorists reflecting their traumatic mentality emerged out of their mind-based rationalities which must pave way to extra-mental consciousness to play its role to balance their persona with a view to distract them from violence and terror forever so that they may understand their soul journey and life purpose for their own good and welfare of all.

While the battle against terror is to be fought both at geopolitical, military, criminal-investigation front, accompanied by ideological and ideational substitutes, the entire world can no longer afford to postpone systemic reforms which must frame a fix and firm definition of terrorism so that there may not be any escape route to dilute the punishment to be incurred on any terror act. Also more transparency in administration and government functioning, greater democratization, decentralization and devolution of powers will encourage people’s participation and rising opportunity of education will lead to greater mass mobilization towards self-realization, social harmony and nation building. All these will help uproot the sense of alienation among all people.

Since India continues to be the most vulnerable grazing ground for terrorists since long and had lost two prime ministers besides thousands of innocent people, security forces and army men in numerous terror acts, it obviously needs strict rules, cent-percent prosecution and conviction in terror-crimes and fool-proof security measures to save the country.

Thus if terrorism is to eliminated forever, the present conditioning of mind-based rationalities regarding terrorism reflected in the dominant Western intellectual tradition in international relations or phenomena will have to be suitably modified to pave way for incorporation of extra-mental consciousness or noumena, incorporating eternal-universal moral values and universal-cosmopolitan outlook, reflecting constructive idea like love, peace or brotherhood. Indeed these had been understood by the ancient Indian sages and seers who were well-aware with underlying essentials and inherent rationales of the cosmos through their inner strength of character, temperance and austerity. And that they taught to the human-beings for their welfare and ultimate salvation as highest goal of the human life in the mundane world thereby ensuring their own sublimation and ultimate salvation. If these universal-cosmological features are incorporated into the educational curricula of all educational institutions, accompanied by the necessary deterrent and preventive responses, the security of the world and survival of the humanity may largely be ensured, including rehabilitation of the terrorists into national and global mainstreams. These noble sentiments can help-restrain terrorists and radicalised fanatics and it can ultimately prevail upon them through consistent pious and peaceful teachings of religions and other moral discourses. They essentially need regular preaching of eternal-universal values along with yoga and meditation. Their diet be also vegetarian and alcohol and sedatives be banned. Their daily routine be in consonance with nature to ensure simple living and noble thinking. Evidently, these may pave way towards ensuring perfect-beautiful balance in overall human relations and behaviours of even terrorists. Notwithstanding above-mentioned preventive and deterrent measures until total elimination of terrorism in the world is accomplished, the terror-phenomenon must be eclipsed by true essentials of nature, reflecting idea of love, peace, truth and non-violence.