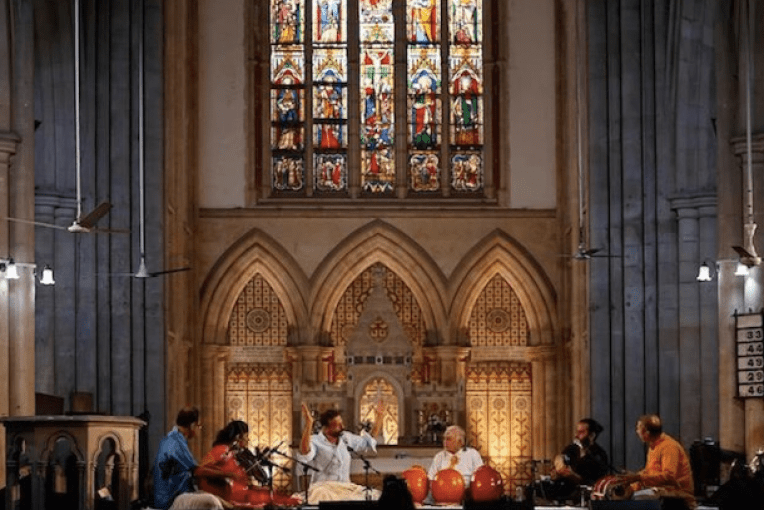 T.M. Krishna performs at the iconic Afghan Church in Mumbai on Dec. 17, 2017. He believes in using music for interreligious harmony by singing songs of Christian and Islamic themes using the Carnatic school of music, considered a bastion of upper-caste Hindus. (Photo courtesy of thenewsminute.com)

Carnatic singer O.S. Arun canceled a performance after he was severely criticized on social media and accused of helping Christians to proselyte and convert Hindus.

Arun’s announcement of his appearance triggered a social media backlash in which he was called a “traitor” and a “Vatican stooge” along with a call to boycott his concerts.

He later tweeted that he was canceling his performance. He told media that he decided not to perform “because I couldn’t deal with the pressure.”

A fringe Hindu group also threatened Arun and other Carnatic singers who perform Christian songs with violence and a boycott of their concerts.

Buckling under pressure, another singer, Nithyasree Mahadevan, said in a social media post that she “… will no longer sing Christian songs or collaborate with Christian musicians.”

Carnatic music was developed by upper-caste Tamil Brahmins of Hindu tradition. The other major classical form in India is Hindustani, which is popular in the north.

“Carnatic music is highly entrenched in the Brahmanical Hindu system and they have actively encouraged this controversy,” said Carnatic singer and critic T.M. Krishna, who won the 2016 Magsaysay Award for music.

People who support Brahmanical hegemony in music “think Carnatic singers are one of them and feel betrayed that they are not acting as per their bigoted beliefs,” Krishna told The News Minute, a web news portal.

He said those who support Hindu upper-caste dominance in Carnatic music denounce the idea of having devotional music developed for any other religion in Carnatic style.

“This is the time for musicians to take a firm stand. You should either say you are doing it for money, which is a professional reason, or you truly believe that Carnatic music is not only for Hindus. This is not the time to get defensive,” Krishna said.

Krishna tweeted on Aug. 9 that after threats he will be releasing one Carnatic “song every month on Jesus or Allah.”

Jesuit Father Joe Antony, former editor of The New Leader Catholic magazine, told ucanews.com that the controversy “is yet another instance of right-wing Hindu groups trying to intimidate anyone who does anything opposed to their agenda.”

He added: “What is surprising and sad is that such incidents have begun to occur in Tamil Nadu, which for a long time was immune to such tactics of hate mongers.”

In Tamil Nadu and neighboring Kerala, several Christians and Muslims have learned and practiced Carnatic music over the past six decades and some are well known for their concerts and compositions.