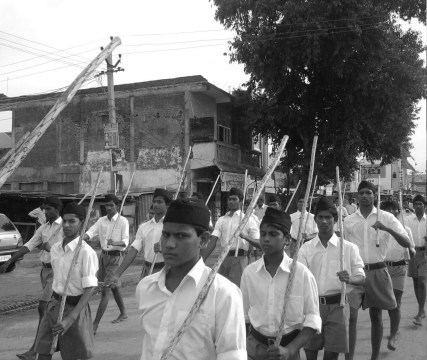 In their charge sheet filed in the court of the Rajsamand chief judicial magistrate on Friday, police stated Regar linked Afarajul’s death to love jihad, Article 370, Islamic terrorism so that his illicit relations with the woman would not be discovered. (HT: 15 Jan 2018). The half-burned body of Muslim youth was found by Rajsamand police in Rajasthan in the first week of December who was hacked and burned to death in an alleged “hate crime.” Such are the feudal crimes which had happened over the ages, claims Rajiv Maharishi (Hindustan Times, June 25). However, there is no denial of the fact that the perceptibility of such crimes have been in vogue much since the BJP government took charge in 2014. Indian authorities must ensure that there is no impunity for those criminals responsible for public lynching and other hate crimes against Muslims and other minorities in several states, said ‘Amnesty international India.’

The Oxford English dictionary defines a hate crime as ‘a crime, typically one involving violence that is motivated by prejudice by race, religion, sexual orientation, or other grounds.’ The organization for security and cooperation in Europe (OSCE) said in its 2009 guide for framing hate crime laws, that ‘the hate crimes are violent manifestations of intolerance against entire communities. They have a deep impact not only on the immediate victim but also the community with which the victim is identified, affecting the social cohesion and stability’. The new pattern of hate crimes, emerged in the recent past in India is multifold and mainly perpetrated against the Muslims and some lower caste Hindus in many states in the name of cow vigilantism, love jihad, Islamophobia (Islamic terrorism) and so on.

The recurring incidents of hate crime against a particular community, emboldened by the ruling party, has created an atmosphere of trepidation and animosity in which the life of Muslims and other vulnerable sections of society has become what Hobbes have depicted, “solitary, poor, nasty, brutish and short.” Under the democratic majoritarianism and growing Hindu militarism, the Muslims, in particular, are the sitting ducks vulnerable to attack from all corners. The government of India in the second week of last month placed the figures of the hate crimes in parliament. Minister of State for Home Affairs Hansraj Ahir replying to a question on the rise of some mob lynching in the country said that 444 cases under section 153 A of IPC were reported across the country in 2016 against 378 cases in 2015 and 323 in 2014. Alison Saldanha in her article published in ‘India spend’ and ‘The wire’ writes that the Cow related hate crimes peaked in 2017 leave alone the other kinds of hate crime, and eighty-six percent of those killed are only Muslims. She further wrote that around ninety-seven percent of all recorded incidents have occurred over the last three years since the BJP and Prime Minister Narendra Modi assumed power in May 2014.

The BJP government steered by right-wing RSS is responsible directly or indirectly in fostering the trend of hate crimes in India. The ruling party’s campaign for cow protection, Ghar Wapsi, the confirmation of a Hindu Rashtra, and the sui-distant love Jihad had not only emboldened the vigilante groups but the constant ignoring of these crimes by BJP leaders had further fostered them to operate under the tacit approval of state authorities, forcing the minority communities to live in constant fear in which not only justice is denied to them but the crime is at times justified, and the victims are forced to bear the brunt of state authorities.

The phenomenon of hate crimes thrives in the climate of impunity and concocted hate. An activist and former bureaucrat Harsh Mander in a report carried by Aljazeera said that there is a ‘growing climate of hate in India.’ He further went on to say that the political leadership in India has created an atmosphere which is permissive of acting out hate speeches and hate actions.The condition of the sorry state of affairs has worsened to such an extent that people here feel that even the cases of those reported crimes are not held to any accountability. The remaining part of this drama is played by those state authorities like police and judicial courts which play a very worrying role.

The growing phenomenon of hate crime hampers not only the development of constitutionally envisioned secular fabric but also the socio-political cooperation thus enhancement of discordance among diverse communities. The abysmal role of media has further relegated the already degraded situation. The attention in such crimes is often given to the fact that whether the victim is criminal or not thus giving enough space to the perpetrators to further their foul play. The unkempt law implementation authorities have further pushed society into the topsy-turvy condition where the minority groups find no place but to endure the majoritarian violence. The emotional insensitivity of judiciary and partisan treatment on the part of executive further deteriorated the scene. If not checked, the time would not be far, when India has to find its much cherished sui-distant democratic and secular ethos from the detritus of Hindu majoritarianism.