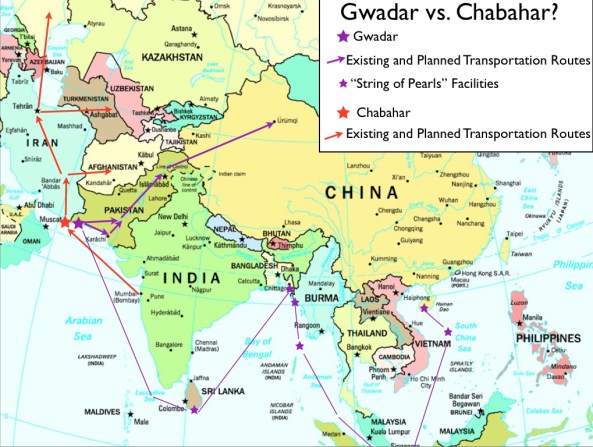 GeoCurrents1021    Map of the rivalry between Chabahar and Gwadar

The geo-strategic situation of South Asia region is changing rapidly, which can be attributed to the fact that the world powers are now redefining their roles in the region. Old loyalties are changing, and new alliances are being formed.

In the post-cold war era, the proximity of our region to the oil-rich heartland i.e. Central Asia as well as being part of the relatively recently derived concept of the “greater middle eastern region” have changed the region’s political dynamics. New alliances and pacts are coming up among nations at the regional as well as the global levels, befitting their economic, political and other interests. Pakistan’s signing of China Pakistan Economic Corridor (CPEC) with China is a milestone of economic cooperation between the two countries.

It is expected that this corridor would boost Pakistan’s ailing economy in the years to come. Gwadar, a strategic warm water deep sea port located on the Southwestern coast of Pakistan in the Baluchistan Province is the geographic center of gravity of the CPEC. The strategic location of Gwadar located at the junction of the Arabian Sea and the Gulf of Oman can be defined by its proximity to the Strait of Hormuz; a key maritime route to the oil-producing region. Gwadar has located about 700 km from Karachi and about 75 km from Iranian port Chahbahar.
It is connected to the Chinese city of Kashgar with a land distance of about 2,000 km through the Karakorum Highway in Pakistan. China is heavily dependent on Gulf oil; about 60% of the oil comes from the Gulf for which the ships have to traverse a distance of about 16000 km to her only commercial port, Chinghai, through the Indian and Pacific Oceans which takes about three months.

Gwadar, besides providing an opportunity to China to substantially reduce the time and distance to transport oil from the Persian Gulf to China by road, would also ensure its continuous flow through all weather conditions around the year. Additionally, it would also facilitate China to use the route another way round by exporting her goods to the Middle Eastern countries and the rest of the world as part of her “21st Century Silk Road Initiative”.

It is for this reason that China is providing about 80% of the cost of the port at Gwadar. It has also been reported in the media that Pakistan is providing a naval base to China which could lead to domination of the oil-rich Persian Gulf. US’s and Indian anguish about this project can thus be understood, along with any attempts/desires to sabotage this project by one means or the other.
Chahbahar is Iran’s Southernmost port city on the Gulf of Oman, which is the best access point to the Indian Ocean. It is part of the Iranian Sistan- Baluchistan Province, bordering Pakistani Baluchistan.

Iran is planning to use this port for transshipment to Afghanistan and Central Asia whereas it desires to keep the port of Bandar Abbas exclusive for trade with Europe and Russia as a major hub.
The Chabahar port is connected to Iran’s national highways network, and a railway track is also being laid. Iran, with the help of the Chabahar Agreement with India, is thus facilitating Indian access to the gas and oil resources of Iran and Central Asia.

India is helping Iran with an amount of $85 million to develop Chabahar port to get access to Central Asia through Milak (Iran)-Zaranj-Dilaram (Afghanistan) roads.
India is already in the process of developing Zaranj and Dilaram roads in Afghanistan, forming a ring road to connect Central Asia with the Middle East. India is also planning to connect to the oil resources of Turkmenistan by laying a pipeline through Afghanistan on to Iran and Gujrat through the Arabian Sea. This way India would be able to bypass Pakistan, which provides a much shorter route for the Asian Development Bank’s proposed project TAPI (Turkmenistan–Afghanistan- Pakistan-India) for transporting the Caspian Sea gas resources to India without any potential interruption from Pakistan.

While both India and Pakistan are vehemently trumpeting the Chabahar and Gwadar agreements and trying to undermine each other, the fact remains that Gwadar holds an edge over Chahbahar for its utility, geographic location to dominate the maritime waters, and its proximity with China due to the road link.
Chabahar is not located in the Indian Ocean Region where India’s other functional ports like; Mumbai, Kolkata, and Goa are located having the cover of the Indian Navy to ensure their maritime operations.

Unfortunately for India, the proximity of Gwadar to Chahbahar (only 72 km) with the former in a Pakistan Navy dominated area would always remain an irritant for her.
Additionally, if Gwadar Port is handed over to China by Pakistan, India’s ordeal would further increase.

Although Afghanistan is a partner in the Indian trade agreement of Chahbahar, the signatory is the Afghan government which does not exercise its command and control over a large portion of Afghanistan, especially the Afghan Mujahideen controlled Southern Afghanistan region.

The Mujahideen do not have any commonality of interest with India, whereas Pakistan has connections with major tribal groups in Afghanistan and has some influence on them.
Indian convoys could, therefore, be subjected to their attacks, creating a big question on the security of the Indian mercantile traffic passing through Afghanistan.

All of this would also be in the backdrop of Pakistan’s role to undermine the project when it enters Afghanistan as against the Indian clandestine operations to sabotage CPEC, of which the recent arrest of Indian Navy Commander Kulbshan Jadhav from Baluchistan, who was planted by Indian RAW for the purpose, is prime evidence.

Although the US has recently lifted its economic embargo on Iran which dates back to 2012, it continues to impose other sanctions over Iran’s alleged “human rights policies and support for terrorism.” These sanctions bar American citizens and companies from most forms of investment or trade with the country. Iran’s policies on Israel and its role in the Middle Eastern crisis are at complete odds with those of the West. Gwadar however, has no such problems. Pakistan has had a longstanding tried and tested relationship with China. The two countries have already worked jointly on economic, social, military and other projects.

Their economic, military, strategic goals are more or less aligned, which has led to a great understanding and trust between the peoples of two countries. Working together for the CPEC in the future should not pose a major challenge for them. Conversely, in the case of India and Iran, the element of trust and understanding are absent. Iran shares a border with Pakistan and has ancient religious and cultural ties with Pakistan. Iran is not expected to fall prey to the Modi’s traditional animosity for Pakistan as it would not disappoint more than 25% of the population of Pakistan who holds Iran in very high esteem, more or less as a religious center.

Thus Iran is supporting its neighbor Pakistan on Gwadar as against India which is not on good terms with her neighbor, China. The CPEC which is already well on the road to success is a natural alliance between two neighboring countries whereas the Chahbahar agreement is a very ambitious plan by India for which India has to face difficulties at all stages. It’s time for India to redefine her priorities in the region in the changing world of today. India can undoubtedly benefit from the shortest route to Central Asia through Pakistan provided she makes an effort to remove her irritants with Pakistan by resolving the Kashmir problem and abandoning the traditional animosity with Pakistan and live like good neighbors rather than investing in ambitious.