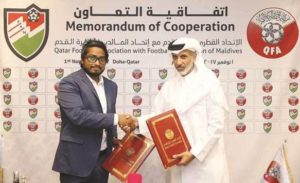 A target of massive Saudi investment, the Maldives severed diplomatic relations with Qatar hours after a Saudi-UAE-led alliance of largely financially dependent states declared in June an economic and diplomatic boycott of the Gulf state. That didn’t stop the Football Federation of Maldives from signing a cooperation agreement with its Qatari counterpart five months later, raising questions of the degree of support for the boycott even within the alliance.

The question is not merely hypothetical. It goes to both the heart of the failure of Saudi Arabia and the United Arab Emirates to garner significant international support for their effort to force Qatar to drop its independent foreign and defense policies, and the two states’ attempts to persuade world soccer body FIFA to deprive the Gulf country of its 2022 World Cup hosting rights. The international community by and large has called for a speedy negotiated end to the Gulf crisis.

The Maldives’ cutting of diplomatic ties with Qatar was in support of the alliance’s demands that Qatar halt support for militants, shutter the Al Jazeera television network, and reduce its ties to Iran. Qatar and the UAE in particular have, moreover, been locked into a covert war that precedes the boycott by several years in which the government in Abu Dhabi targeted Qatar’s hosting rights.

Dubai’s idiosyncratic police chief, Lt. Gen. Dhahi Khalfan, recently went as far as saying that the UAE and Saudi Arabia would lift their boycott if Qatar surrendered its hosting rights – a demand that was rejected by Qatar out of hand.

Recent German and Austrian media reported that a German campaign to stop extremism by persuading the European Union to take regulatory and punitive action against funders of extremism was funded by the UAE and Saudi Arabia. The campaign, which targets left and right-wing as well as Islamic militancy, identified Qatar and Turkey as the main funders of extremism in Europe. Supported by prominent Germans and Austrians, many with an immigrant background, the campaign has denied funding by Qatar’s detractors.

Businessmen with Qatari interests suspect, however, that the campaign will target Qatar’s hosting rights once it has garnered its targeted one million signatures on a petition demanding tougher EU policies on the funding of extremism. “This initiative is to align with the other German Qatar detractors by next year to agitate for a withdrawal of the hosting rights,” one businessman said.

All of which makes the Maldives soccer federation’s forging of closer ties to Qatar the more remarkable. The move followed not only the government’s breaking off of diplomatic relations with Qatar, but also Saudi efforts to squash criticism of controversial potential investments in the island republic as well as assertions that massive Saudi funding of Sunni Muslim ultra-conservative educational and cultural activities has put the Maldives’ traditional adherence to Sufism, a more mystical strand of Islam, on the defensive.

Journalists reporting on a potential $10 billion Saudi-funded real estate project that media reports asserted could involve the acquisition by the kingdom of Faafu, a collection of 19 low-lying islands 120 kilometres south of the Maldives capital of Male, were handed cash-filled envelopes during an event at the Saudi embassy in Mahe to counter the assertion. The project would allegedly involve building seaports, airports, high-end housing and resorts and the creation of special economic zones.

Maldives President Abdulla Yameen denied that the atoll would be sold, and the Saudi embassy said it had no intention “of investing in a megaproject or buying an island or atoll in the Maldives.” But the fact that Mr. Yameen pushed to change the Constitution in 2015 to allow the sale of property to foreign entities has fuelled rumours of potential sales to both Saudi Arabia and China.

Yameen Rashid, a 29-year-old popular blogger and prominent critic of creeping authoritarianism and Sunni Muslim ultra-conservatism in the Maldives was brutally stabbed and killed as he walked home from work earlier this year. His killers, believed to be Islamic militants, have yet to apprehended. Militants have also targeted liberals and other critics of the government.

The rise of ultra-conservatism has put on the defensive the Maldives’ long-standing live-and-let-live tolerance that helped make the atolls a high-end vacation destination. It has increasingly been replaced by more intolerant and puritan expressions of Islam. Public partying, mixed dancing and Western beach garb have become acceptable only within expensive tourist resorts.

Cultural change has been paralleled by a change in the Maldives’ political course. The Maldives has moved from being a small state that balances its relations with regional powers to an outpost of the kingdom’s geopolitical and religious worldview. As a result, the Maldives, in addition to subscribing to the boycott of Qatar, has joined a Saudi-led military alliance that nominally seeks to combat terrorism but has an anti-Iranian undertone, and severed ties to Iran, the kingdom’s arch rival.

The Maldives’ move into the Saudi orbit fortified the kingdom in its fierce struggle with Iran for regional hegemony. The atolls’ strategic position in the Indian Ocean, a straight three-hour shot from the Iranian coast, moreover, strengthened Saudi efforts to position itself as a more strategic ally of China in competition with Iran.

Analysts believe that both Saudi Arabia and China see the atolls as a potential host of military bases that would complement their separate outposts in Djibouti, an East African nation on a key energy export route at the mouth of the Red Sea.

They “want to have a base in the Maldives that would safeguard trade routes – their oil routes – to their new markets. To have strategic installations, infrastructure,” said exiled former Maldives president Mohamed Nasheed, who lost power in 2012 following protests over rising commodity prices and the nation’s poor economy.

The Saudis “have had a good run of propagating their world view to the people of the Maldives and they’ve done that for the last three decades. They’ve now, I think, come to the view that they have enough sympathy to get a foothold,” Mr. Nasheed said.

If soccer is anything to go by, Saudi Arabia’s grip on the Maldives may either be fraying or have been overstated by critics like Mr. Nasheed.

Speaking in Qatar at the signing of the cooperation agreement, Maldives soccer federation Bassam Adeel Jaleel insisted that the government, on which the football body is financially dependent, was “happy” with the forging of closer ties despite the boycott of the Gulf state.

Insisting that the Maldives could learn from Qatari preparations for the World Cup, Mr. Jaleel attempted to shield the government by noting that it adhered to the principle of a “separation of politics from football,” a fiction that governments and sports associations uphold because it gives them license to exploit to their advantage the incestuous relationship between the two. In the Maldives, that appears to amount to hedging the government’s bets as Qatar, five months into the Gulf crisis, has so far been able to resist Saudi and UAE pressure.