India’s economy surges, but inequality threatens democracy, culture and security with 80 percent of wealth in the hands of 10 percent.

Spectacular economic growth over the past three decades has made India a global economic powerhouse. Between 1990 and 2016, India’s economy grew at a compound rate of around 7 percent in current dollars. The Indian economy is now the third largest in the world by purchasing power parity after China and the United States.

Slow trickle: India’s wealth is concentrated with 80 percent held by 10 percent of the population. The first decile controls a negative percentage due to debt amounting to US$21 billion. (Source: Oxfam Briefing Paper: An Economy for the 99%)

Slow trickle: India’s wealth is concentrated with 80 percent held by 10 percent of the population. The first decile controls a negative percentage due to debt amounting to US$21 billion. (Source: Oxfam Briefing Paper: An Economy for the 99%) 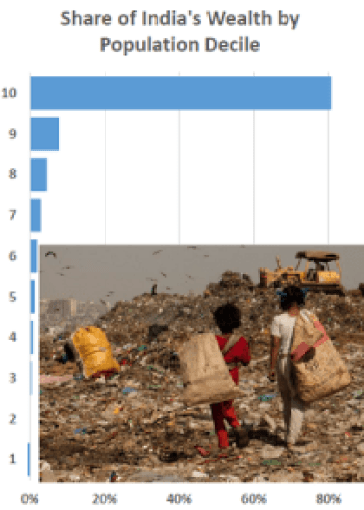 The surging economic growth has improved living conditions of its citizens, but these improvements were not uniformly distributed among India’s diverse population.  Despite being among the richest countries in the world, India has attracted negative attention in recent years as the second most unequal country in the world, after Russia. According to the Credit Suisse Research Institute, the top 1 percent of India’s population owns nearly 60 percent of its wealth, trailing Russia, where the top 1 percent owns 74 percent.  Like the Gini index which measures income/wealth distribution in society, the Credit Suisse Index estimates concentration of wealth among top wealth and income holders. The factors affecting wealth/income concentration include economic growth rate, demographic trends, savings rates, globalization, inheritance and government policies.

Since 1990, the per capita gross domestic product has increased almost six times – from US$1,130 to US$6,572. Life expectancy, infant and maternal mortality, sanitation, mean years of schooling and female literacy registered significant improvements for the population of more than 1.3 billion. In all these areas, improvements were better than in its two large South Asian neighbors, Pakistan and Bangladesh.

In India, the upper classes were the main beneficiary of the nation’s surging economic development, and poverty rates are also significantly lower among the upper caste Hindus rather than the Hindu other backward classes, the scheduled castes and scheduled tribes, and Muslims. One third of Muslim and Hindu scheduled castes and tribes are in poverty compared to 10 percent of the upper castes Hindu. Altogether 28 percent, or around 360 million Indians, are living in conditions of severe poverty.

While economic growth is absolutely crucial in raising living standards of India’s vast population, the distributional effects of economic growth, as measured by income distribution, play a significant role in determining the long-term development trends and socioeconomic well-being of the citizens. India is one the richest countries in the world, and yet, the average Indian is relatively poor as a result of highly-skewed income distribution.

According to the latest data from Credit Suisse and Oxfam, the richest 10 percent of Indians own 80 percent of the country’s wealth. At the other end, the poorer half jostles for a mere 4.1 percent of national wealth. Even more strikingly, during the period of India’s rapid economic growth, the rich have been the greatest beneficiaries. Between 2000 and 2016, the share of India’s richest 1 percent increased from 36.8 percent to over 50 percent. The rising income inequality has developmental implications – leading to slower poverty reduction and undermining sustainability of economic growth.

Increasing wealth concentration is also reflected in income growth. Between 1988 and 2011, the incomes of the poorest 10 percent of Indians rose by US$29, or around ₹2,000, at an increase of 1 percent per year. In the same period, the income of the richest 10 percent increased by almost ₹40,000 (US$ 615), at the rate of 25 percent per year. The reasons for this inequality include crony capitalism and corporations that exploit employees at lower rungs to maximize salaries and dividends for executives and shareholders. As the French economist Thomas Piketty shows in his seminal book, Capital in the Twenty-First Century, the surest way to grow wealth is to possess it.

The rapid rise of income inequality is reflected in changes in the more traditional Gini Index. Between 1990 and 2013, the increase in the Gini coefficient was one of the highest not only in Asia, but also in the world. Interestingly, in the period when India’s Gini coefficient was rising, it was declining in other highly unequal regions such as Latin America and Africa. 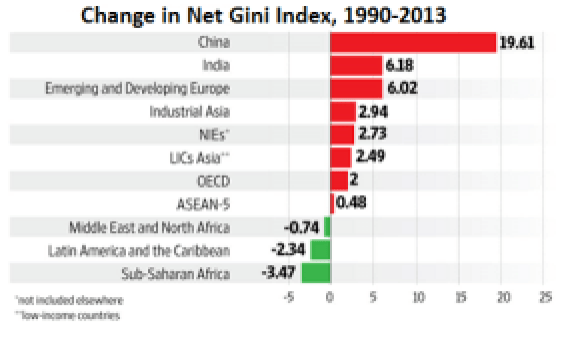 Growing problem:  Inequality is increasing in India and elsewhere around the globe (Source: Manas Chakravarty and IMF)

Rising income inequality has developmental implications. The super-rich can avoid taxes by using innovative schemes to shelter their wealth and manipulate the political system without repercussions. This impedes the government’s ability to raise revenues that contribute to slower poverty reduction and also adversely impacts social spending to reduce social inequalities of health, education and employment. India already fairs poorly in this area. Currently, 3 percent of GDP goes towards education and only 1.3 per cent towards health. By comparison in China percentage of GDP allocated to education and health is 4.3 and 5.4, respectively. 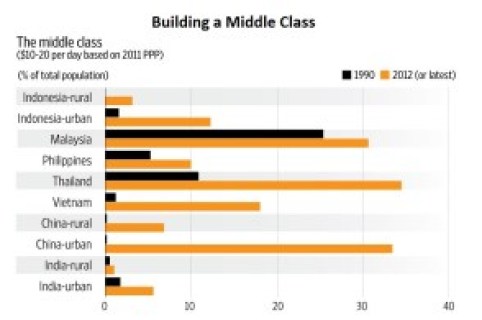 Economic inequality can adversely exacerbate a range of social problems, including intergroup relations and conflict, social cohesion and violent crime. Inequality hurts not only the poor but everyone with increased crime and increased workplace accidents. India ranks 125 out of 159 countries in the Gender Inequality Index. In a range of indictors including mean years of schooling, gross national income per capital and labor force participation rates, Indian women lag significantly behind Indian men. Cumulative effects of entrenched inequality will worsen their deprivations. Inequality is also affecting India’s urban landscape. Recent studies show that class, ethnicity and caste inequalities represent the growing axis of residential segregation in contemporary urban India.

*Riaz Hassan is visiting research professor at the Institute of South Asian Studies at the National University of Singapore and director of the International Centre for Muslim and Non-Muslim Understanding at the University of South Australia and Emeritus Professor of Sociology at Flinders University.