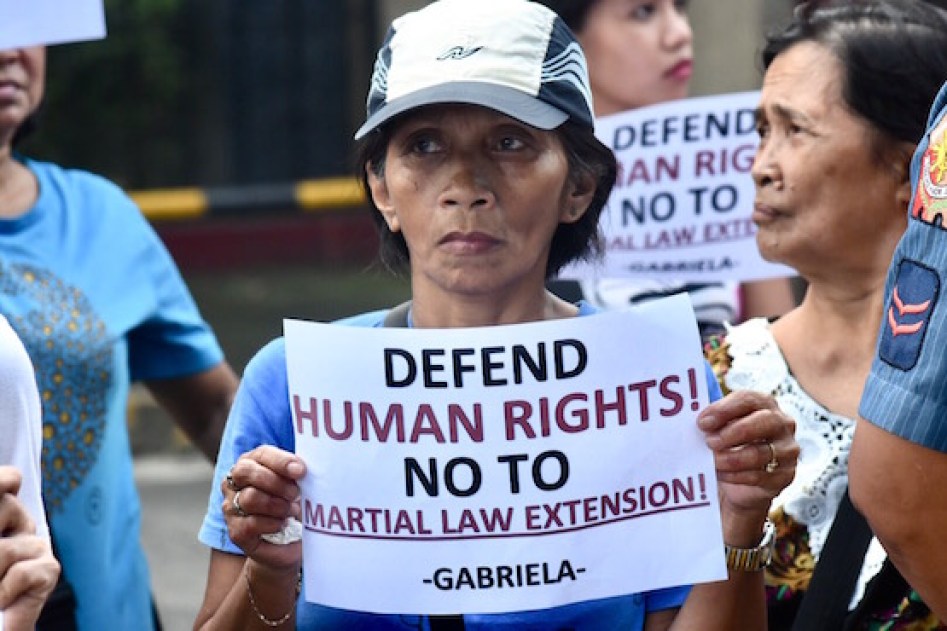 A resident of an urban poor community in Manila joins a protest rally to demand respect for human rights during the observance of International Human Rights Day in December. (Photo by Angie de Silva)

The human rights situation in the Asia-Pacific region in the past year was mostly characterized by government failures, according to Amnesty International’s report released this week.

Amid “a shrinking space for civil society” was, however, an “inspiring and growing movement of human rights defenders and activists,” said the report.

On top of the list of countries where human rights defenders, lawyers, and journalists became the target of state repression were China, Cambodia, Thailand, Bangladesh, and Pakistan.

The report also noted widespread impunity in Myanmar and Afghanistan where the global refugee crisis continued to worsen.

The London-based human rights group noted the “massive violations” of human rights in the Philippines, where thousands were reported killed in the government’s war against drugs.

In other parts of the region, the growing awareness for the respect and the protection of human rights, especially among young people, “delivered some progress and hope.”

Advances in policing and a court ruling on corporate accountability were seen as positive steps in South Korea.

Marriage equality legislation in Australia and Taiwan and respect for the right to privacy in India were also noted.

The report said human rights defenders were specifically targeted and persecuted in China where a “notable shrinking of space for civil society” was apparent.

The report took note how freedom of expression in Hong Kong came under attack, citing the filing of charges against pro-democracy activists in the autonomous region.

“The repeated use of vague charges against prominent pro-democracy movement figures appeared to be an orchestrated and retaliatory campaign by the authorities,” read the report.

The report also observed unprecedented crackdown on dissent in China, citing what it described as a “ruthless campaign of arbitrary arrests, detention, imprisonment and torture” of activists.

The situation in the mainland also continued to deteriorate, according to China researcher Patrick Poon. “[We] don’t see any improvement in the human rights situation in the short term,” he said.

He said unless the Chinese government “understand clearly that they … have a duty to abide by human rights convenants” there will be no improvement in the situation in China.

In Japan, the report said human rights protection was diluted after an “overly broad law targeting terrorism and other serious crimes” was passed.

Across South Asia, law and order, national security, and religion have been invoked in attacks against religious minorities.

Impunity was widespread in the past year and freedom of expression was under attack across the region, according to the report.

“National interest” has been used as an excuse to silence people, journalists, and human rights defenders who expressed their beliefs.

The report noted that killings, abductions, and other abuses were committed by armed groups in Afghanistan, Bangladesh, India, and Pakistan, resulting in civilian casualties, particularly among religious minorities.

Dissenting voices and members of religious minorities across the region were increasingly vulnerable to attacks from mobs, said the report.

In India, several cases of lynching of Muslims were reported, sparking outrage against the wave of rising Islamophobia under the Hindu nationalist government.

In Bangladesh, attacks against religious minorities were met with near-indifference by the government.

In Sri Lanka, the rising Buddhist nationalist sentiment resulted in attacks against Christians and Muslims.

One of the most covered issues in the region in the past year was the denial of rights to refugees and migrants.

The number of internally displaced people in Afghanistan rose to more than two million, with about 2.6 million Afghan refugees living outside the country.

Killings and persecutions in Southeast Asia

In Southeast Asia, killings, torture, and enforced disappearances continued amid what has been described in the report as a “shrinking civic space.”

One of the most glaring human rights issue in the past year was the campaign of violence by Myanmar’s security forces against the Rohingya people in northern Rakhine State.

The Amnesty International report said it “amounted to crimes against humanity” that created a human rights and humanitarian crisis in the country and in neighboring Bangladesh.

Lawlessness and violence were also noted to have increased further in the Philippines.

The report said President Rodrigo Duterte’s contempt for human rights in his “war on drugs” was characterized by mass killings, mostly of poor people, including children.

The extension of the declaration of martial law in the southern region of Mindanao led to concerns that military rule could be used to justify further human rights abuses.

In Indonesia, police killings of suspected drug dealers also rose sharply in the past year.

The report, meanwhile, observed what it described as Australia’s continued “lip service to human rights while subjecting asylum-seekers and refugees to cruel, inhuman and degrading treatment.”

In general, the report noted that governments in Southeast Asia and the Pacific failed to uphold the economic, social and cultural rights of its people.