Gorkhas Unrest in India and Their Nepal Connections 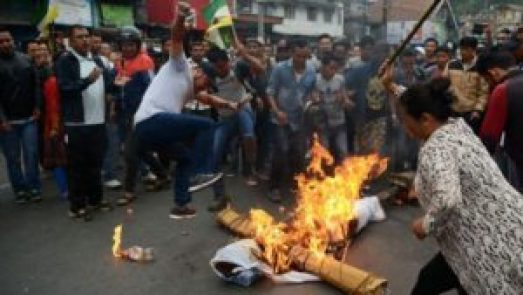 The Gorkha Janmukti Morcha is demanding a separate state in Darjeeling

The Indian Gorkhas, Nepali speaking great warriors, have once again started their unrest and demonstrations demanding a separate state of Gorkhaland based on their language, ethnicity, and history.

In the 1980s, Subhash Ghishing raised the demand for the creation of a state called Gorkhaland within India to be carved out of the hills of Darjeeling and areas of Dooars and Siliguri Terai contiguous to Darjeeling. The demand took a violent turn, which led to the death of over 1,200 people. This movement culminated in the formation of  Darjeeling Gorkha Hill Council (DGHC) in 1988. The DGHC administered the Darjeeling hills for 23 years with some degree of autonomy.

As of June 2017, there is an ongoing agitation for a separate state in Darjeeling and surrounded areas. This time the agitation started as a protest against the imposition of  Bengali language in the hills of West Bengal where  Nepali is the official language.

If we see the origin of Gorkha tribe and Gorkha army,  the Gurkha, also spelled as Gorkha, are people from Nepal who take their name from the 8th century Hindu warrior-saint Guru Gorakhnath and from the hill town of Gorkha, from which Nepal had expanded.

Gurkhas are best known for their history of bravery and strength in the Indian Army’s Gorkha regiments and the British Army’s Brigade of Gurkhas.

Former Chief of Staff of the Indian Army, Field Marshal Sam Manekshaw once famously said about Gurkhas: If a man says he is not afraid of dying, he is either lying or he is a Gurkha.

They are one of the most feared soldiers in the world and have won the respects of even their enemies.

The Gurkha war cry is “Jai Mahakali, Ayo Gorkhali” which translates to “Glory be to the Goddess of War, here come the Gorkhas!”

The word Gorkha is derived from the Prakrit words “go rakkha” (Sanskrit gau-raksa, literally “cow-protector”). This was used by Guru Gorakhnath, the spiritual leader of the Gorkhas, the name given to his disciples.

During World War I (1914–18), more than 200,000 Gurkhas served in the British Army, suffering approximately 20,000 casualties, and receiving almost 2,000 gallantry awards. The number of Gurkha battalions was increased to 33, and Gurkha units were placed at the disposal of the British high command by the Nepalese government for service on all fronts.

During World War II (1939–45), there were 10 Gurkha regiments, with two battalions each making a total of 20 pre-war battalions. In 1940, the Nepalese government offered to increase recruitment to increase the total number of Gurkha battalions in British service to 35.

From the end of the Indian Rebellion of 1857 until the start of the First World War the Gurkha Regiments saw active service in Burma, Afghanistan, the North-East and the NorthWest Frontiers of India, Malta (the Russo-Turkish War, 1877– 78), Cyprus, Malaya, China (the Boxer Rebellion of 1900) and Tibet (Younghusband’s Expedition of 1905).

Although their deployment is still governed by the 1947 Tripartite Agreement, in the post-1947 conﬂicts India has fought in, Gurkhas have served in almost all of them, including the wars with Pakistan in 1947, 1965 and 1971 and also against China in 1962. They have also been used in peacekeeping operations around the world. An example of this came in 1999 when the 5th/8th Gurkha Riﬂes were sent as part of the Indian Army UN contingent of the United Nations Mission in Sierra Leone (UNAMSIL) to secure the diamond ﬁelds against the Revolutionary United Front. They have also served in Sri Lanka conducting operations against the Tamil Tigers.

There have been 26 Victoria Crosses awarded to members of the Gurkha regiments. The ﬁrst was awarded in 1858 and the last in 1965. Thirteen of the recipients have been British ofﬁcers serving with Gurkha regiments, although since 1915 the majorities have been received by Gurkhas serving in the ranks as private soldiers or as NCOs. Also, since Indian independence in 1947, Gurkhas serving in the Indian Army have also been awarded three Param Vir Chakras.

There is two types of Nepali speaking (Gorkhas) population in India – one is permanent citizens of India whose numbers are between 10 to 12 million, and another is a citizen of Nepal, non-Indians who serves in Gorkha battalions as well as in temporary household jobs in India.

Out of 50000 Gorkha soldiers in India, Nepalese Gorkha makes up almost 70% of the Gorkha Regiment, while “Indian domicile Gorkhas” from places like Dehradun, Darjeeling, and Dharamshala constitute the rest.

There are roughly another 20,000 Gorkhas in Indian paramilitary and police forces like Assam Rifles.

Although the number of serving Nepalese Gorkhas is quite small to operationally matter for the 1.13-million Indian Army but so far Indian border security is concerned, they play the lead role in Indian Army.
Historically, the present Indian Gorkhas territories, Darjeeling, and the surroundings were part of Nepal. The current border between Nepal and India was set after the former’s defeat at the hands of British in 1814 which led to the  Treaty of Sugauli with Nepal losing the territories of  Darjeeling to the East and Kumaon and Garhwal up to Sutlez river in the West.

Before the 1814 war, the movement of people of both countries was allowed, but they were not authorized to purchase land and settle.

The British Government kept the Nepal-India border open primarily for two purposes. The first was to maintain unrestricted migration of the Nepalese hill people to India and to procure them for recruitment in the Indian army.

The second crucial factor for maintaining open border by the British was to have easy and free access to British and Indian manufactured goods into Nepal as well as to Tibet wherein Nepal was the only easy and accessible route from India to the discovery of Chumbi Valley route from Sikkim. Moreover, the British wanted to have a secure and easy supply of raw materials from Nepal into India such as timber and forest produce, herbs and medicinal plants, hides and skins, etc.

Most of Nepali speaking residents of eastern India who were retired and released from war duty after the war, instead of coming back to Nepal, stayed in India, where they could get employment in police and para-military services, security services in factories, offices as well as domestic jobs in Indian cities where they were in high demand for their honesty, loyalty, and hard work.

In the 1950s, the  Rana rulers of Nepal welcomed close relations with India, fearing an overthrow of their(Rana) autocratic regime.  Rana rule in Nepal, however, collapsed within three months of signing the 1950 Indo-Nepal Treaty of Peace and Friendship, which formally opened free movement of people between two countries. India’s influence over Nepal increased throughout the 1950s.

“The Nepali nationals coming to India through the open border under this treaty unintentionally diluted the Indian identity and nationality of Gorkhas in India because of similar cultures, ethnicities, and language. Indian policy makers, governance actors and the people generally did not maintain a distinction between the two groups—they put both the Nepali nationals and Indian Gorkhas in the same basket of “people from Nepal.” The Indian Gorkha’s experience of discrimination has become all the more bitter and blatant because they still do not have their state, in contrast to the Bengalis, Nagas, Assamese, Mizos, Tamils, Kannadigas, Marathis, Gujaratis and many others who do have their states created on the basis of language, ethnicity, and history.”- Mahendra P.Lama, a senior professor at Jawaharlal Nehru University, is also a member of the Eminent Persons Group from India wrote in an article published in the Kathmandu post on 2017 /7/12.

Moreover he wrote – “The 10-12 million Indian Gorkhas living in various parts of India have been demanding the abrogation of this treaty or special provisions to protect them. They even burnt the 1950 Peace and Friendship Treaty during the violent Gorkhaland movement in July 1987.  ”

“Indian Prime Minister Narendra Modi’s willingness to review and revise this treaty as expressed during his visit to Nepal in August 2014 has once again provided an opportunity for the Indian Gorkhas to reassert and reposition their identity vis-à-vis the population from Nepal. ”

For recruitment of Nepalese people in the foreign army, discussions have begun in Nepal whether Nepal should allow its citizen to be recruited in the British and Indian armies. Individuals who support the motion say that the Gurkhas have been an integral part of the world warrior history, which is a subject of great dignity and pride for the Nepali people. People who are against the motion say that recruitment in armies of other countries should be stopped as ﬁghting for the sake of other nations has no positive implications for Nepal.

For open border of Nepal with India, Nepalese people are also not happy. They also want its closure or to regulate it properly on controlled way. Now, there is room for corrections with the   Eminent Persons Group (EPG) of Nepal and India, created to look into Nepal-India ties and to review all bilateral treaties between the two countries in particular on every facet of the 1950 treaty.