Some BJP leaders believe in giving mobs a free run, although their view in the Supreme Court is that there is no absolute personal freedom

Not all deras are dens of debauchery 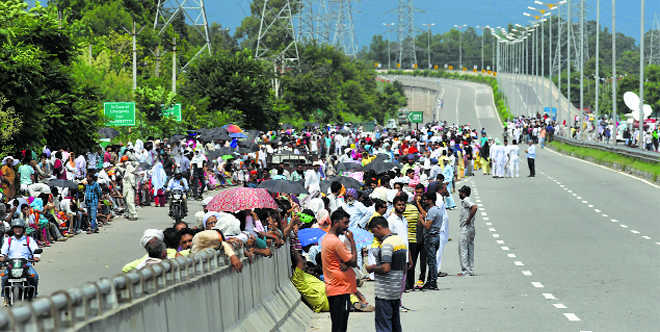 The ‘Mighty Party’ that rules the land under ‘Dear Leader’ has in the past two weeks lost control over both humans and cows. Most pressing is the latest news that Haryana is burning because in an utterly disgraceful display of supplicating before a godman (who’s a convicted rapist and perhaps a murderer) the BJP regime in that state allowed a mob to build up that very expectedly ran riot and many people lost their lives.

Even as blood was being spilt and fires engulfed the state, I ran into one of Haryana ministers in a TV studio who asked innocently: what could we do, we can’t stop movement of people? He almost sounded aggrieved over being asked questions.

Turns out that some BJP members believe in absolute freedom in public spaces (after all, there’s an impressive history of giving mobs a free run) although their view in the Supreme Court on the Right to Privacy matter was that there is no absolute personal freedom. Their argument implied that private spaces can be encroached upon in the greater public good (which possibly they and their mobs could determine).

Quite a contradiction there so let me illustrate with an example of the Orwellian world which is actually a reality for many Indians: before the Supreme Court reinforced privacy, your neighbour could check up on what you eat if he did not like you and say there are suspicions that you are consuming cow beef but the mob that invades your home and possibly kills or thrashes you could get away with it!

Problem is that the BJP’s not doing a good job on the cow front too: Some distance from Haryana, in a state called Chhattisgarh full of adivasis who keep dying, a BJP leader allowed over 200 cows to die in a ‘gaushala’ that he claimed was protecting old cows. I mean he just let them starve to death in a cruel and terrible way, (something that has happened to tribal people who are thrown off their lands but since many of them turn anti-nationals it is not worthy of our attention).

But dying cows is outrageous and no one was lynched for this (not that I support lynching but sometimes one gets so angry when it’s a matter of faith!).

Then after neglecting cows and not lynching its members who do so, the BJP had an amazing up and down fortnight when it suddenly became the protector of Muslim women. It really was an incredible few days in our Republic. Men and women with varying types of head-gear held forth on this talaq and that talaq and Quran vs Sharia and so forth while BJP spokies sat on TV channels with a beatific smile being uncharacteristically gracious and saying nice things about their brave and courageous Muslim sisters. If they had two good days it’s all because of ‘Great Leader’ and stupid Muslim men.

The love for Muslim women was note-worthy when we know that on ideological grounds the party of the Gods does not like them, so maybe they were just plotting to conquer the minorities by doing love jehad in reverse. In case that turns out to be the plan, do remember you first read it here. That would be quite a feat. Render all the Muslim males ineffective (including long dead Mughal emperors) and just steal all the women from under the nose of stupid and bigoted clerics who would like them to be invisible anyway.

Now that Mughal Sarai junction has become Deendayal Upadhyaya station we know that even long buried dynasties are a threat to nationalism if the kings happened to be Muslims. But women are an altogether different matter and, henceforth, the BJP would like to be known as a liberating force for both women and cows (never mind the mishap in Chhattisgarh). They are firmly committed to chattel.

Such a great and enlightened age will dawn upon us only after the fires have been put out in Haryana and the chief minister and entire cabinet sacked. It’s entirely possible that ‘Dear Leader’ is working on exactly such a plan as he does not like his image to be spoilt by incompetent lesser beings.

It is said that ‘Dear Leader’ has not been impressed with children dying in Gorakhpur either. The fact that it’s the constituency of the other self-styled hero, Adityanath Yogi, has not been missed and only reinforces how many heads and shoulders above the others does ‘Dear Leader’ soar.

So much so that the lesser mortals in the BJP did headstands when the government lost in the historic Right to Privacy judgment that restored the moral moorings of our Republic. They immediately offered convoluted arguments to say that actually they are the real defenders of all freedoms. Thank you Modiji, for all the good things in our lives. There I said it before the ‘bhakts’ say so. Now just douse the fires.