Geopolitics will decide fate of the Rohingya 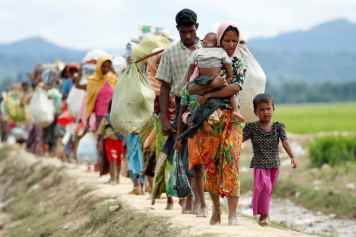 The scale and nature of the violence unleashed by the Myanmar authorities against the Rohingya has prompted a top United Nations official to describe the operation as a “textbook example of ethnic cleansing”. Human Rights Watch has concurred, and Amnesty International has called for an investigation into these criminal acts.

The violence, underpinned by the clear intent to eradicate the distinct identity of an ethnic group, meets the criteria under the UN’s  Convention on the Prevention and Punishment of the Crime of Genocide. The issue is no longer internal but international. It demands direct and immediate intervention by the international community.

Realpolitik, however, teaches us that no such direct action will ensue. Instead, it is geopolitics that will decide how the Rohingya will live and die.

A good example of the potency of realpolitik in shaping the lives of people caught up in internal conflicts is that of Sri Lanka’s Tamils, who were similarly subjected to state-orchestrated pogroms. These programs conducted sporadically over several decades culminated in the worst of all in July 1983, causing 3,000 deaths in just two weeks.

International outcries followed. The International Commission of Jurists declared the violence to be “a series of deliberate acts, executed in accordance with a concerted plan, conceived and organized well in advance” and concluded that these actions “amounted to acts of genocide”. Canada and Australia opened their doors on humanitarian grounds to Tamils fleeing the violence.

At the end of the day, however, it was geopolitics that determined how this particular conflict was played out and indeed continues to play out, with the US, China and India vying to court Colombo.

Interestingly, in both the Sri Lanka and Myanmar cases “political Buddhism” played a pivotal role in the violence unleashed against the Tamils and the Rohingya. And in both cases, the violence escalated after the persecuted decided to strike back.

Violence against the Tamils intensified when the Liberation Tigers of Tamil Eelam (LTTE) ambushed and killed 13 soldiers in July 1983, and against the Rohingya when the Arakan Rohingya Salvation Army (ARSA) attacked 30 police posts in one night, killing several policemen.

The more telling comparison will be when the various international actors begin to respond in pursuit of their own vested interests.

The initial responses by India, China and the US suggest that the posturing has begun in earnest. India, mindful of developing access to  Southeast Asian markets and countering Chinese dominance in Myanmar, has taken a decidedly pro-government stance by strongly condemning the “terrorist attacks on Myanmar security forces”. China, which competes with the US for influence in Myanmar, has endorsed Myanmar’s offensive against Rohingya Muslim insurgents.

The US, while expressing concern about the violence, has stopped short of criticizing Myanmar’s government or its de facto leader, Nobel laureate Aung San Suu Kyi. Her “Western credentials” explain Washington’s disinclination to condemn her. She could prove to be a useful ally in countering China’s influence. Then there is the “Islamic threat” that looms large as experts warn of Islamic State (ISIS) recruiting fighters from among the Rohingya.

Regional and global powers will not want to distance themselves from Myanmar, however repugnant its treatment of the Rohingya. Instead, attempts will be made to demonize the Rohingya to justify the actions that geopolitics demand. The recent well-publicized news of Rohingya Muslims allegedly turning on the Hindu minority in Rakhine state, based on photos released by the Myanmar government, is perhaps the beginning of this process.

It is only a matter of time for geopolitics to outweigh any humanitarian concerns.