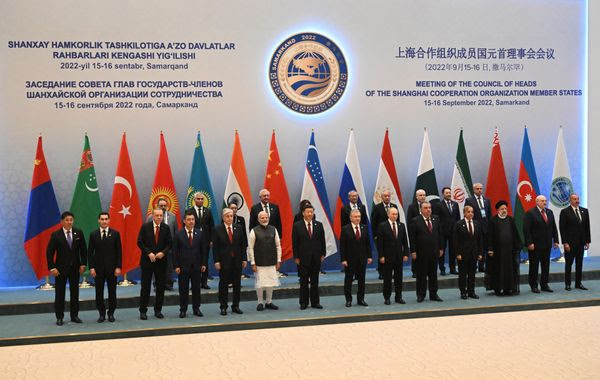 As the Shanghai Cooperation Organization met last week in Uzbekistan, observers braced for impact. Would China’s Xi Jinping meet India’s Narendra Modi? (No). Would Modi meet Pakistan’s PM Shehbaz Sharif? (Also, no). Would anybody put Vladimir Putin in his place? (Modi sort of did). Would China get real with Russia over Ukraine? (Not really, though Putin did emerge as the obvious junior partner to Xi in the huddle). Amid the fanfare and the photo-ops, these developments posed larger questions: Is the SCO relevant? Does it have ‘bloc potential?’ Is it a threat to the West?

The Big Brother club? Given the exception of India, the SCO is often thought of as a talking shop of autocratic regimes. But between its eight members – China, India, Kazakhstan, Kyrgyzstan, Russia, Pakistan, Tajikistan, and Uzbekistan – it represents 3.1 billion people, spans most of Eurasia, and boasts a quarter of the world’s GDP, thanks to some of the world’s biggest energy reserves. Moreover, it’s still getting bigger. Iran just joined as a full member; Belarus is hoping to be next; and Armenia, Azerbaijan, Cambodia, Nepal, Maldives, Myanmar, Sri Lanka, and Turkey have also taken the first step towards membership by signing on as dialogue partners. The SCO is also expanding to the Middle East, as Bahrain, Egypt, Kuwait, Qatar as well as Saudi Arabia have become partners.

What does the SCO really do?

“In terms of substantive stuff, the SCO doesn’t really do much,” says Nicole Grajewski of Harvard’s Belfer Center. “It is a way for a lot of the elites in the region to justify some of their policies that might be inherently autocratic.” The SCO was founded in 2001 to stabilize China and Russia’s security and border ties with the Central Asian ‘Stans and was originally driven by China’s war against what Beijing has described as the “three evils:” terrorism, separatism, and extremism. But now, Grajewski says, it creates a focus for members to justify their harsh actions against “color revolutions” as well as defend policies for regions like Xinjiang. This makes the SCO a particularly important driver for Beijing, for it is China’s first foray into making its own multilateral organization.

But a bloc it is not. Eurasia Group’s Zach Witlin says “several of the founding members are already part of security and trade blocs … [like] the Collective Security Treaty Organization (CSTO), a Russia-dominated security bloc of six ex-Soviet states that includes a commitment to collective defense.” But these existing blocs are not as effective as they might sound on paper because there is not a strong enough overlap of member states’ interests, he says. Just last week, CSTO member states clashed in two separate military conflicts (Armenia vs Azerbaijan and Kyrgyzstan vs Tajikistan) showing how members don’t follow the letter or spirit of the bloc. Witlin thinks that even if the SCO were to replicate the region’s bloc template, there would be too many differences between members. The Indians, for instance, won’t deal with the Chinese or the Pakistanis, and vice versa, at least as far as we-are-in-the-same-security-bloc rules of engagement go.

Regardless, Beijing is taking the lead in pushing for economic union: Xi Jinping has previously said that he wants to “expand shares of local currency settlement, better develop the system for cross-border payment” and establish an SCO development bank. Xi also says that he wants to set up an “SCO Big Data Cooperation Center” as soon as next year and help members with space tech. These are big plans. But they don’t portray the bigger point.

“They talk a lot,” says Grajewski, pointing to the lengthy statements about economic coordination, which is countered naturally by already operational frameworks like China’s BRI and Russia’s Eurasian Economic Union – making both Beijing and Moscow skeptical of turning the organization into something that’s more economically focused. The rhetoric, Grajewski adds, is “performative because Russia doesn’t have the means to really pursue economic integration and the regional states are averse to devolving any type of sovereignty” in pursuit of more integration.

But the SCO is driving some issues: Counterterrorism is the leading one. Afghanistan, the never-ending South and Central Asian security cesspit, kept popping up in statements this year, but the organization has graduated beyond paying lip service to action with the Regional Anti-Terrorism Structure (RATS). Established in 2002, it puts members’ leaders and troops in the same room and on the same training ground to counter regional separatism and extremism.

“It has to be remembered that the SCO has pulled off the near-impossible through the RATS mechanism,” said Suhasini Haidar, the diplomatic editor of The Hindu, who was in Uzbekistan to cover the recent summit. She points out a major achievement: the Indians and Pakistanis last year trained together in RATS drills in Pakistan (and the Pakistanis have just confirmed that they will be training with Indian troops again next month). These are big firsts, considering the violent history between these two nuclear-armed rivals – but the exercises, premised on countering terrorism emanating from Afghanistan, could lead to larger breakthroughs between member states.

What’s the view from the US? For Washington, the SCO is also a collective grouping of many blacklisters and almost-blacklisters. Russia and Iran are two members that top the list of America’s most sanctioned regimes. China, which co-founded the organization and houses its main secretariat, isn’t there yet but is officially the “pacing challenge” for the US.

“The West needs to see the SCO as an alternative to its own narrative on almost every issue,” says Haidar. Emphasizing that the SCO doesn’t pretend to be a coalition of democracies, she says that the group presents an alternative spin to the Western perspective on everything: from Putin’s war in Ukraine, to Taiwan, to sanctions on Iran, but with a theme of multilateralism, not unilateralism.

“Yes, they are talk shops,” she says about the group, yet insists that the leadership, though coming from very different places and perspectives, is focused on connecting. “But they are speaking with their feet by showing up to these conferences, which means the West should see this as an important alternative to its narrative.”