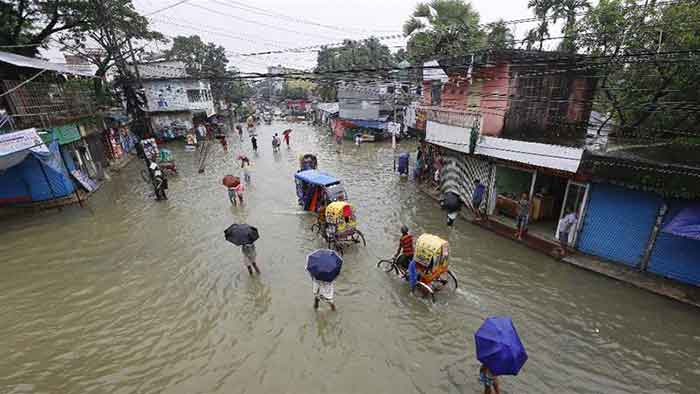 From some of the heaviest rains in a decade that has created monsoon flood, a third of Bangladesh is already underwater, and at least 1.5 million people are already affected, marooned or have left their homes for higher ground along with their cattle and other belongings with villages and roads flooded.

Almost four million people have been hit by this monsoon floods in South Asia.

The monsoon, usually falls from June to September, is crucial to the economy of the south-Asian sub-continent. But it also causes widespread death and destruction across the region each year.

“This is going to be the worst flood in a decade,” Bangladesh’s Flood Forecasting and Warning Centre chief Arifuzzaman Bhuiyan told AFP.

The heavy rains have swollen two main Himalayan river systems – the Brahmaputra and the Ganges – that flow through India and Bangladesh.

Bhuiyan said about a third of flood-prone Bangladesh – a delta-nation crisscrossed by hundreds of rivers – was underwater, and at least 1.5 million people were affected, with village homes and roads flooded.

Most villagers were trying to stay near their flood-damaged homes, but some 15,000 had fled severely affected areas, officials said.

With a 10-day forecast pointing to rising waters, Bhuiyan said if more rivers burst their banks some 40 percent of the nation could be flooded “in a worst-case scenario”.

Adjoining Bangladesh, in the Indian state of Assam, northeast India, more than 3.3 million people in 28 districts are affected with the floods. At least 85 people have died so far with flood-related incidents while tens of thousands of mostly rural residents evacuated to relief camps, officials said. Over 3,300 villages in Assam remain inundated in the state.

At least 180 embankments in the state have breached, which are part of close to 5,000-km-long embankment network along the Brahmaputra.

Emergency services personnel wore head-to-toe bright-orange suits to protect themselves from the floods and coronavirus, which has infected almost 17,000 people in Assam, as they used boats to reach stranded villagers.

“We have two challenges here, one is COVID-19 and another is (the) flood,” the head of a local rescue team, Abhijeet Kumar Verma, told AFP.

Vast tracts were still underwater with 28 of the state’s 33 districts badly affected.

The Brahmaputra River, which flows through Tibet, India and Bangladesh, burst its banks in Assam late last month, inundating large swathes of the state and triggering mudslides.

Thousands of people were taking shelter on Tuesday on a raised river embankment after being displaced from their submerged homes in central Assam’s Morigaon district.

“Our villages and all nearby villages have been under chest-deep water for about a week now,” said Nilima Khatun, who was clutching her two-year-old child.

“We are passing days in misery with no relief coming our way from the government.”

The floods also inundated most of Kaziranga National Park, home to rare one-horned rhinos, authorities said. Tigers and other animals were forced to seek shelter in villages, which were still not inundated.

In the Pabitora wildlife sanctuary, 21 miles east of the state capital, Gauhati, an entire one-horned rhino population of over a hundred were taking shelter in artificially built highlands.

“The entire park is submerged with the rhinos moving to the highlands for shelter,” park ranger Mukul Tamuly said by phone.

So far this year, 102 animals have been rescued, while 51 were killed in flood-related incidents in Kaziranga, the officials said.

The floods in Assam this year have been more harmful to farmers as water is breaching river embankments. Hundreds of acres of cultivable land in many districts have been flooded, severely hitting the livelihoods of cultivators.

Over 1.28 lakh hectares of cropland is under flood waters in Assam.

Locals claim that the embankment at Pahumara, a Brahmaputra tributary, was constructed in 1971 and has only been repaired, never rebuilt.

NDTV travelled to Bajali in the Barpeta district to find out why the embankments are the weakest link in Assam’s flood flight.

“Two years back, the embankment snapped near my house, but they did not repair it fully, only on top they made it broad. We even now do not have money to buy masks. Floods are a bigger threat then coronavirus for us,” Kridit Thakuria said.

In the last six decades, Assam has built a network of about 5,000 km of embankments along the Brahmaputra and its tributaries. But over half of these embankments are well past their lifespan.

Last year, Assam had sanctioned almost Rs 1,100 crores for 271 embankment repair projects but according to government sources, majority of them missed the April deadline.

Assam Minister Phanibhushan Choudhury, who was touring the flood-affected areas of Bajali, admitted that the situation is serious.

“The situation is serious. The lifetime of most of the embankments has got over. The government is aware. We will get them repaired,” he said.

The ground level government officials say battling floods and COVID-19 together is a tough task.

Assam Chief Minister Sarbananda Sonowal visited Jonai in Dhemaji district during the day and reviewed the flood situation there.

He also took stock of the prevalent scenario in Lakhimpur and his home constituency Majuli.

The Water Resource Department (WRD) was directed to prevent flooding from the Suwansiri and the Dikrong rivers in Jamuguri and Siyang river at Jonai, and attend to the damage caused to the Kenmili embankment in Majuli, among others.

Stressing on the need to dredge the Brahmaputra as its water carrying capacity has reduced over the years, Sonowal said work on it would start soon.

Noting that strengthening of river management in neighboring states would help in preventing floods effectively in Assam, he asked WRD engineers to bring innovation and newer technologies for the flood prevention mechanism in the state.

In Nepal, at least 50 people have died in landslides and floods triggered by the monsoon rains, with homes swept away and roads and bridges damaged. It has already affected more than a million people.