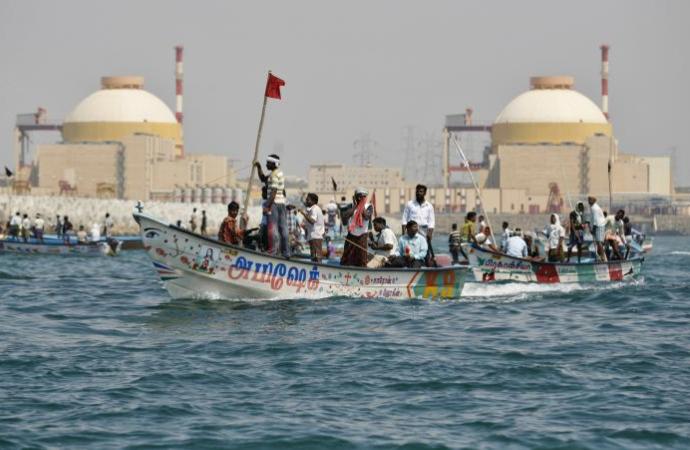 The India-U.S. nuclear agreement represents a $17 billion opportunity for Indian business. It will also help India secure fuel for its indigenous reactors, and contribute to cheap and plentiful energy. But a major concern remains—will these projects be efficiently executed?

The benefits for India are clear: Indian business now has a shot at projects worth Rs 1.05 lakh crores ($17 billion) initially, with more to come over the next decade. For Indian industry, electricity will now be cheaper—nuclear power in India currently costs Rs 2.71 per unit, compared to Rs. 3.3 per unit for the cheapest coal-generated power. And for India’s nuclear industry, this deal will help the country scale up its own indigenous reactor designs and power plants.

India wants to build four nuclear power plants with U.S., French, and Russian collaboration which will generate 10,500 MW of power in the first phase. This can be a $17 billion opportunity for Indian companies (See Table 1). The Nuclear Power Corporation, which will own and operate these plants, has already indicated that up to 50% of the total project value will be sourced domestically, giving a boost to Prime Minister Narendra Modi’s ‘Make in India’ plans. This may increase to 80% in subsequent phases.

Even though the Ministry of External Affairs in its briefing on January 25 said there are alternatives to Westinghouse and Hitachi for technology, these alternative deals will have be negotiated from scratch, negating the painstaking work already done with the Americans through Westinghouse and GE-Hitachi.To enable this opportunity to fructify, two critical details must be addressed. First, India must close a nuclear deal with Japan as well, because Westinghouse, an America-registered company that will build one of the nuclear power plants in India, is owned by Toshiba, a Japanese firm. Japan’s Hitachi is partnering with General Electric for a second reactor.

Second, the transfer of technology to Indian firms has to be clear and measurable–China did this with reactors ordered from foreign firms. As one of the few nations building reactors and helping create and preserve high-tech jobs in supplier nations, India too must get something tangible in return.

For Indian industry low energy prices will be a big boost. Industries across most states typically pay a high price for power, up to Rs. 6 per unit and more, and even then supply is unreliable. Consequently, over 2 million tonnes of diesel is burnt annually for captive generation, which costs well over Rs. 10 per unit; this is a national waste, making Indian industry less competitive all around. Cheap and reliable power will put an end to that.

Finally, this agreement will ensure that India can continue importing nuclear fuel for its own reactors. The India-U.S. Civil Nuclear Agreement enabled India, after 2008, to import nuclear fuel from suppliers such as Russia, Kazakhstan, and France, to run its power reactors, improving their utilisation during 2005-2010 from 50% to 80%.

In fact, Indian reactors are cheaper—at least 25% less than the foreign alternatives. That is the reason India is already building or plans to build 12 such reactors (See Table 2). These   reactors are also a business opportunity for Indian companies. However, all this is possible only with a reliable supply of imported nuclear fuel.

To ensure fuel supply, India needs the continued support of prominent members of the Nuclear Suppliers Group, such as the U.S., France, and Russia. Large contracts for nuclear power plants with foreign collaboration are one way of ensuring that their interests coincide with India’s interests and they gain from India’s entry into the nuclear club.

Although on the whole the agreement between Modi and Obama spells good news, there is a catch. Around the world, nuclear plants are delayed, pushing up costs. French company Areva began building a reactor in Finland a decade ago, and it is still under construction because of faulty planning. Even China is facing delays in a project by Westinghouse. This does not bode well for India, already a case of chronic delays.

There is also the liability clause which, for an India still hurting from the injustice of the 1984 Bhopal disaster, is not clear. The insurance pool (put together by General Insurance Corporation and four other public sector insurers, and the government) at Rs. 1,500 crores will certainly not be sufficient in case of a major accident. It is also unclear exactly how U.S. suppliers will be indemnified against responsibility for an incident, as required by Section 17 of India’s Civil Nuclear Liability Law of 2010. These issues could drag the deal into dissension yet again.

To make it work, Modi will have to put his office and goodwill behind the deal in earnest, and reassure citizens, pressure groups, and businesses that all issues will be sorted out equitably. Only then can the promise of the India-U.S. bilateral begin to be realised, and the prime minister’s manufacturing agenda for India be fulfilled.

[This article was published with the consent of Gateway House.]

[Photo: Demonstrators stand in their boats in the Bay of Bengal during a protest near the Kudankulam nuclear power project in the southern Indian state of Tamil Nadu on Oct. 8, 2012. © Reuters]