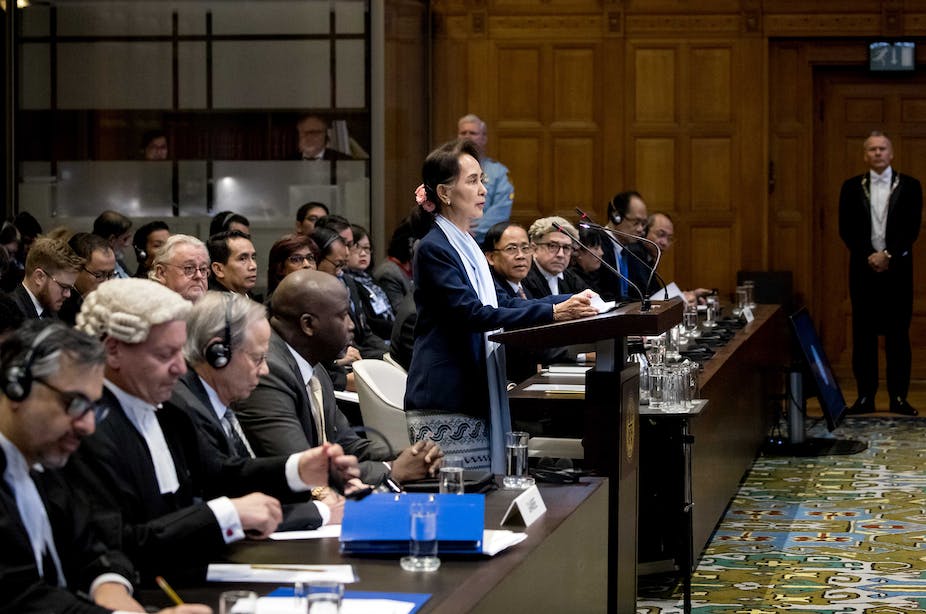 The humanitarian and human rights catastrophe against the Rohingyas deepened in Myanmar when the military campaign of ethnic cleansing began in 2017. For the first time, when a small country used the genocide convention to voice these undertones before the ICJ, it unveiled a jarring turnabout of Aung San Suu Kyi from a noble laureate to apparent defender of brutality.

The exodus of Rohingyas, a predominantly minority ethnic group in Myanmar, has been prevalent since the 1970s, owing to discriminatory policies and legislation. Rohingyas are an ethnic Muslim community, who practice a self-inflected variation of Sunni Islam and thus differs from the Buddhists on an ethical, linguistic, and religious basis. Over one million Rohingyas have been forcibly displaced and more than 91,400 Rohingyas, half of which are minors, have settled in economically disadvantaged overcrowded camps at the border with an imminent threat of landslides and floods.

The indictment by the Gambia

After patterns of sexual violence, systematic targeting of civilians through murder, torture, and arson with impunity for security forces surfaced, the United Nations called it a classic example of genocidal intent and ethnic cleansing. Despite the humanitarian emergency being beyond the scope of justice for decades, it wasn’t a neighboring country or regional power that flexed its muscle, but a West African country the Gambia which set history by seeking protection for these undertones before the world court in November 2020. Not only was it historic to witness a Nobel laureate and once human rights icon, Aung San Suu Kyi defending the genocide before the ICJ, but also to witness a plaintiff using genocide convention for the first time in seven decades with no connection to the subject matter at all.

Gambia has alleged violation of Article 9 of the Convention on the Prevention and Punishment of the Crime of Genocide which provides that any dispute between party states shall be resolved by the ICJ. The Gambia, being a West African country located 11,500 kms away from Myanmar is seeking termination of acts in violation of the genocide convention, criminal accountability of individuals violating the convention, and repatriation of Rohingyas into Myanmar by non-discriminatory policies. Gambian Justice Minister Tambadou said he felt morally compelled to take immediate action when he met the Rohingyas during his visit to Bangladesh for an annual conference of the Organization of Islamic Cooperation. Alison Smith, International Justice Director said,

“The Gambia’s leadership on the Rohingya genocide is especially striking and welcome. Other members of the Genocide Convention should follow the Gambia’s lead and lend their clear and unwavering support.”

Gambia vs. Myanmar at the ICJ

After the International Criminal Court in November 2020 authorized an investigation into the Rohingya crisis, Gambia filed the case at the International Court of Justice. Myanmar is not a party to the Rome Statute (ICC), yet the jurisdiction of the court was confirmed since the crime of deportation ended in an ICC member country, Bangladesh. The case holds state-to-state litigation and not a criminal charge against individual perpetrators which brought the Gambia, with the backing of 57 members of the Organization of Islamic Cooperation, before the International Court of Justice (ICJ).

The Gambia primarily is seeking provisional measures for the protection of the ethnic minorities under Article 41 of the Statute of the International Court of Justice which invokes protection in cases of irreparable loss. Instances of indiscriminate airstrikes and shelling by the military Tatmadaw in Rakhine, grave bodily and mental harm, measures to prevent birth control, arbitrary detention, and torture have peaked in the Rakhine state with no access to UN agencies and International NGOs for humanitarian aid. Repressive laws for the arbitrary and politically motivated arrest of individuals who raised their voices with blockage of internet services violate the right to freedom of speech, peaceful assembly, and information. The court holds the power to order provisional measures when irreparable prejudice has been or could be caused to rights which are the subject of judicial proceedings, and the ICJ instated that the condition of urgency had been prima facie met in the case. While Article 41(2) of the ICJ Statute automatically sends the provisional measures orders to the UN Security Council, Article 94 of the UN Charter gives power to the UN Security Council to decide measures in cases of non-compliance by the state parties. The prohibition of the massacre is asserted as a jus cogens norm by the Gambia which results in obligations erga omnes and erga omnes partes.

When Aung San Suu Kyi, in her capacity as foreign minister, decided to defend the national interest of Myanmar before the ICJ herself, experts took no time to cast aspersions on her competency as a democratic leader. Paving the way for what was going to be an obvious travesty, she claimed that the incidents in Rakhine state were “complex and not easy to fathom” for people outside. It all started with her Barman-centric historiography and Burmese-Budhhist cultural symbols, when trepidations over her unwavering faith in the Buddhist religion raised questions regarding her stance towards Rohingyas. Derek Mitchell, the first U.S. ambassador to Burma deemed the fate of the ethnic nationalities as a “defining challenge”, and Suu Kyi was cognizant of this challenge before coming to power.

Her appearance at the ICJ was deemed as a demand of realpolitik by experts. For the people in Myanmar, who viewed Aung San Suu Kyi as the bulwark for democracy, her lack of concern for the Rohingyas, despite a towering history of xenophobia in the country was, to say the least, perturbing. With the 2020 elections to look forward to and with the Tatmadaw being the strongest political institution in the country, there was little choice but to defend Myanmar against external criticism. To maintain the status quo of her popularity among the electorates and to ensure her survival as the State Counsellor, standing aside and allowing the international community attack was not an option. Thus, despite the xenophobia, she denied genocidal acts alleging distortion of facts by the petitioners, and deemed war crimes as a wage to tackle a Rohingya militant attack on security posts.

On the contrary, the UN investigations have underscored instances of security forces calling families out and executing them, setting homes ablaze, and testimonies of women being raped, killed while unconscious, or tied up. UN Special Advisor on the Prevention of Genocide, Mr. Adama Dieng (of Senegal), based on his own fact-finding activities, including interviews with survivors who had fled to Bangladesh, stated,

“Rohingya Muslims have been killed, tortured, raped, burnt alive, and humiliated, solely because of who they are. All the information I have received indicates that the intent of the perpetrators was to cleanse northern Rakhine state of their existence, possibly even to destroy the Rohingya as such, which, if proven, would constitute the crime of genocide.”

And Suu Kyi’s blatant justifications articulated a misinterpretation of their term clearance operation (nae myay shin lin yeh) which, as she suggests, was termed as early as the 1950s, against the Burma Community Party in Bago Range. The Nobel laureate reached an extent where she described violence as an internal conflict. However, Amnesty International controverted her deliberations and described it as a mix of untruths and victim-blaming. The panel of 17 judges took no time to unanimously vote for an order seeking all measures within Myanmar’s power to prevent violation of the genocide convention. This was in view to protect any imminent bodily or mental harm to Rohingyas, and evidence tampering of possible genocide that has already occurred.

On 20 January 2021, the Government of Myanmar filed “preliminary objections to the jurisdiction of the Court and the admissibility of the Application”. On 28 January 2021, the Court issued an order directing the Gambia to submit a written response to these objections by 20 May 2021. Thereafter, the Court is expected to hold hearings before making a decision on Myanmar’s preliminary objections. While the international community’s perception of the incidents as genocide is set in stone, the case of Gambia vs. Myanmar is still underway. Since the ICJ allows the parties to pursue incidental proceedings until the final judgment, there exists a possibility that they may play a determining role. There exists the alternative of intervention by a third state. It was in the Land, Island and Maritime Frontier Dispute that a state (Nicaragua) was granted the permission to intervene under Article 62 of the statute. As such, any interested state, including Bangladesh can seek to intervene under Article 62 or 63 of the Statute. Lastly, there is the possibility of discontinuance or non-appearance.

Notwithstanding the concluding order of the ICJ, which may take aeon, the seasoned professionals are certain of the case’s perplexity. Owing to Myanmar’s reluctance and its commitment to detour the case, their opinion appears to be well-founded. If the final outcome of the case does allay the angst of an ethnic minority, it will go down in history as a time when a small country with altruistic motives balanced the scales of justice.