Escalating the war in Afghanistan would be the wrong decision 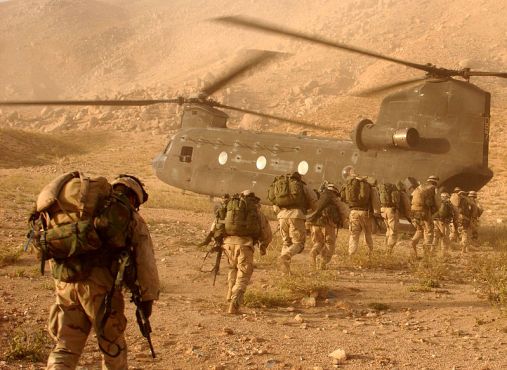 Michael Kugelman is deputy director and senior associate for South Asia with the Asia Program at the Woodrow Wilson Center. The views expressed here are his own.

(CNN)In recent days, with Afghanistan’s Taliban insurgency continuing to gain steam and America’s longest war staggering through its 16th year, analysts have started invoking the v-word (and it’s not “victory”).

Vietnam is a sadly apt analogy. Indeed, just as they did in Vietnam 50 years ago, US troops in Afghanistan are fighting a costly, intractable, and unending conflict against a relentlessly resilient asymmetric foe.

However, it’s not a perfect analogy. The Vietnam War provoked impassioned debate back home, but Americans are hardly discussing the war in Afghanistan. It’s completely off the radar.

It’s high time we talk about this forgotten war, and especially with the Trump administration considering a new policy that would escalate US military involvement. Escalation would be a mistake, and it would further prolong a conflict that can’t be won.

The proposed strategy, according to the Washington Post, would deploy more military force against the Taliban to pressure it to come to the negotiating table.

The problem with the White House plan is that we’ve tried it before, during the troop surge in 2010 and 2011, and it didn’t work — even with the withering firepower of 100,000 soldiers unleashed on the Taliban.

One may reasonably argue that the warfighting capacities of Afghan security forces have improved considerably in recent years, and that these better-trained servicemen, aided by US troops, will have more success tackling the Taliban this time around.

And yet, to assume that more robust military force alone will put the Taliban on the defensive is to badly underestimate the group’s strength and to underappreciate the many different sources of that strength.

The Taliban leadership has safe havens in neighboring Pakistan, and insurgencies never die so long as they enjoy cross-border sanctuaries. The Taliban has also received periodic military support from Tehran. With U.S.-Iran relations having taken a tumble since President Trump took office, such support could intensify. Moscow, according to the US military, is now funneling aid to the Taliban as well.

Additionally, the Afghan government is an unwitting source of strength for the Taliban. The weak and dysfunctional administration in Kabul is hampered by corruption and personal animosities and is hard-pressed to carry out even the most basic of tasks — much less craft a formal counterinsurgency policy.

Meanwhile, the arrival of ISIS in Afghanistan has enabled the Taliban to project itself as a softer, more palatable alternative to the savagery of ISIS. All of this increases the Taliban’s appeal and helps boost recruitment. The Taliban, like all effective insurgent groups, knows how to win hearts and minds.

The takeaway is that the war in Afghanistan can’t be won. But it need not be lost either, so long as the option remains of pursuing a negotiated end to the war. Admittedly, this makes for the tallest of orders; the Taliban’s battlefield successes give it little incentive to stop fighting.

And yet, pursuing reconciliation is the only option, short of a complete US military withdrawal from Afghanistan — a drastic move that would fulfill one of the Taliban’s preconditions for peace talks, but could also lead to spectacular Taliban battlefield gains and increase the possibility that international terrorists would once again use Afghanistan as a base to plan attacks. This is why withdrawal is likely a non-starter for Washington. Reconciliation must be Plan A, B, and C.

Big battlefield triumphs against the Taliban, despite what the White House suggests, aren’t prerequisites for launching a reconciliation process. What’s needed instead is a patient, sustained diplomatic strategy that addresses key questions: What will it take to get the Taliban talking to Kabul? What type of concessions would Kabul be willing to make? Should Washington negotiate directly with the Taliban? Who else should be involved?

Unfortunately, such a strategy is best led by a State Department sidelined by an administration seemingly bent on outsourcing Afghanistan policy to the military (the White House reportedly wants the Pentagon to make final troop number decisions). The risk of a securitized Afghanistan policy is that military strategy will dominate policy discussions and leave critical considerations about reconciliation in the lurch.

President Trump says he wants to start winning again in Afghanistan. However, he’s better off thinking about negotiating than winning. As a businessman who relishes the art of the deal, that shouldn’t be a hard sell. Accordingly, the president should ensure that his Afghanistan policy includes a reconciliation strategy, overseen by diplomats, that maps out a political plan for how Kabul — with US assistance — can pursue a deal with the Taliban.

Reconciliation won’t come easily or quickly, but it’s still worth pursuing. Recall how Colombia, after decades of insurgency and a difficult negotiation process, finally reached a deal last year (albeit a fragile one) to end its long-running conflict.

The Colombia model offers inspiration for Afghanistan — and a more hopeful analogy than Vietnam.

Bloomberg columnist and economist Tyler Cowan, citing a range of factors from a strong stock market to a booming retail sector, declared Pakistan’s economy to be the most underrated in the world. The Wall Street Journal credited a growing middle class for fueling economic growth. Even back in 2015, Forbes contributor Daniel Runde, pointing to reduced instability and promising economic reforms, was predicting that Pakistan could become ‘the next Colombia’.

There has indeed been very real progress. Last June, when Finance Minister Ishaq Dar unveiled the budget for Pakistan’s new fiscal year (which runs from July through June), he announced achievements galore: 4.7% GDP growth, the highest in eight years; an average inflation rate of less than 3%, the lowest in a decade; and foreign exchange reserves of nearly $US22 billion, a new national record. Additionally, last year the investment analysis firm MSCI, citing improvements in transparency and liquidity, upgraded Pakistan’s market status from frontier to emerging, a reclassification that could increase foreign investment inflows.

These economic triumphs are remarkable for a nation long regarded as an Asian troublemaker, not an Asian tiger, thanks to its well-chronicled struggles with poverty and terrorism. In Washington these days, Pakistani diplomats happily hand over meticulously prepared dossiers, replete with snazzy spreadsheets and statistics, to disabuse anyone of the notion that their country isn’t economically ascendant.

There is, however, a more sobering side to this story.

First, Pakistan has crippling energy and water shortages. Electricity deficits have compelled scores of factories, including those dealing with textiles – one of Pakistan’s largest exports – to shut down. Meanwhile, water shortages pose big problems for agriculture, which consumes more than 90% of Pakistan’s water and employs more workers than any other sector in the country. Water woes have prompted many farmers to seek new livelihoods in cities already struggling to provide jobs for their swelling populations.

Second, Pakistan’s export performance is poor. In the first eight months of the current fiscal year, exports fell by 12% when compared to the same period the year before. Pakistani government assessments attribute the slide to economic slowdowns in China and the EU – both key export markets for Pakistan – and low levels of investment in export sectors. However, the chief explanation for Pakistan’s sluggish exports is the same it has been the same for decades: the country’s export mix lacks diversity.

While many developing economies in Asia have gradually embraced the services sector and gravitated away from traditional manufacturing, Pakistan has stuck to low-value-add textiles. It has some high-growth industries, including an impressive IT sector that sends 10,000 graduates into the market each year, but textiles – that face stiff competition from those produced by China, India, and Bangladesh – still account for the bulk of Pakistan’s exports.

Third, the China-Pakistan Economic Corridor (CPEC), a much-hyped, $51-billion, China-funded mammoth infrastructure project, could backfire economically for Pakistan. Islamabad has put most of its economic eggs into the CPEC basket, banking on the mega project’s potential to bring more roads, energy security, and connectivity to a nation that badly needs these things. And yet, there’s reason to fear CPEC may not achieve its potential. Security risks – from separatist insurgents and Islamist terrorists to organised crime outfits – could endanger construction, despite Pakistan’s vows to deploy troops as protection. Additionally, Chinese companies have quietly backed out of several CPEC commitments.

CPEC poses long-term risks to Pakistan’s economy. With so much Chinese investment pouring into Pakistan, other potential foreign financiers could eventually conclude that Pakistan no longer provides a level playing field. Additionally, Pakistan will need to pay back billions of dollars in CPEC-related loans to China – up to $90 billion over 30 years, according to one estimate. Meeting these debt obligations, say some financial analysts, will be a tall order for Pakistan.

Fourth, Pakistan’s economic prospects are clouded by the precarious future of its most critical asset – its young people. About 60% of its 200 million strong population are 24 or younger; the average age is average age is just 22. And yet 25 million 5-to-19 year-olds aren’t in school, millions of children are malnourished, and more than 600 children die each day from waterborne illness. Even those lucky enough to stay healthy and receive an education struggle to penetrate the job market; barely 5% of Pakistanis receive proper technical or vocational training, and many lose out on jobs to more well-connected (albeit less qualified) candidates. Little wonder Pakistan’s labour market has struggled to absorb top-notch, competitive young people into the workforce.

So while Pakistan is an economic success now, the progress of the present and recent past could easily be squandered down the road.