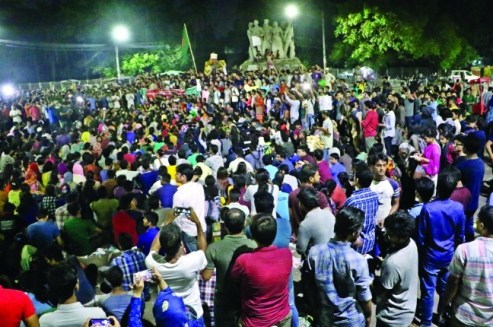 The last few days newspaper reports have surfaced the vicious and brutal faces of Bangladesh government screwed up with hate, thrashing and smashing students protesting against the present quota system. It has caused a stir and chaos in every corner of Bangladesh, which pressurized the Prime Minister to intervene into the issue. But don’t expect any positive outcome as the ruling Awami League has bee truly responsible for making a huge chunk of the meritorious population unemployed and underemployed. There is nothing wrong in demonstrating against such a long and 47 years of prolonged exclusion of common students of Bangladesh from governments jobs. But retaliation of the Dhaka police towards civil society and students responses was terrible, and it once again remember us the inhuman methods of Narcissist Fascist era. But in the political life Bangladesh, police lathi-charge is a daily event and nothing new. They thrash students and civil society activists with bamboo sticks, and it has long been a common practice in the south Asian region. The colonial police devised this method as a means of keeping native subjects under control, disrupting their protests against the colonial state and crushing dissent. H N Brailsford, a well-known journalist, wrote in the 1930s about the British state’s brutality against peaceful protesters elucidates “In official circles, the dispersal by lathi-charges of such a gathering was described as maintaining order.” In Bangladesh’s case, the nation has faced brutalities from two turbulent actors; first from British and later from Pakistan. And so it is now, nearly 47 years after national liberation, such forms of police violence and atrocities are normal and have been carrying on to suppress the youth and civil society movements in Bangladesh.

This time, more than ten thousand students are on streets to protest against the existing quota/reservation system in government job recruitment. A general outlook about quota system says, out of 100 percent, only 44 percent are recruited on a merit basis, and the remaining 56 percent nations job opportunities are allocated under various quotas. Of the 56 percent under quotas, 30 percent are reserved for freedom fighters’ children, 10 percent for women, 10 percent for people for socially backward districts, 5 percent for people of indigenous and ethnic communities and just 1 percent for the physically challenged. The ongoing protest question two aspects of quota system kept for freedom fighters. Primarily, the absurd proposition of freedom fighters quota, that is 30 percent job reservation for a minor section of all population. It makes the emerging youth population in a thickly populated country frustrated and results in huge unemployment and underemployment. Second is the burgeoning number of issuing fake certificates to underserved people. It is reported that in the last few years around 11,150 people of different walks of life given freedom fighters’ certificates. Beside, reportedly 23 police constables were detained on a charge of joining the job by submitting fake freedom fighters’ certificates. Moreover, an investigation conducted by the Anti Corruption Commission found that the certificates of four secretaries of the government were identified as false.

The protesters also questioned the process of issuing certificates to the concerned. The government of Bangladesh has divided the freedom fighters into four categories by conferring a special freedom fighter status/award. These are Bir Sreshto, Bir Uttom, Bir Bikram and Bir Protik. The Bir Sreshtho is the highest military award of Bangladesh. It was awarded to seven freedom fighters who showed utmost bravery and died in action for their nation. They are considered as martyrs. All the recipients of this award were killed in action during the Liberation War. Bir Uttom is the second highest award for individual gallantry in Bangladesh after the Bir Sreshtho and the highest gallantry award for a living individual. A total of 68 people have been rewarded for their bravery and dedication in the war. Bir Bikram has been awarded to 175 freedom fighters for their heroic actions. Bir Protik award was received by 426 people so far, all for their courageous actions. The Ministry of Liberation War Affairs is the only responsible authority to identify and confer freedom fighter status to the genuine freedom fighters. The nodal agency which helps the ministry in this process is Upazila Nirbahi Office. But the last few decades have been witnessed a widespread corruption in this act in issuing certificates. More than 1000 fake certificate cases have been reported. Moreover, the concerned ministry is also involved in issuing certificates to the third generation and grant children of freedom fighters.

So, one could easily assume the frustrations of students behind nationwide protests. Protesters against the system say that it brings inefficiency. Both the Administrative Services Reorganization Committee (ASRC, 1973) and the Pay and Services Commission, 1977 (Rashid Commission) were against the Quota System and observed that this would defeat the purpose of building up a strong Civil Service which the country needs most. Adoption of a well‐conceived recruitment policy lies at the core of an efficient Civil Service. However, a weak recruitment policy is unlikely to ensure the existence of the type of efficient Civil Service system expected in a modern democratic polity. Overall, the existing quota system draws two strong criticisms. Firstly, it is hugely disproportionate, and secondly, it remains enforced for ages. Apart from that, it has left the nation with more grave consequences including the creation of a bureaucracy being devoid of merit. It has been alleged to deprive many meritorious students of getting jobs in the Bangladesh public service. Today, students all over the country have been protesting and demanding a structural reformation including a reduction in the number of quota-based government jobs and merit-based recruitment in vacant posts in case of unavailability of eligible candidates for quota-based jobs, and same age limit for all job seekers.

The student’s unrest due to the dissatisfaction and disappointment over a responsible governments negligence on employment policies in Bangladesh could well explain with a theory of Relative Deprivation. Relative deprivation is a gap between what people get and what they perceived they should get. The essence of this theory is once people’s standards of living have started to improve their level of expectations rises. If improvements in actual conditions drop, the urge to revolt emerges because of expectations are unmet and frustration sets in. This theory assumes that once deprivation is removed, as a state of normalcy will emerge. To a social psychologist, relative deprivation can be so intensely felt and widespread that it can degenerate with little catalysis into mass demonstrations, violence, and political instability. So, relative deprivation is particularly so when the rising expectations coincide with the falling social, economic capabilities to satisfy them. This problem is further compounded when a period of economic and social development accompanied by subsidies, a higher standard of living, is also followed by economic hardship that destroys previous gains. Such a situation provide a fertile ground for social unrests and even revolution in many countries across the globe.

It is not just changes and deterioration’s in social, economic conditions that bring about unrest, but the wide individual or group perception of deteriorating economic conditions. When understanding begins to give rise to frustration, mass discontent, disillusionment, etc., then the possibility of public uprisings or protest is heightened. According to this theory, the self is highly vulnerable to the frustration of life. Obstacles or threats in the environment may cause an individual frustration. Whether these obstacles are in the form of person or objects, the individual reacts to such external figures directly, to ward them off and reduce the anxiety of feeling of guilt. In other situations, the individual may not be capable enough, or it may not be convenient for him/her to express his/her aggressive behavior satisfactorily against the source of his frustrations. In the case of Bangladesh, the level of deprivation that a normal student in areas of education, health and government jobs undergo is immense and unbearable. The recent student’s unrest in many Bangladesh universities reveals that most numbers of students are not satisfied with the existing political and economic policies of the governments. They are also critical about the shrinking space for associational freedom which will adversely affect their freedom of speech and actions.

It is also sad to see the authoritarian way of suppressing students who are on the streets for a genuine reason by a democratically elected government. It again remembers that the present ruling mechanism still has Britishers and Pakistan’s colonial hangover. Students in Bangladesh appear to be beaten up with the greatest frequency. This is a carryover from the pre-independence period when political protests were seen as an ideological challenge to the colonial regime. Police violence to suppress this challenge was justified as a matter of the political survival of the regime. But history shows students protest proved more potent than police violence. Today, Bangladesh has become a country where governments use police strength against their students and young generations, a lathi-charge may seem very low down on the scale of violence. But every act of violence against citizens is a repudiation of a government’s claim to being representative of the people and of a state’s claim to being democratic.

Employing security wing to suppress students making a legitimate claim on the state or voicing political dissent is a violation of basic democratic principles. A democratic state has space for dissent, and its police force is usually led by people who see protestors as fellow citizens exercising legitimate rights, rather than as political subversives whom they have to put down. In Bangladesh, this has never been the case. During the national liberation war, their cause – the overthrow of the colonial Pakistan state – was just, and this made the injustice of the assault on them more unjust. They are not questioning the state to get their demands done and to get adequate representation in the public civil service, education, and health sector. Its fact that the two major parties in the country failed to bring out any positive changes in the existing quota system. Instead, the agriculture minister Matia Chowdhury addressed 80 percent of the demonstrating students as children of Razakars (Razakar was a force of volunteers who collaborated with the Pakistani occupation forces during the Bangladesh War of Independence). But the collective leadership of the student’s movements retaliated and stated ‘No place for inequality in Bangabandhu’s Bangla,’ ‘We want quota reforms,’ and ‘We are not children of Razakars.’ Though Prime Minister Sheikh Hasina announced the slashing of the quota system in government jobs, students will have to wait for long to see it as a government order.