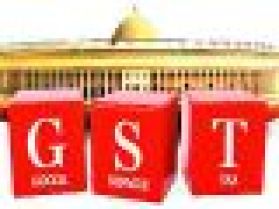 A nationwide Goods and Services Tax (GST), set to come into effect on Saturday, has faced criticism for its complex design. Finance Minister Arun Jaitley on June 29 Thursday asked opposition parties such as Congress and the Left to reconsider their decision to skip the midnight GST launch tomorrow saying they were all consulted on the indirect tax reform and cannot run away from it. “I hope every political party will reconsider and revisit its decision” on not participating in the launch event to be organized in the Central Hall of Parliament, he said.

The government, FM Jaitley said, remains committed to the Goods and Services Tax (GST) as any other reform. “It is single largest taxation reform in 70 years.” All decision on GST, including rules and tax rates, were taken in consultation with states and political parties must display broad shoulder and own up their responsibility, he said.

GST is crucial for the BJP government which has lost the black money issue as part of gigantic demonetization drive that spelled disastrous for the common people for months, and the impact is not completely worn out.

GST, being billed as the biggest tax reform since Independence, will subsume all indirect state and central levies, making India a single market. Under GST law, the producer must have to pass the added benefit of tax reduction. Businesses and their consultants have opposed it and said that it’s against the free market concept.

One of the primary objectives of GST is to make the tax incidence on consumers less by reducing compliance costs, removing cascading of taxes, increasing the tax base, reducing logistics costs and reducing the effective rates of taxes from the present level. Other country experiences suggest that GST led inflationary pressures in an economy because producers have refused to pass added profit to consumers.

GST law said, “Any reduction in the rate of tax on any supply of goods or services or the benefit of input tax credit shall be passed on to the recipient by way of commensurate reduction in prices.” Revenue Secretary Dr. Hasmukh Adhia had said that “We expect companies to cooperate. We hope we don’t have to use the weapon.”

The Modi government wants smooth rollout of the GST on Saturday the 30 June in the parliament. A war room will monitor and take immediate action on a complaint. Government officials have specially alerted to thwart any attempt of cartelization or disruption in the new tax regime.

The government said it would use the circular-shaped Central Hall to launch the new taxation system that is set to dramatically re-shape the over USD 2 trillion economies. A gong will be sounded at midnight to usher in the GST. Prime Minister Modi will be the principal speaker at the function. President Pranab Mukherjee, who is enjoying finals days at the Presidential Palace within Mogul Gardens, is also likely to attend the function. Former Prime Ministers Manmohan Singh and H D Deve Gowda have been invited too. Central Board of Excise and Customs (CBEC) chief said that “The finance ministry has set up a GST feedback and action room specifically for government officials to approach it with any urgent queries related to problems of GST in any area.”

The leader of Indian opposition Congress decided to keep away from the special midnight June 30 meeting convened by the government on GST implementation. Trinamool Congress has already announced its decision to boycott the event. Left parties also boycott the meeting as they reject the GST. CPI (M) general secretary Sitaram Yechury had already questioned the government on “hurrying” into introducing GST and recalled that the ruling BJP had opposed the system when it was in the opposition.

The Left parties will not take part in the special midnight meeting on June 30 convened by the government to launch the Goods and Services Tax (GST), CPI leader D Raja said today. He said the parties would not take part in the meeting given protest by small and medium scale entrepreneurs, traders, weavers and informal sector workers in the way the GST is being implemented. “The Left will not be participating in the midnight GST meeting. People are agitating across the county. We cannot be celebrating when people are agitating,” the Rajya Sabha member said.

The PMO and Indian government officials have specially alerted to thwart any attempt of cartelization or disruption in the new tax regime. The government has created a ‘war room’ to monitor GST (Goods and Service Tax) implementation process, a new indirect tax system which will roll out on Saturday. In North Block, the office building of Finance ministry has allotted a space named as ‘GST Feedback and Action Room.’ Former Chairman of CBEC said that “The government wants these benefits to reach the consumers through these Anti- Profiteering Rules. On the other hand, its widespread application will create chaos and severe disruptions in business”.

Equipped with multiple phone lines and computer systems and manned by tech-savvy youngsters, a “mini war room” has been set up by the Finance Ministry to deal with crises related to the implementation of GST or goods and services tax. The war room is also ready for prompt action from tax evasion to technical confusion on rates to transportation related issues. War room responsibility is more crucial as the anti-profiteering body is still in the process of being.

The country’s biggest tax reform since independence is promising to bring millions of firms into the tax net, boosting government revenues and India’s sovereign credit profile. Until now, all rundown premises and small-scale operation have kept the business below the radar of India’s tax officials. Come July 1, however, “the party will be over,” says the 51-year-old, with a resigned shrug. The new tax will require firms to upload their invoices every month to a portal that will match them with those of their suppliers or vendors. Because a tax number is needed for a firm to claim a credit for the cost of its inputs, many companies are refusing to buy from unregistered businesses. Those who don’t sign up risk losing any customer who has.

India currently has one of the worst tax-to-GDP ratios among major economies at 16.6 percent, less the half the 34 percent average for the members of the OECD and also below many emerging economies. Improved tax compliance should shore up public finances, augmenting resources for welfare and development spending and giving a lift to the $2 trillion economies.
While there is no official estimate of the potential financial gain, some tax experts say the measure, after the initial teething trouble, would lift the tax-to-GDP ratio by as much as four percentage points as the number of tax filers is estimated to more than treble to 30 million. In future, compliance is going to be extremely crucial.

True, not many are interested in paying taxes and as corruption, being religiously promoted by the regime and politicians, has severely affected the tax officials as well, most pay taxes not properly.
The unorganized sector of India’s economy is vast, employing an estimated nine out of 10 workers. While staying outside the GST regime risks losing business, joining it will necessitate an overhaul of firms’ accounting systems and investment in technology.

The new tax regime requires three filing a month plus an annual return – a total of 37 filings – for each of India’s 29 states in which a firm operates. For smaller companies operating on wafer thin margins, hiring accountants and technical staff could substantially dent their bottom line. Ahead of portfolio management services at financial firm in Mumbai says all consumer-facing industries will be significant beneficiaries of the GST.

Most of those who argue for GST are also the supporters of BJP government. Only time will let the people know the real move of GST as India has long ago under the corrupt Congress misrule mortgaged its economic policy to IMF and World Bank and increasingly work to promote American economic interests to gain some favors from Washington. The Hindutva fanatics are too eager to advance these “structured” relations with the USA.

Of the eight million current taxpayers, 6.6 million tax assesses have already enrolled for GST. And about 1.7 lakh new applications for GST have come in. However, the silence inside the headquarters of Goods and Services Tax Network or GSTN, housed on the fourth floor of an imposing glass building aptly named World Mark I right next to Delhi’s international airport, is misleading. Behind white and blue cubicles, professionals with expertise in IT and taxation are putting in extra hours to ensure that the switch over to GST is a smooth affair. The biggest task for GSTN – a not-for-profit company set up to manage and collect indirect taxes – is to help traders and businessmen migrate to the GST platform.

Indian GST Network has developed a tool where you can work offline and upload when there is connectivity. It will take seconds to upload your returns. As the officials test and retest their programs and applications, our question “when was your last off day” made everyone burst out. “We will have to check our records,” said a former banker who’s “measuring end user results of the GST software.” “This is our national service.”

There are serious apprehensions in the minds of people over GST’s implementation. Unfortunately, India is in the grip of international frauds like the BJP MP and IPL boss Mallya. Unless corruption is contained and done away with, a new tax system won’t be fruitful. If the regime lets its supporters to loot the nation’s resources and evade taxes, nothing right or positive is going to come off the envisaged tax reforms.

One also suspects if the governments of Congress and BJP are trying to eliminate the poor and have-nots from the Indian economic system by GST and other such measures as the IMF and World Bank, committed to capitalism and colonialism, are pressing the third world to do away all subsidies to the poor.