Disruptions And Democracy: The Sri Lankan Political Crisis Through A Geopolitical Lens 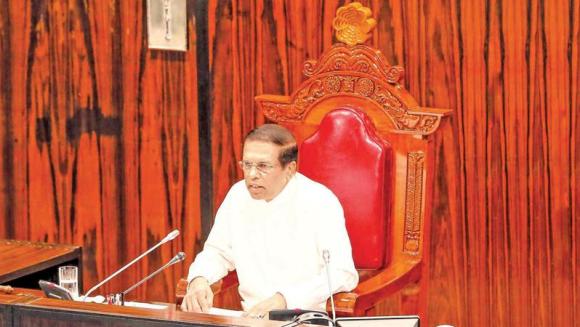 The dissolution of Parliament is the most democratic way of solving the current political imbroglio. Accordingly, President Maithripala Sirisena issued the gazette notification calling for general elections. The Sunday Observer

“The pattern of history cannot be changed. We are the progeny of progression across time and space that shift from small scales to big ones and back again.” John Lewis Gaddis, On Grand Strategy

The  masterpiece the Rise and Fall of the Great Powers  by Paul Kennedy, clearly identifies the shift from the US imperial overstretch and its position to remain as the bastion of global democracy- and its decline.. Kennedy explains, “it has been a common dilemma facing previous number one countries that even as their relative economic strength is ebbing, the growing foreign challenges to their position have compelled them to allocate more and more of their resources into military sector, which in turn squeezes out productive investment and, heavier taxes, deepening domestic splits over spending priorities and a weakening capacity to bear the burdens of defense”.

In 415BC Athens, a maritime power, Pericles strengthened democracy and built a wall to defend the city state. He underestimated their relative decline of strength. It was an overstretched Athenian power that attacked Sicily and took a hard lesson in defeat. It was the beginning of the decline, recorded Thucydides. The expedition was launched on the pretext of being in danger of being ruled themselves, if they ceased to rule others.

In late 2018, the power of the USA is not in calculation with its strength. Further, its own democratic structure in question. The elected President has decided to go against the very foundation and norms of the nation. His rhetoric of nationalism, protectionism and disruptive foreign policy threatens world order as we know it. US hypocrisy is clear in most places they intervened to install democratic values in the recent past including the Middle East. Western intervention was clearly seen after end of the Sri Lankan civil war in 2009. This was seen as interfering with the sovereignty of the nation during Rajapaksa’s regime. Today, they are disturbed by the recent moves by President Sirisena in dissolving the Parliament and calling for elections. On the other hand, the Executive had completely lost confidence to work with the former Prime Minister Ranil Wickremasinghe -who has in turn requested international assistance to restore democracy. One should also not forget that in January 2015, Wickremesinghe was sworn in as Prime Minister in a politically amoral way despite not holding the majority in the Parliament.

Meanwhile, China gives a clear signal that they will not intervene in Sri Lankan domestic political issues. The Chinese Ambassador to Sri Lanka H.E. Cheng Xueyuan visited and congratulated the newly appointed Prime Minister Mahinda Rajapaksa.  According to local media out of the 43 foreign missions, the Diplomats of the US and Europe have stayed away from a meeting with the Sri Lankan foreign Minister recently in Colombo. This move is in protest of Presidents Sirisena’s decision to dissolve Parliament. US ambassador to Sri Lanka H.E Ambassador Teplitz attending parliament to observe the proceedings the day after the super court ruling tweeted  that she is glad that the institution is functioning constitutionally.

Looking at the Sri Lankan situation a senior US administration official said, “I would say speaking about countries generally, not just the country we’re talking about, generally speaking one of the key tenants of President (Donald) Trump’s Free and Open Indo-Pacific (FOIP) concept and our Indo-Pacific Strategy is to protect the sovereignty of countries all across the region.” The FOIP introduced by Japanese Prime Minister Abe now supported by Trump will be used to contain the Chinese influence in the Indo-Pacific. FOIP targets nations who has pledged support such as Sri Lanka and Maldives to China’s grand strategy of Belt and Road according to some scholars.

China’s economic security and  Indian Ocean ambitions is deeply  ingrained  in the Indian Ocean littoral states . Maldives and Sri Lanka are clearly two island nations within the Chinese sphere of influence.  President Solih’s, Maldives newly elected President’s plans to restore democracy and balance the Indian and Chinese regional presence, is yet to unravel. The recent Presidential elect’s actions may be seen in comparison to Sri Lanka President Sirisena’s 2015 plans for a balance and non-aligned foreign policy. .

The geopolitics affecting small island nations has to be calculated closely in this century. To small island nations, China and India represent a  rising power from the same continent and an emerging power.  India id positioned 32km to Sri Lanka and 700 km from the Maldives.. Internal instability is caused by the internal politics only is a badly under evaluated statement.

N. Sathiya Moorthy analyzes the Indian position on Sri Lanka as,“Unlike in shared neighbour Maldives, where India played all its cards in the name of democracy, on the current crisis in Sri Lanka, New Delhi has been holding the cards close to its chest. The return of traditional Indian pragmatism seems to have influenced not only post-Cold War European friends, at least up to a point, of whom some were seen as scaling down their criticism of the Sirisena-Rajapaksa duo, until rumours of imminent dissolution of Parliament began doing the rounds on Friday, November 9th.”

In the Maldivian case, Solih’s predecessor Yameen was labelled as an autocrat and who signed MOUs to strengthen its relationship with China and support the Belt and Road Initiative. Through this, the Maldives departed from an India first policy. This rings of the same manner in which Rajapaksa was labelled with the same Chinese affiliation and support. Will President Solih renegotiate the Chinese projects? And if so,  how much will he succeed is the question. In the Sri Lankan case, it was clear that the renegotiation skill of Prime Minister Wickremesinghe failed. This ended  in the leasing of the strategic port for three generations. I opine that this is connected to Wickremesinghe  eventually losing his own portfolio a few days ago, perhaps not only because of the leasing to China but his strategy of rebalancing China with other powers which threatened the national security of the Nation. In a related geo-strategic incident taking place on Sri Lankan soil, a feasibility study was to be conducted by the Indians to lease out the strategic military air strip belonging to Sri Lanka.

How did the previous election promise of investigations into Chinese projects ended up as a futile exercise? In an article in January 2018,, I expressed that the dragon cannot be contained, Will the same situation unfold in Maldives just like Sri Lanka? President Solih’s new government’s plans for democratization could be weakened from within their allies in the coalition who are neither democratic nor progressive just like Sirisena’s who weakened from inside and failed to balance the spheres of influence from outside.

Internal instability are opportunities for the external powers who will take an upper hand to intervene. Most nations that opened their door to Western powers to restore democracy has seen nations shatter into further political instability and economic decline. Libya and Iraq will being the best-case studies.

Argentina in 1913 was world’s tenth richest country but from 1930 to mid-1970 the country experienced six military coups, alongside political instability, three separate bouts of hyperinflation exceeded 500 percent per year while economic growth rates sank below zero for several years. The Argentinian Government failed to think long term. Among the factors result in a countries growth is clearly political instability and short-term thinking. This is a lesson to many nations in the present day with political instability and short sighted policy explained by Dambiso Moyo the internationally renowned economist in her book Edge of Chaos.

Sri Lanka is no exception to this and is  already at the edge of chaos. The unity Governments with the new bipartisan model was a failure as the two ideologies center left and center right did not create the required space to accommodate diverse opinion. Consensus within the coalition Yahapalanaya government failed at many turns since inception in 2015. What resulted was a constitutional grid lock between the executive and the legislature.

In a shocking move, the Sri Lankan President ended up making his opponent as the Prime Minister. President Sirisena, perhaps accused of constitutional disruption and disloyalty, has placed national interest and the cry for political and economic stability in installing a Prime Minister with the same political ideology.

What Ranil Wickremasinghe failed during the three years was to work his own strategy. His Prime Ministership has been ceased twice on national security grounds. His Foreign Minister was dismissed for investigation on corruption, his own Minister working as a consultant who wrote a book on Central Bank Bond Scam was found guilty accepting funds from the bidders of the bond scam, his closes friend the former central bank governor went missing after the bond scam of Rs11 billion, are serious blows to his office.

The divided house with majority with Wickremasinghe will attempt to claim his legitimacy while the Executive will dismiss this claim sticking to his appointment of President Rajapaksa. This position of President will not change and the Legislature will need to give in to the President’s decision at one point or the house will be in continuous turmoil as one fraction will surround the Speaker’s Chair another will surround Prime Ministers chair to secure the position. The son of the former visionary leader Ranasinghe Premadasa is a popular choice of many from for the next leadership of UNP.

Sajith Premadasa is also clearly seen in this picture perhaps waiting patiently just like his father who came to power after President Jayawardena.

It is time for all party leaders come to a consensus, to reach out common masses to cast their ballot to choose the new Prime Minister.

Yet again, the people of the small island nation of Sri Lanka await stability. Grand geo-strategies of powers looking seaward weigh in, thus, entangling the local to the global, to a measure it cannot be fully understood without one another.

Asanga Abeyagoonasekera is the director general of the National Security Think Tank of Sri Lanka (INSSSL) under the Sri Lankan Ministry of Defense. The views expressed here are his own.The article was initially published by Hudson Institute,Washington DC (http://www.southasiaathudson.org/blog/2018/11/25/disruptions-and-democracy-the-sri-lankan-political-crisis-through-a-geopolitical-lens)