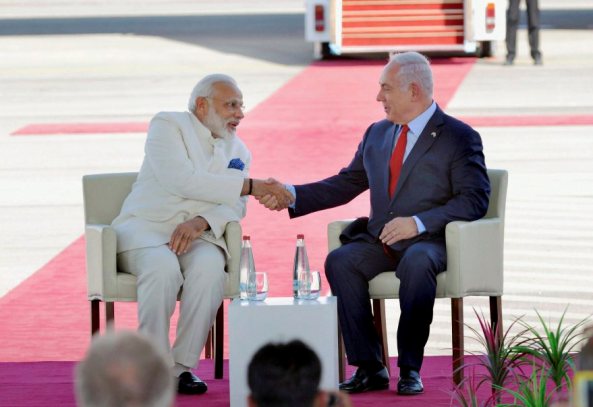 Since the establishment of diplomatic ties between India and Israel on Jan 29, 1992, No Indian Prime Minister visited Israel in these 25 years. Since then both emphasized on the need of stronger economic and security relations.  Narendra Modi is the first Indian PM who broke the tradition and visited Israel on July 4, 2017. He accentuated that the economic prosperity and combating terrorism should be ensured with the bilateral cooperation. India’s second largest defense supplier is Israel after Russia and during thing this visit there are seven agreements signed between the two countries ranging from agriculture to space. Thus this visit marked a palpable and new wave of strategic partnership. India-Israel nexus is giving the expression to the international political environment that they have shared interests not only in the realm of agriculture and medicine but also in defense and against unnamed enemies. The nature of this partnership is beyond techno-economic-military relations and now is political and ideological as Benjamen Netanyahu named sister democracies.

Now it has become a bit obvious from the most of India’s foreign policy commentators that public has acknowledged both countries’ commercial and bilateral relations. The previous decade had witnessed through the Indian media outlets’ regular publication of signing new joint ventures particularly in defense field and covered several Indian Chief Minister’ visits to Tel Aviv to seek the collaboration in agriculture and water technologies. Now it is pertinent to discuss the reasons behind this existing relationship. There are some domestic and international repercussions of a visit to Israel specifically concerning Pakistan as the history witnessed Israel’s military support to India since Kargil War in 1999 along with the unnoticed assistance in agriculture and water technologies to some Indian states. Additionally, its policies are increasingly criticized by the western partners; eventually, it has its successful pivot to Asia by deepening its engagement with China and India.
It is also pertinent to discuss here that, on one side China-India security relations are not entirely trustworthy, on the other side the developing China-Israel relations and Israel-India defense relations cementing India’s privileged defense against China. India’s pre-stance over Palestine cannot be completely de-hyphenated because India cannot afford to fall back into the zero-sum gum what it had followed before 1992.

As Israel is believed to be the second largest source of arms imports for the Indian military, even according to some comments it is the first surpassing Russia as it is the reliable and value free supplier for weapons to India over the years. Israel is getting immense praise for reliability and technological sophistication in defense sector which includes well-entrenched in the areas of Unmanned Aerial Vehicles, air defense systems, Special Forces equipment and electronic warfare equipment.

According to the available information presented to Parliament by Minister of State for Defence Subash Bhamre in March, that from 2015-16 and 2016- February 2017 there are 37 contracts have been signed with vendors of various countries for capital procurement of defense equipment.  Some of them are with Israel second with the US with which mine contracts have been signed.  Israeli media have reported that these two countries see an average of more than $1 billion in defence deals each year. India has been investing tens of billions in updating its old Soviet- era military hardware against long-standing tensions with regional countries China and Pakistan.  In April, a state-owned Israel Aerospace Industries (IAI)  said that India would buy nearly $2 billion worth of weapons technology leaving it the military exporting giant’ largest ever defense contract. According to the deal, IAI would provide India with an advanced defense system of medium range surface to air missiles, launchers and communication technology.

Modi made this trip after his visit to Washington where he and Donald Trump embraced each other as friends vowed to work more closely in combating terrorism, War in Afghanistan and towards defense cooperation. As India is currently the world’s emerging economy and Modi is expecting by drawing more foreign investment to cement its economic growth. Israel’s defense deals have included those components which would be assembled in India. The clear demonstration of their defense ties was the Aril, 2017 $2 billion defense deal for advanced medium ranged surface to air missile system, eventually providing Indian Army the capability to shoot down aircraft, missile, and drones at ranges of up to 70 Km. Previously in September 2016, tests were conducted on the jointly developed long-range surface to air missile destroyers of Indian Navy. Another successful test was undertaken in May this Year of Israeli-made SPYDER quick reaction surface to air missile. Summing up there are five things which define India-Israel relations; Defence, Agriculture, Trade, Diplomacy and water management. During the recent visit, India and Israel signed agreements on science, agriculture, and technology as part of Narendra Modi’s visit to the Middle Eastern country, 2-Defense had been a key driver of Indian-Israeli cooperation, 3-The countries agreed to create a mutual technology innovation fund worth $40 million.

In a nutshell both countries’ partnership in respective fields specifically defense has grave consequences for Pakistan and on the South Asian region. What one can say through enhanced defense cooperation is strengthening India’s military might about that Pakistan has serious security concerns. If India leaves its traditional stance on Palestine by strengthening diplomatic ties with Israel, it is sufficient to say that both Israel and India are going side by side for hegemonic roles in their respective regions. Countering India’s hegemonic aspirations, Pakistan must seek to strengthen its diplomatic relations with other countries by strengthening specifically with Russia and China.