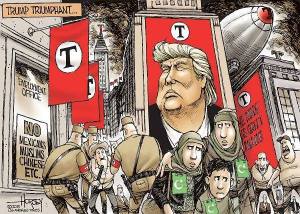 The world was watching closely as President Donald Trump announced that the United States would be withdrawing from the Joint Comprehensive Plan of Action, which is commonly known as the Iran nuclear deal. The US government, during the Obama administration, and the Iranian regime were the two most important players among the P5+1, or E3+3, which helped seal the nuclear agreement. The other signatories of the nuclear pact are Russia, China, France, the United Kingdom, and Germany.

There appears to be a considerable of amount of misinformation about the US decision, what actions can be taken legally, and what the corresponding implications and consequences are. It is crucial to point out there are three distinct processes to pay attention to: The first one is linked to certification of the nuclear deal; the second category is related to the subject of issuing a material breach report; and the third is associated with the president’s power to waive the re-imposition of US sanctions against Tehran.

Under the Iran Nuclear Agreement Review Act — a bill that was passed by the US Congress in May 2015 — the US president must issue or decline a certification for the Iran nuclear deal every 90 days in order to notify Congress of Tehran’s compliance with the JCPOA. Moreover, instead of certifying or decertifying the nuclear deal, the president has another option, which is to issue a material breach report. To do so, the president would have to provide a breach report to Congress. If the president does not certify the deal or if he submits a breach report to Congress, this will trigger a 60-day window within which Congress will have time to introduce and pass legislation to re-impose US nuclear-related sanctions against Iran.

Congress has the choice of whether to re-impose some or all of the sanctions that were lifted due to the nuclear accord. The legislation must be introduced by the majority or minority leader in the Senate and House of Representatives, and such legislation would be processed on expedited terms. If Congress does not pass any legislation in the 60-day window, the nuclear deal will remain intact in spite of the fact the president has decertified it or submitted a material breach report to Congress. This scenario is exactly what happened in mid-January, when Trump declined to certify the nuclear deal. However, Congress was reluctant to introduce and pass legislation during the 60-day window. As a result, Iran continued enjoying all the fruits of the US sanctions relief.

The third category is tied to the power of the US president to sign a waiver for re-imposing US primary and secondary sanctions against Iran every three months. The president’s latest decision to pull out of the nuclear deal is directly linked to this category.

In other words, Tuesday’s decision was significant due to the notion that Trump is not waiving the US sanctions against Iran.

What sanctions will be re-imposed after the US has pulled out of the nuclear deal? To put it simply, primary sanctions are designed to punish US persons or institutions that deal with the sanctioned party (the Iran regime or specific Iranian individuals and organizations). Secondary sanctions widen the scope of the punishment by targeting Iran’s industries, including oil and banking, as well as foreign entities that deal with the sanctioned entity. European countries continued to do business with Iran after the US decertified the nuclear deal in January because Trump signed a waiver to continue suspending US sanctions against Tehran. However, foreign companies now face a significant risk in continuing doing business with the Iranian regime.

What is the next step now that Trump has abandoned the nuclear deal? Secretary of State Mike Pompeo and Treasury Secretary Steven Mnuchin will work together to re-impose the sanctions on Iran.

The US Treasury will not re-impose economic sanctions immediately. Instead, there exists a 90-day and 180-day window period. On Aug. 6, some of the sanctions will be re-imposed, and on Nov. 6 the rest of the sanctions, which were lifted in 2015 due to the nuclear agreement, will be reactivated.

This wind-down period is likely designed to give time to foreign companies and corporations to leave Iran’s market and halt their dealings with the country. If they don’t, they will face the consequences of the US sanctions.

It is worth noting that another differentiation to make here is between the US sanctions on the one hand, and the UN Security Council sanctions on the other. The primary and secondary sanctions were unilateral US actions that were lifted by the Obama administration to appease Tehran and get the nuclear deal over the finishing line. The UN’s four rounds of sanctions against Iran, which were also lifted thanks to the nuclear agreement and would be re-imposed if Iran does not comply with the JCPOA, were reached by consensus among the five permanent members of the Security Council.

In technical terms, the US decision to leave the nuclear deal and re-impose primary and secondary sanctions does not mean that the UN Security Council’s sanctions will automatically snap back. Other members of the nuclear deal can decide to keep the JCPOA, continue doing business with Iran, and face the negative consequences. Since the president has declined to waive the US sanctions, the Trump administration still has two options: Trump can continue declining to waive all the sanctions, or he can decide to re-impose some of the sanctions. For example, he could re-impose sanctions against Iran’s banking system, and later re-impose sanctions related to its oil and aviation sectors.

Finally, The US decision to pull out of the nuclear deal, as well as the re-imposition of US primary and secondary sanctions against Iran, will create significant challenges for the Iranian regime and its state apparatuses to do business with foreign corporations. Large corporations and foreign firms ought to be extremely cautious of conducting any business with Iran because they will run the risk of losing their business with the US.