Cracks beginning to appear in the Russia- India relationship

But Washington’s interests might actually be servedby New Delhi and Moscow muddling through. 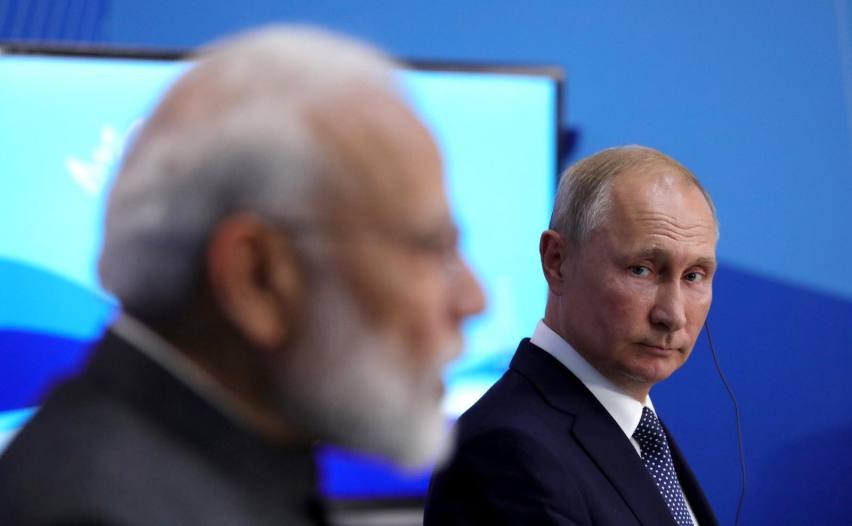 Vladimir Putin listens as Narendra Modi speaks to the media following Russian-Indian talks in 2019 (Kremlin.ru)
3 Mar 2021     Lowy Institute
India’s annual summit with Russia was cancelled last year for the first time since its inception – the official reason, as was commonly blamed for many abandoned events, Covid-19.

The summit’s cancellation was a rare hiccup in what has otherwise been a traditionally close partnership. Moscow has consistently proved itself to be a reliable partner to New Delhi in times of need, drawing comparisons to China’s “all-weather friend” relationship with Pakistan. Ever since a US arms boycott of the subcontinent during the 1965 Kashmir War, Russia (then the USSR) has been India’s go-to arms supplier. While the US backed Pakistan during the 1971 Bangladesh “Liberation War” – sending an aircraft carrier into the Bay of Bengal – Moscow supported India. When India conducted its second round of nuclear tests in the late 1990s, Russia – again unlike the US – did not publicly criticise New Delhi and actually aided its incipient nuclear program.

On the vexed issue of Kashmir, Russia has traditionally used its veto power at the UN to block critical resolutions. India has reciprocated with measures of its own – by, for example, appearing to tacitly endorse Russia’s annexation of Crimea in 2014. During India’s deadly Himalayan stand-off with China last year, Russia halted its delivery of S-400 defence missiles to Beijing – likely because of Indian pressure.

So despite the pandemic, the cancellation of the bilateral summit is very much against the grain of the historical relationship. Covid-19 could also be a convenient excuse to mask what is likely to be Russia’s growing unease about India’s deepening security ties with the US, especially New Delhi’s active participation in the Quadrilateral Security Dialogue, aka the “Quad”.

In Moscow’s view, the Quad undermines Russian interests on several fronts. Moscow has favoured a Russia-India-China (RIC) trilateral formative to advance a variety of security and diplomatic objectives – ranging from the normative promotion of the inviolability of state sovereignty to the pursuit of a more multipolar, less US-dominated global governance and security architecture. Commencing in the early 2000s, a number of initiatives have sprung up under the RIC umbrella, including through the Shanghai Cooperation Organisation and the BRICS initiative involving Brazil, Russia, India, China and South Africa. Russia doesn’t want the Quad to become a wedge between India and China.

Moscow also has a natural aversion to “exclusive” security mechanisms, because of its vexed relationship with NATO. This is the case even if Russia quietly has significant reservations about the prospects of a China-dominated Asia. While China is clearly the Quad’s main target, there remains some sense within Moscow that the Quad also seeks to contain Russia.

Russian Foreign Minister Sergey Lavrov has also suggested that the Quad will inevitably harm Russia’s relationship with India. This view is not entirely far-fetched, especially when Washington’s Countering America’s Adversaries Through Sanctions Act (CAATSA) is considered. CAATSA – which threatens sanctions on any country purchasing Russian military equipment – has significantly complicated security partnerships for the US in Asia, particularly with Vietnam and Indonesia.

India has been no exception. The Trump and Biden administrations have both refused to rule out sanctioning India if it purchases S-400 defence missiles – or even other less sensitive Russian equipment. As India extends its security relationship with the US, both bilaterally and through the Quad, the pressure on India to significantly reduce purchases of Russian military equipment will likely only mount.

Rather than driving the wedge further, the optimal response from Washington would actually give New Delhi a degree of manoeuvrability.

Amid Russian disquiet and the US pressure, India has tried to chart a middle path. While politely rebuffing Russia’s concerns over the Quad, New Delhi has also doubled down on its pledge to buy S-400 missiles. India has also initiated a trilateral grouping with Japan and Russia aimed at stimulating investment in Russia’s sparsely populated Far East. The trilateral is aimed both at reassuring Russia of the “inclusiveness” of India’s vision for the Indo-Pacific and easing Moscow’s reliance on Chinese investment in a region which was once partly controlled by the Qing Dynasty.

How should the US respond to what, prima facie, appears to be an opportunity to further isolate Russia?

Rather than driving the wedge further, the optimal response from Washington would actually give New Delhi a degree of manoeuvrability. In particular, by threatening New Delhi with CAATSA sanctions, the US is effectively asking New Delhi to make an unpalatable choice between it and one of its most established security partners. A traditionally avowedly non-aligned state, India was never going to become a Japan-like US ally overnight. Undue pressure on India to pick a side may well also complicate New Delhi’s calculus for deepening its engagement with the Quad, particularly after New Delhi and Beijing appeared to de-escalate tensions through the partial withdrawal of troops in disputed border areas.

Nor is a strong Russia-India relationship necessarily contrary to US interests, not least because it helps reduce Russia’s reliance on China. Russia for example, has deliberately brought India into the fold of the Shanghai Cooperation Organisation to help balance China in Central Asia. Russia and India have also jointly developed the BrahMos cruise missile, which has the potential to significantly augment the position of claimant states in the South China Sea.

While not everything about the India-Russia relationship is compatible with US interests, in dealing with the China challenge, Washington may realise that a functional Russia-India relationship isn’t necessarily such a bad thing.