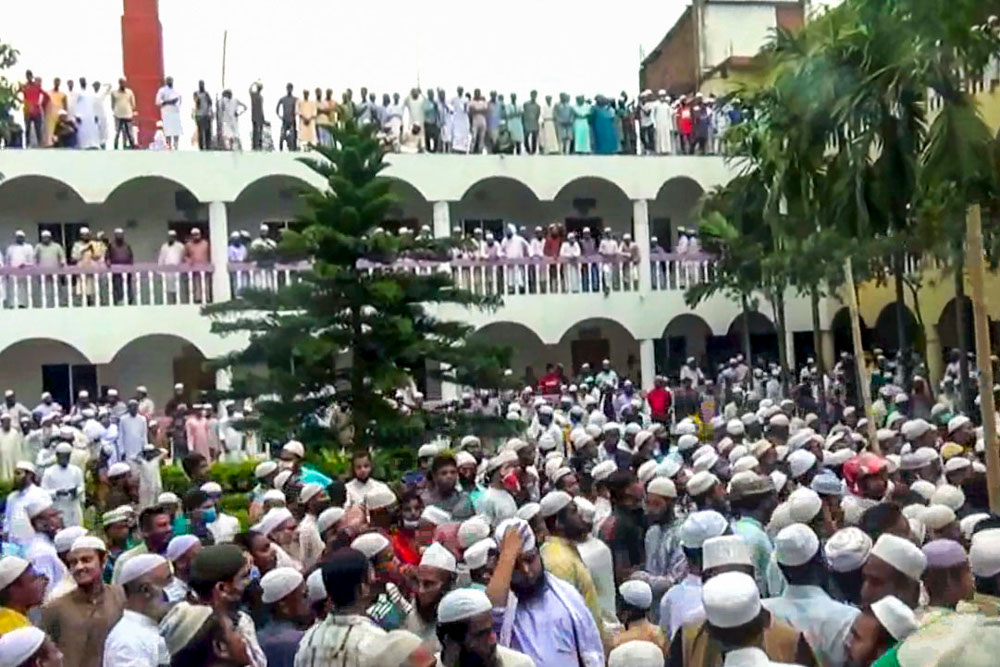 Ten more coronavirus deaths were also recorded during the previous 24 hours that took the national toll to 101, according to health officials who said the funeral crowd could aggravate the pandemic in Bangladesh, one of the most densely populated countries in the world.

“We are in a great crisis. Unless we strictly follow the lockdown guidelines, we cannot stop a surge of deaths in the future,” Nasima Sultana, an additional director general of the directorate of health, told reporters during an online briefing.

The total number of cases nationwide is closing in quickly on the 3,000 mark. During the past week the figure has tripled, going from 803 cases on April 13 to 2,948 on Monday.

Officials pointed to people not obeying the government’s instructions to remain indoors and avoid large public gatherings as a reason for the soaring number.

“We have repeatedly been urging the people to understand the gravity of the infection and stay at home. The shutdown is for containing fresh infections and preventing death. But people are not abiding by the government order to stay home,” Health Minister Zahid Maleque told BenarNews.

“If people do not stay home, the numbers of infections and deaths are likely to shoot up,” he said.

In Singapore, meanwhile, hundreds of Bangladeshis who went there for jobs have contracted COVID-19, according to Singaporean health officials and Dhaka media reports.

Globally, more than 2.4 million infections have been recorded while the death toll stood at more than 168,000 as of Monday, according to data compiled by disease experts at U.S.-based Johns Hopkins University.

To stop the spread of COVID-19 in Bangladesh, the government ordered a shutdown beginning on March 26 to continue through April 25, with officials declaring the period a “special holiday.”

Despite the government’s efforts, Bangladesh has seen COVID-19 cases skyrocket in recent days after recording its first case on March 8 and seeing the number increase to 218 one month later.

“You are right that people are not abiding by the lockdown order of the government despite efforts of the armed forces and the law enforcement agencies. As the situation turns bad to worse, we must be tough to force the people to obey the government order,” Khan told BenarNews.

“You will see that in the coming days,” he said without elaborating.

On Saturday, tens of thousands of Muslims gathered at Jamia Rahmania Madrassa in Bertola village in the Brahmanbaria district, about 100 km (62 miles) from Dhaka, for the funeral of senior emir Maulana Jubayer Ahmed Ansari.

Amanul Haque, the madrassa’s vice principal, said organizers did not ask Muslims to attend the funeral for Ansari, the principal founder of the madrassa established in 1991.

“Maulana Ansari is a great Islamic scholar. At least 1 million followers listen to his speeches on YouTube,” he told BenarNews. “As the news of his death spread, people poured into the madrassa. We had no idea that there would be a human flood.

“If we asked people to attend, there would be uncountable number of people in the Namaz-e-Janaza [Muslim funeral prayer],” Haque said, adding organizers did not know that COVID-19 spread through human contact.

Brahmanbaria district police chief Mohammad Anisur Rahman said that a three-member investigation team was trying to determine whether madrassa authorities had planned for a large gathering or if the mourners showed up on their own.

“We have locked down eight nearby villages from where the mourners mainly came. They will have to be in quarantine for at least 14 days. If we find anyone secretly planned the gathering, we will take action against him,” he said.

“How irresponsible are we that thousands of people stood touching their bodies to attend the funeral at this critical moment. Nearly a month ago, we saw huge gathering for prayer to get rid of coronavirus,” he told BenarNews.

He said the gathering and other incidents likely would increase the number of COVID-19 cases in Bangladesh.

“The government bans movement, but people have been moving freely at market places and intersections,” said Ruhal Haque, a physician. “Only the Almighty Allah, can save us from an impending health catastrophe.”

As cases spike nationally, the number of infected Bangladeshis in Singapore appears to be growing as well, according to the city-state’s health ministry and Dhaka media.

The Singapore health ministry has recorded about 8,000 COVID-19 cases, including 1,426 in the last day. Of those new cases, only 18 were Singapore citizens while more than 1,300 were work permit holders living in dormitories inhabited by Bangladeshis and others.

“One of the reasons of higher number coronavirus infections among the Bangladeshi workers in Singapore is they live at congested dormitories with little ventilation. Again, they work very hard and have limited space to sleep,” Syed Saiful Haque told BenarNews.

“The employers in Singapore are better, so, they should take care of the hapless workers who work for them day and night,” said Haque, the chief of WARBE Development Foundation, an NGO dedicated to the welfare of Bangladeshi overseas workers.