Corruption in India: The Roadblock to National Prosperity 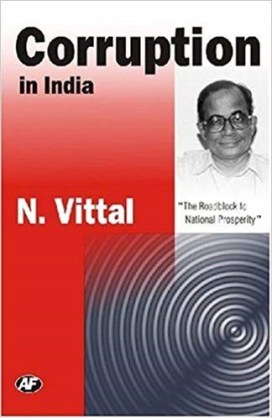 “The World Bank defines corruption as the abuse of public offices for private gain.” Corruption is not a one size fits all phenomenon’s’. However, it has a variation to place to place, state to state and nation to nation. Political commentators believe that corruption has direct effects on national prosperity as well. India is no more exceptional country when it comes to the question of corruption. In India, a man is not corrupt until and unless he/she did not get the opportunity to do something illegal. The book “Corruption in India: The Roadblock to National Prosperity” authored by N. Vital explains the very essence of corruption in India. He argued that fighting corruption is like fighting a war.

Although politicians make a promise to end corruption during election rallies but once they come in power, they fail to implement their commitments. The reasons are simple they are already involved in petty corrupt practices and scams. Thus the very essence of democracy dies in itself when the ruling party along with opposition is engaged in corruption.

According to the Vittal, India is a country where 26 percent of the population lives below the poverty level, an elite class of business holders has grabbed the whole wealth in their hands. That is why it has been widely believed that any effort at financial advancement may lead to poverty. For Vital IRDP has come to mean not the Integrated Rural Development Program but rather ‘Idhar Rishwat Dena Padega (P 44, Ch 2).

The Black Money which has become oxygen for corruption is the lifeblood of financing of the political process in India. That results in an endless loop of business corruption, bureaucratic corruption and criminal and criminalization of politics (p 51, Ch 4). Many people argued that corruption had been found in the human component of greed. It is the underlying driver of corruption if we consider crime ought to be authorized or not, but rather we need to remember element of insatiability, and we are committing a principal error. In fact, corruption can’t be dispensed with and in this way legitimizing corruption won’t be the answer for handling the issue of corruption in India. For the author, the level of corruption depends on three factors (a) the individual sense of values. This depends on his family background, religious background and culture; which he/she brought up. (b) Social benefits and, (c) the system of administration, the legal framework and the institutions that form the basic structure of government. N. Vital have observed that in India, there are four major players in corruption. These are the Neta (the corrupt politician), Babu (the corrupt official) Lala (the corrupt businessman) and the Dada (the criminal) (P 88, Ch. 7).

Though, RTI act brought greater transparency in the system. At the same time, two revolutions like green and white gave the leadership direction, followed by the effective technical and administrative action for effective administration. It is an only effective administration that leads to a possible strategy for the better improvement of the nation. If we want to prevent the corruption, then sensitization of the youth is the necessary arrangement. A legal instrument like one is Prevention of Corruption Act 1988 and Prevention of Money Laundering Act 2002 can help to a great extent. Money Laundering Act is one of the important aspects so far as global corruption is concerned. Sending the corrupt holders of public office to jail is a remedy. Therefore, the best strategy for preventing corruption is to need to utilize a law, which will prompt confiscation of property (P 91, Ch 7). But at the same time need is to streamline the education system so that citizens can honestly deliver their duties.

So far checking corruption in the organization is concerned, the CVC is following a three-point strategy. The first is a simplification of guidelines and methodology with the goal that the extension for debasement is diminished. The second is straightforwardness and engaging general society, and the third is an effective punishment. Furthermore, utilize data innovation with the goal that the procedure is straightforward, and in this way, duty settling winds up to be less demanding because straightforwardness will prompt responsibility and responsibility is estimated as far as satisfying the desires of investors and partners are concerned. One can say that similar rationale mutatis mutandis can apply to responsibility in the organization so that corruption can be tackled in a better way.

However, the media have to play an important role to expose the case of corruption wherever needed. It is the moral duty of the media persons as people generally believe that media is the fourth pillar of democracy. Let we take the example of the Kargil War; it was media that played a role in exposing scams with the help of the Comptroller Auditor General (CAG) of India in defense Fodder Scam. The essential needs for good administration are the corruption-free administration that must turn into a fundamental right of every citizen. Nowadays people talk of good governance; it can be achieved through universal human right and proper implementation of laws by the executive. The right to good governance must be a piece of human rights as a subject in academic fields and other areas. Democracy ensures that, the government of the people, by the people and for the people as the best model for good governance (P 184, Ch.12).