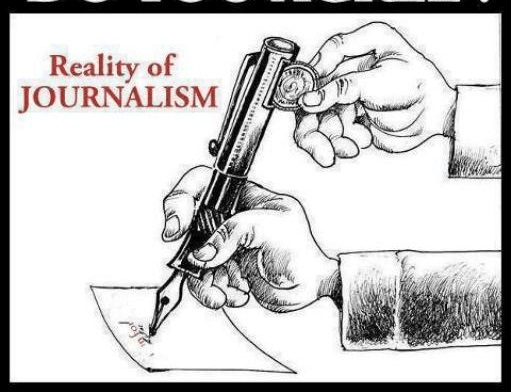 Independent and well-funded public media play an instrumental role in supporting and maintaining effective democracies. This era portrays a biased media and a divided or biased democracy which is far beyond the real meaning of democracy.

Part of this democratic breakdown is because of the media and the one-sided representation which is meant to sensationalism and attract “eyeballs” than to inform the audiences. Democracy in the real sense meant a world where the power is delegated by all the citizens- and the main point was to create a voice for that matter to the most. Journalists become entertainers and have repeatedly participated in creating a one-sided idea for the audiences thus dividing the society further.

The paradoxical democracy was created long back in 1947 when the country was divided into Pakistan, later Bangladesh, and India-separating people based on religion. The people more strongly identified themselves as Hindu -Muslims – Sikhs than ever before. They killed each other for invading their personal religious spaces. The idea of democracy started falling off. Several constitutional laws and policies were constructed to safeguard the rights of the diverse ethnic groups- but the discrimination which was so ingrained in the minds of the citizens carried on.

Since 1947, we witnessed a huge number of ethnic riots and protests claiming an equal status and position in society. The recent one being the anti-CAB protests. The question that arises here is what role has media played in bringing the varied voices together? Instead, media has played an agent provoking people for one cause or the other, never really giving them a neutral idea of the society.

From a media and communication scholar perspective, I believe the Indian media has been power and class-oriented, apart from being entertainers. Indian media was called as the fourth pillar of democracy; however, we see the pillar collapse along with the society- which is known as the biggest democracy.

To understand the media’s role, let’s look at the role of electronic media in the last 3 months i.e. from July to September 2020. Here, I consider only the electronic media, because during the COVID era, and the difficulties surrounding the delivery of newspapers, TV is being widely consumed media. The whole of India, sitting behind the walls and social distancing from their friends and family look forward to knowing about the society from the TV news.

Instead of being the informants, the 24hour news channels took turns to feed the tastiest news to attract audiences and gain TRP. After the death of an evolving Bollywood actor- Sushant Singh Rajput, social media turned their attention towards his death and came out with interesting, often fake facts and news to keep the audiences hooked to know more about their beloved actor. Interestingly the public responded, and they came with numerous accounts on social media platforms to voice for justice. Over time, we saw the voices grow stronger and the development of bizarre narratives. This reflected the power of voices, the positive side of democracy.

However, what media and the audience missed are the numerous other deaths and disasters. The Bihar floods, which occurred around 23rd August 2020 and affected approximately 83.62 lakh people, hardly got any screen time. A few survivor accounts of the Bihar flood claim and the absence of proper government action, hunger, and utterly unhygienic living conditions. The Indian media did mention about the floods but reflected it as one of the ‘not so important’ regular flood stories that occur and kill millions in India every year. In a way, the media failed to even address the struggles of the victims.

Chesney states that- Internet doesn’t clearly just set us ‘free’ but instead reflects a reassertion of the existing dominant narratives on the mainstream media. Trying to be a “free” citizen, I too posted a video of the survivors on my b account and not one commented or responded, while I got numerous Facebook friends furious on my previous article Media vilification and patriarchy. This reflects the biasedness of voices.

Going by the airtime in the months of July, August, and September 2020 approximately 20 minutes of a half an hour show was about SSR and whether his girlfriend Rhea is a witch? Whereas, the rest 10 minutes were about the secondary issues of Indio-China relations, growing COVID numbers, numerable deaths, drowning GDP and rapes, migration, hunger.

Overtime a period of three months, the discourses that acquired space, time, and coverage by media and within the public were on Kangana Ranaut, Bollywood nepotism, ban of Bollywood, and upcoming elections. The audiences hardly voice for the rights of their fellow ‘other citizens’ such as Dalits, migrants, lack of beds, and the poor. This reflects that media is creating a biased view which only inclines and calls for service towards the rich-successful Indians and not the once who are metaphorically-dying every day.

In the last month’s people- journalists, scholars, scientists, and protestors have been arrested and jailed for talking for or against certain issues and cases. In a country where the freedom of speech constitutes an important part of democracy, such jailing reflects a dying democracy. This dying democracy and the rhetoric were further suppressed by the lack of the discourses in the media and which like other above discussed cases failed to call forth the citizens to demand justice.

The media scholar McChesney had quoted ‘Rich Media Poor democracy’, where we see an era of declining journalism, hyper commercialization of culture and anti-democratic stances. Is it the same with Indian media as well? We see an increased reflection on one-sided narratives, and sensationalism by feeding on the dominant narratives and polarising the people based on their cultural notions and political ideas. Bringing back the SSR and Rhea Chakraborty controversy, the news media has divided the already diverse country into Pro-Rhea and Anti-Rhea groups who fight to support their believes and justify their ideas.

The country, which is already divided by race, caste, class, is being further divided. Divided based on media narratives, again a narrative that does not have a strong base to it. Undermining the conditions of democracy can make it more biased and hence the media as a powerful tool can be utilised in an effective way to strengthen democracy than dividing it.