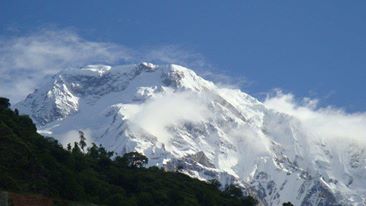 Involved in drafting team of Intended Nationally determined Contribution (INDC),  Ugan Manandhar , talks about the document.” Nepal prioritizes adaptation but is looking forth to sectoral low carbon development options in its INDCs” he says.

Manandhar is Deputy Director of World Wildlife Fund Nepal. He has been following negotiations as a government delegate since 2008 following adaptation, REED and mitigation issues on behalf of government. He knows what impact Nepal is facing, a Least Developed Country that has adverse impact of Climate Change, urgency to address it and one of the way is to having the plan in INDC, NDC document. “Temperature is increasing; heavy precipitation days are increasing while number of rainy days is decreasing.  With its limited resources, capacity, and finance it becomes expensive for Nepal for adaptation in various sector such as water, energy, agriculture, tourism, energy, infrastructure, biodiversity and mitigation to Climate Change” he says.

The most two affected sectors which is brining economic loss are agriculture and tourism while impact in water is bringing water scarcity which directly affecting health due to Climate Change in Nepal.

Nepal rely its economy from tourism. It generated 3.5 million dollar every year from foreigner only climbing Mount Everest. It is having adverse impact in tourism industry due to climate change. In Nepal very less research has been done on climate change and impact in tourism. Although we are aware that climate change has not only affected climatic factors but has changed the natural. According to recent research, one of the Tourist attraction point RARA Lake, water has dipped by 1.5 meter. Tourist in Nepal mostly comes to trek in mountain areas. Thousands of people live in that area and rely on restaurants, lodges for daily living. The Beauty Mountains are in threat of losing its snow cap. It is predicted that by 2050, these mountains will have no snow cap as the rate of temperature increases. 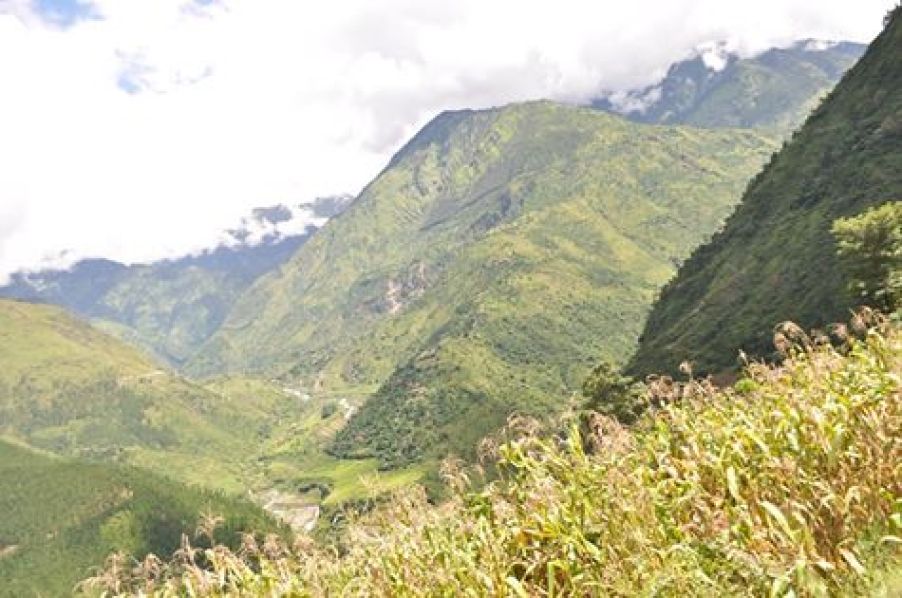 “Over the past few years there has been increasing recognition of the risks and opportunities that climate change has brought to tourism”  mentioned in  Becken & John, 2010.

Researchers from the United Nations Environment Program (UNEP) and the International Centre for Integrated Mountain Development (ICIMOD) identified 3,252 glaciers and 2,323 glacial lakes, of which 44 are filling rapidly, and that might burst in as little as five years. Considering the average vertical lapse rate of 6.50C km−1, the present glaciated area above 5,000 m is likely to be free of snow with an increase in temperature of 10C in the next few years. Similarly, rising global temperatures have shrunk the total area of Nepal’s glaciers by almost a quarter between 1977 and 2010, with an average of 38 sq. km (14.67 sq. miles) vanishing every year, according to ICIMOD. This is causing mountain to lack its snow cap and beauty which is definitely decreasing tourism in those areas.

In 2013, avalanches killed 16 people in Mt. Everest that was associate with climate change. In 2012, more than 60 people, three Ukrainian tourists among them, were killed in the popular Mount Annapurna region in western Nepal.

Not only mountains the cities like Pokhara, Chitwan are one among tourist place. These places are equally having impact of climate change. In 2012, Pokhara experienced devastating flood originated from Glacier Lake Outburst Flood. While in Chitwan, People are experiencing warmer days than ever.

“The tourism in Nepal has declined due to loss in its beauty in mounatins as a result of climate change, with recent earthquake and India blockade, it has been worst” says, Niraj Tamrakar. He  is climate change champion 2009, Honored by British council, Program coordinator of PowerShift Nepal campaign and President of Tourism Development Endeavors Organization. He has also been involved in trekking and tourism and climate change based activism in Nepal since decade.

Geographically, Nepal is divided into three east-west ecological zones: the northern range – the mountain, the mid-range – hill and the southern range – terai (flat land). The changing climate has delayed the monsoon rendering thousands of hectares of farm land fallow and reducing the productivity of the land due to lack of rain according to Regmi & Adhikari, 2007. The impact of Climate Change is severe in context of Nepalese farmers because of the country‘s geographical and climatic conditions, and lack of access to resources to cope with the changing climate.

“The production is highly affected by diseases and variation has occurred especially in maize. Production of local Chino and buckwheat has also decreased from past due to change in climate, use of chemical fertilizer, pesticides and introduction of new species.” said Late Angad Hamal, resident of Dunnai.

According to ICIMOD, it found that the existing strategies are insufficient to provide safe and adequate water in Kathmandu Valley. This is proved by the fact that more than five million people would be deprived of the minimum needed water by 2050 even under the current climate which would become worse under the driest scenario of climate change.

A research published in internal journal for water resources development shows a gradual slight decrease in annual average rainfall, by 0.9% of baseline in the 2020s, 1.4% in the 2055s and 3.0% in the 2080s. There is a clear increase in rainfall during the early winter months (120% of baseline for November and 102% for December by the 2080s), and a small increase in spring and early summer, but a decrease in late winter, mid-to-late summer, and autumn. These results indicate that farmers will need to adapt to changing rainfall patterns.

Cities like Kathmandu, Bhaktapur, patan, are facing severe scarcity of water. These places have stone spout and pond which is the source water and recharge system in areas. But these are drying out. According to resident of Bhaktapur, It has only been ten to fifteen years that these water resources were drying but it has completely fried by now.

According to my research paper, reseacrh in three places of Mountain, hilly and terai explains the changes in precipitation pattern over last 20 years that has been in decreasing trend.

According to the test, there is trend in the series of rainfall data of Rukum from 1984 to 2012. The trend of Average precipitation is decreasing by 0.443mm Sen’s Slope every year, which is a sign of climate variability.

According to the test, there is trend in the series of rainfall data of Dunnai from 1984 to 2012. The trend of precipitation is decreasing by 1.254mm Sen’s Slope every year, which is sign of climate variability.

According to the test, there is trend in the series of rainfall data of Bardiya from 1984 to 2012. The trend of precipitation is decreasing by 1.417mm Sen’s Slope every year, which is sign of climate variability. 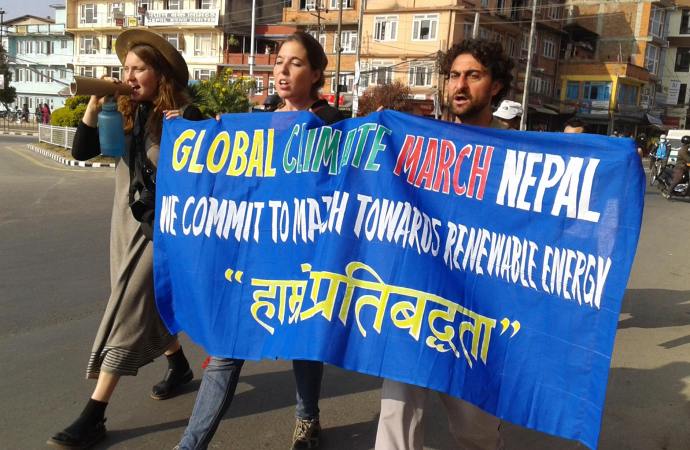 According to Shrestha et al.(2011), the rise in temperature was greater at the higher altitudes and increasing in temperature were more pronounced in the winter. It indicated that the warming was more observed in the higher altitude as compared to Terai belts. Either directly or indirectly, the impacts of Climate Change affect human health. In Nepal, every year, many people die and thousands become homeless and suffer from various diseases and injuries due to sudden occurrence of disasters and epidemic diseases.  In a recent 2009 epidemic of diarrhea and cholera in mid-western Nepal more than 200 people lost their lives due to warm climate.  Drought, intense rainfall and flooding can also contribute to epidemics of waterborne infectious diseases

Probably in LCD’s country like Nepal,  it will be difficult in terms of finance to deal with climate change effects for adaptation and mitigation in future. LCD’s will not be able to afford the cost to minimize the health effects in future.

A recent Harvard report highlights that phasing out fossil fuels and replacing them with renewable energy could save millions of dollars in health costs which is most relevant way to protect many lives from disaster and vulnerability. For example among the findings were that wind farms alone, built near Cincinnati and Chicago produced $210 million in annual health benefits.

These impacts  in addition with national instability makes Nepal more vulnerable to Climate change. It is a topic of priority in Nepal. Politicians are not aware about it which makes it less concerned issue. Even the homework for Conference of Parties  (COP) are done just month before conference.  It lacks enough preparation in terms of Climate Change in Nepal.

Lack of document and background information made it difficult to prepare INDC. But we are in process of research on the points mentioned in INDC to prepare NDC ” Dhakal Says

The INDC does not currently have strategies and plans in detail however the ideas have been pitched as to what Nepal is interested to do and how it plans to do it either through domestic means or international support. “The details will be mentioned in the low carbon economic development strategy” says Manandhar.

Manandhar and Dhakal as part of drafting team emphasizes their satisfaction in mentioned planed. “I think the document is ok at the moment, not to be bias as have been a member of the drafting team but the document pitches ideas as to what Nepal wants to do.” Manandhar says.

In addition, the document encompasses the idea of both adaptation a mitigation issues in Nepal. With very less information and data, this is best what the team could take out as plan. “Lack of document and background information made it difficult. We did what could have done with available information and capacity. ” Dhakal Says.

Further, Manandhar explains that there does not need to be a very in-depth scientific base to set a targeted year, because one can have an ambitious vision or target. With the right amount of financial resources in place Nepal can deliver. Moreover, Nepal does emit much so, its emissions can be tackled if it takes up low carbon development pathways.

The idea of the INDC- is to pitch Nepal’s intentions to contribute to either to adapt to climate change and mitigate potential GHG emissions as relevant. To implement the INDCs, public entities, private sector, bilateral agencies, multilateral agencies, development partners, CSOs, financial institutions will also play a critical role to pave Nepal’s development in line with low carbon pathways. Hopefully, INDC focuses on sectors that are having adverse impact of climate change in Nepal that mentions its adaptation and mitigation plans.  These document and plans will address the issues and impacts of climate change in tourism, agriculture, water, health, energy.