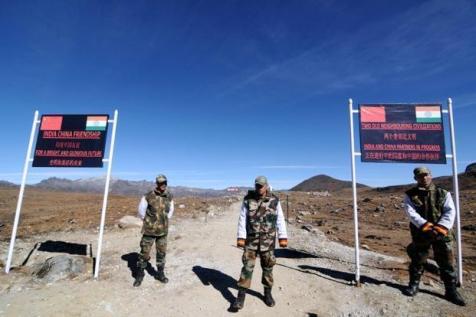 Despite China’s threats of its patience wearing thin, the Indian Army is confident that no battle will be fought along the eastern front. Photo: AFP

In the last few weeks, spokesman of Government of China have been issuing several statements and making observations against India that sound like a war cry. 1962 war between India and China was mentioned, as a reminder to India of the happenings then, which virtually amounts to a warning that events of 1962 could be repeated in 2017 too.

Many in the world, particularly in Asian countries, are not surprised at the belligerent attitude of China towards India at the present moment since several Asian countries themselves have experienced China’s hostile attitude in recent times.  China’s conflict with neighbors about the South China Sea, Senkaku Island are well known. Neighboring countries now have developed a sense of fear and apprehension about China’s attitude towards them and its long term intentions. They think what India faces today in its relation to China; they will face tomorrow.

Ever since China forcefully occupied Tibet, it developed courage that it can do anything and get away with it, as China thinks the world opinion is always impotent and all countries are self-centered. China seems to believe that might is right and aggressive posture, and militant approaches can make it an unquestioned super power in the world.

World observers think that China has been showing the aggressive attitude towards its neighbors, mainly to browbeat them and make them fall in line and accept China’s unquestioned leadership.  This has happened in the case of Pakistan (though China has adopted a different strategy about Pakistan) but will it happen about other countries in Asia?

Observers believe that China will not go for big war with India or any other Asian country immediately, in spite of it veiled threats since its economy and its strength is dependent on trade across the world. But, China would strive to ensure that it would remain prominent in the scene and feared in Asia to psychologically prepare the neighboring countries to accept China’s claimed superiority.

China thinks that it has made USA and West European countries as dependent on China because of massive investments that have been made in China, as China is dependent on Europe and Western countries due to the market outlet and technology support that China needs.

China has concluded that because of such inter dependence, USA, and West European countries cannot afford to take any offensive actions against China in the present circumstances, even if China would involve itself in serious conflict with Asian countries like India and Japan. China appears to be of the view that this current dependence of USA and West European countries on China give it enough muscle power to exploit the conditions in its favor.

There is no doubt in anybody’s mind that China has definite expansionist plans and it will use its economic and military muscle power to reach its objectives of expanding its territories, shake the confidence of the neighboring countries by browbeating them and in the process dominate Asia.

As China has chosen India as the immediate target in its expansionist plans and strategies, India now faces a difficult scenario. India is wondering whether it should appease China and buy peace or confront China and force peace. With 30% of the population in India remaining below the poverty line and with an extremely urgent need to grow its economy and industry, India would not want to divest its energy and resources in conflict with China.

But, if China has alternative plans and wants to continue to have friction with India as a part of its long term expansionist strategies, then India will have little option than to fight back, with whatever consequences. With two hostile neighbors of China and Pakistan, peace in India has been disturbed already.

India certainly would expect US and West European countries to exert pressure on China to make it desist from its aggressive postures. It remains to be seen whether they will sacrifice India’s interests at the cost of their investments in China.  China calculates that US and West European countries would remain self-centered and would not go beyond providing lip support to India that would enable China to have its way.

The world is watching, and particularly other Asian countries are waiting with high anxiety and apprehensions on China’s next move. They are keen to know India’s strategies and action plans in dealing with China at this critical time. Certainly, they think that India should succeed.