China contributes to doubts about Pakistani crackdown on militants 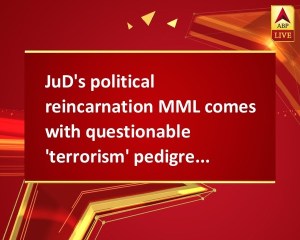 China, at the behest of Pakistan, has for the second time this year prevented the United Nations from listing a prominent Pakistani militant as a globally designated terrorist. China’s protection of Masood Azhar, who is believed to have close ties to Pakistani intelligence and the military, comes days after another militant group, whose leader is under house arrest in Pakistan, announced the formation of a political party.

The two developments cast doubt on the sincerity of Pakistan’s crackdown on militants a day after a suicide bomber killed 15 people when he rammed a motorcycle into a military truck in Quetta, the capital of Balochistan. Balochistan, a troubled province in which the military has supported religious militants an anti-dote to nationalist insurgents, has suffered a series of devastating attacks in the last year.

Taken together, the developments are unlikely to help Pakistan as the Trump administration weighs a tougher approach towards the South Asian country as part of deliberations about how to proceed in Afghanistan where US troops are fighting the Pakistani-backed Taliban.

US National Security Adviser Gen H.R. McMaster warned a week before the Chinese veto and the announcement of the new party, Milli Muslim League (MML), by Jamaat ud-Dawa (JuD), a charity that is widely viewed as a front for Lashkar-e-Taibe (LeT), a group designated as terrorist by the UN, that President Donald Trump wanted Pakistan to change its ‘paradoxical’ policy of supporting the militants.

“The president has also made clear that we need to see a change in behaviour of those in the region, which includes those who are providing safe haven and support bases for the Taliban, Haqqani Network and others,” Mr McMaster said.

Mr. McMaster said that the US wanted “to really see a change in and a reduction of their support for these groups…. They have fought very hard against these groups, but they’ve done so really only selectively,” he added.

Pakistan’s military and intelligence have used militant groups to maintain influence in Afghanistan and to support protests as well as an insurgency in Indian-administered Kashmir. China’s repeated veto of a UN designation of Mr. Azhar, whose group, Jaish-e-Mohammed, has been proscribed by the international body as well as Pakistan, is not only bowing to Pakistani wishes but also a way of keeping India on its toes at a time of heightened Chinese-Indian tension.

Mr. Azhar, a fighter in the anti-Soviet jihad in Afghanistan and an Islamic scholar who graduated from a Deobandi madrassah, Darul Uloom Islamia Binori Town in Karachi, the alma mater of numerous Pakistani militants, is believed to have been responsible for an attack last year on India’s Pathankot Air Force Station. The militants, dressed in Indian military uniforms fought a 14-hour battle against Indian security forces that only ended when the last attacker was killed.

Mr. Azhar, a portly bespectacled son of a Bahawalpur religious studies teacher and author of a four-volume treatise on jihad as well as books with titles like Forty Diseases of the Jews, was briefly detained after the attack and has since gone underground.

Freed from Indian prison in 1999 in exchange for the release of passengers of a hijacked Indian Airlines flight, Mr. Azhar is also believed to be responsible for an attack in 2001 on the Indian parliament in New Delhi that brought Pakistan and India to the brink of war. JeM despite being banned continues to publicly raise funds and recruit fighters in mosques.

JuD sources said the charity’s transition to a political party was in part designed to stop cadres from joining the Islamic State (IS). They said some 500 JuD activists had left the group to join more militant organizations, including IS. They said the defections often occurred after the Pakistani military launched operations against militants in areas like South Waziristan.

Pakistan listed LeT as a terrorist organization in 2002, but has only put JuD “under observation.” Pakistan’s media regulator in 2015 banned all coverage of the group’s humanitarian activities by the country’s news media.

JuD’s head, Muhammad Hafez Saeed, a UN and US-designated terrorist and one of the world’s most wanted men, has been under house arrest in Pakistan since early this year. Mr. Saeed is believed to be among others responsible for the 2008 attacks on 12 targets in Mumbai, including the Taj Mahal Hotel, a train station, a café and a Jewish centre. Some 164 people were killed and more than 300 wounded. The US government has a bounty of $10 million on Mr. Saeed who was once a LeT leader. He has since disassociated himself from the group and denied any link between JuD and LeT.

“What role (Saeed) will play in the Milli Muslim League or in Pakistan’s ongoing politics will be seen after Allah ensures his release. (Once he is released) we will meet him and ask him what role he would like to play. He is the leader of Pakistan,” MML leader Saifullah Khalid told a news conference. Mr. Khalid added that Mr. Saeed’s release was high on the MML’s agenda.

Mr. Saeed was not present at the conference, which was attended by Yahya Mujahid, a close aide of his, who is also subject to UN terrorism sanctions.

Treating men like Mr. Azhar and Mr. Saeed with kid gloves is unlikely to earn Pakistan any goodwill in Mr. Trump’s Washington. China’s protection of Mr. Azhar, moreover, undermines its sincerity in claiming that it is cracking down on militancy despite its harsh policy in the restive province of Xinjiang. If anything, it could put Beijing in Mr. Trump’s crosshairs too.