He describes sufferings of Kachin Christians, likens goal of peace to situation on Korean Peninsula at forum in Seoul 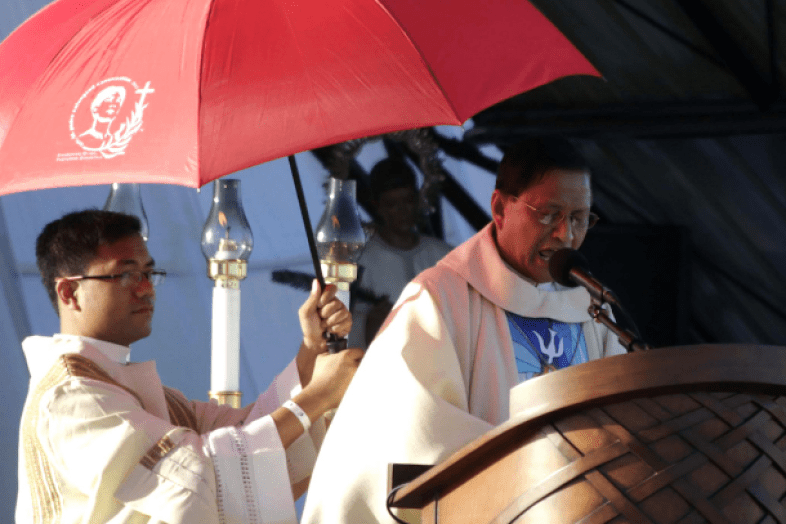 Myanmar’s military is still persecuting ethnic Kachin, the predominant Christian group in a conflict-torn part of the country, as well as Rohingya Muslims, Cardinal Charles Maung Bo of Yangon has said.

Speaking at a peace forum in South Korea, Cardinal Bo said the suffering the Rohingya have endured has captured the world’s attention and described their plight as an “appalling scar on the conscience of my country.” Yet other targeted groups are being overlooked as ethnic fighting rages on in northern Myanmar, with thousands of ethnic minorities having been injured, killed and displaced, he said.

In his speech, Cardinal Bo elaborated on military air strikes in Kachin in February and a major offensive in April that led to more than 7,000 people being displaced.

He said a series of “wars” were being raged in Myanmar against those who espouse religious freedom by forces preaching religious intolerance and hatred.

The cardinal also lamented a raft of violent conflicts due to land ownership disputes and other concerns including human trafficking, environmental degradation, drug abuse by young people, poverty and a lack of protection of basic rights.

“These ‘wars’ continue even though Myanmar has moved over the past eight years through [a series of] reforms and made a fragile transition from a military dictatorship to a fragile democracy,” said the 69-year-old prelate. 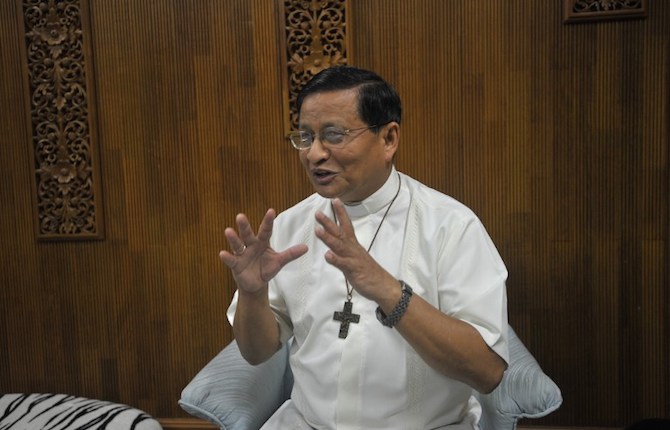 A file image of Cardinal Bo in his office during an interview in Yangon on Jan. 6, 2015, shortly after he was appointed. (Photo by Soe Than Win/AFP)

Fighting has broken out sporadically in the Christian stronghold of Kachin State since the country then known as Burma broke free of its colonial shackles in 1948 by gaining independence from British rule.

The situation deteriorated in 2011 when some 100,000 people were displaced. Most of the state’s 1.7 million Kachins are Christians, including 116,000 Catholics.

Cardinal Bo said the military retains supreme power, especially in its control of three key ministries, while the civilian government has little or no effective control over its activities

This, combined with rising Buddhist nationalism and militancy, has created a dangerous cocktail of hatred and repression that denies ethnic and religious minorities the “peace and human dignity” they deserve, he said.

Cardinal Bo is known as a staunch campaigner for reconciliation in Myanmar, where peace negotiations with ethnic armed militias are ongoing and the Rohingya refugee crisis is still being settled.

He has defended State Counselor Aung San Suu Kyi in her efforts to foster democracy by working with the military, despite calls for her to be stripped of her Nobel prize for staying silent about the persecution of the Rohingya.

Cardinal Bo also talked about establishing permanent peace on the Korean Peninsula amid a recent series of high-profile meetings between the leaders of South Korea, North Korea, the U.S. and China, Pyongyang’s key ally.

He said the dream of nuclear disarmament and denuclearization on the peninsula was now becoming a possibility and urged continued dialogue.

However, true peace can’t be realized when North Koreans are still being stripped of their human rights and basic freedoms, he added.

The U.N. has described leader Kim Jong-un’s repressive policies as crimes against humanity. In North Korea, over 100,000 people remain incarcerated in prison camps, subjected to the most severe forms of torture, slave labor and abuse, in an environment where religious freedom is completely lacking.

“Peace is born from the concept of human dignity,” Cardinal Bo said.

“Every human being, including those who hate us, is made in God’s likeness. Hatred is taught through narratives of hatred. We can also teach every human soul to love,” he added.

He said that while the respective situations in Myanmar and Korea are not exactly analogous, the principle objectives are similar.

The goal in both regions is “to build a lasting, genuine peace,” he said, adding, “human dignity must be defended and injustice and impunity confronted.”