Can Pakistan Reboot Its ‘Belt and Road’ Partnership With China? 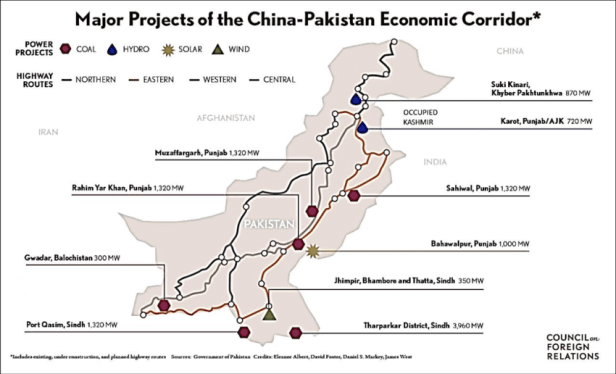 After a series of setbacks, the China-Pakistan Economic Corridor, a multibillion-dollar assortment of infrastructure projects that constitutes the Pakistani component of Beijing’s Belt and Road Initiative, is poised for a resurgence. Or is it? Last month, the Pakistani investigative news site FactFocus published a damning expose about Asim Bajwa, the head of a government body overseeing CPEC. It claims that Bajwa’s family developed an extensive overseas business empire, without declaring many of those assets. The allegations come at an inconvenient time for Islamabad, just as it tries to right CPEC’s ship.

Launched in 2015, CPEC is a logical partnership for China and Pakistan—two close allies keen to cooperate on much-needed infrastructure projects in Pakistan, while contributing to China’s strategic goal of facilitating access to far-flung markets and expanding its global footprint.

However, when Prime Minister Imran Khan and his Pakistan Tehreek-e-Insaf party took control in 2018, the Belt and Road Initiative was coming under increasingly sharp global criticism for a lack of transparency, for burdening host countries with high debts and for questionable investment practices that included excessive use of imported Chinese labor.

Resistance to CPEC emerged even in Pakistan, where public sentiment is strongly pro-China and media outlets are pressured not to criticize the high-stakes initiative. There was particularly sharp opposition from marginalized communities in underdeveloped areas of Sindh and Balochistan provinces. They feared that CPEC projects would displace locals and exploit precious natural resources. Khan had also inherited a serious debt crisis from the previous government, led by the Pakistan Muslim League-Nawaz party, heightening concerns that Pakistan lacked the fiscal capacity to manage Chinese loans.

In the early weeks of its term, in the summer of 2018, Khan’s government telegraphed its own anxieties. In a revealing Financial Times interview, the prime minister’s adviser for investment, Abdul Razak Dawood, blamed the previous administration for negotiating unfairly advantageous terms for Chinese companies. “I think we should put everything on hold for a year so we can get our act together,” he stated.

Razak later claimed he was quoted out of context, and other senior officials insisted that Islamabad was not deferring the project. However, the risks of Chinese investment came into sharper relief in April, when a Pakistani government commission looking into high electricity costs in Pakistan released a report highlighting how Chinese independent power-generating projects were mired in corruption.

That same month, the Washington-based Center for Strategic and International Studies released a report showing that only about a quarter of 122 announced CPEC projects—valued at $20 billion out of nearly $90 billion in total funding—had been completed.

And yet, despite all of the bad press and setbacks, recent domestic and external developments are injecting momentum into CPEC, positioning it for a resurgence. In October 2019, President Arif Alvi issued an ordinance establishing the CPEC Authority, a coordinating body meant to streamline the initiative’s policymaking process. Under the leadership of Bajwa, a recently retired lieutenant general, the CPEC Authority enabled Pakistan’s powerful military to assert more control over CPEC, which it fervently supports. The CPEC Authority may not make its projects more democratic, but by appointing the most highly qualified people to manage it and to make sure it stays on track, it can make CPEC more effective.

Following this institutional reboot, CPEC ramped up its operational plans. China’s ambassador to Pakistan announced a “second phase” of the scheme last fall, which began implementation in January, with a focus on special economic zones and agricultural investments. This summer, the two countries signed $11 billion in new deals, including a $7 billion renovation of Pakistan’s colonial-era railway infrastructure. Pakistan’s recent success in containing its COVID-19 outbreak means that officials will have ample policy bandwidth to build out these projects, and future ones.

Amid the recent indications that CPEC’s fortunes are changing for the better, Pakistan’s government has unsurprisingly sought to sweep a corruption scandal under the rug.

New geopolitical realities provide further fuel for CPEC’s resurgence. A fatal border standoff between China and India in June plunged relations between those two countries to their lowest level in decades, giving added incentive to Beijing and Islamabad to double down on a project bitterly opposed by New Delhi. Indeed, one of the new investments announced this summer entails nearly $4 billion in hydropower projects in Pakistan-administered Kashmir—a region claimed by India.

There are other potential opportunities for expanding CPEC to other countries, though they are still far off. China is reportedly on the verge of signing a strategic partnership with Iran that entails Chinese infrastructure assistance for Tehran. This raises the possibility that Beijing could help develop Iran’s strategic Chabahar port on the Gulf of Oman—a project to which India was committed until stepped-up U.S. sanctions on Iran cast doubt on New Delhi’s role—and possibly link it to the Gwadar port in Pakistan, a linchpin CPEC initiative only 45 miles from Chabahar. Furthermore, Islamabad’s deepening relations with Turkey and Russia could result in those countries contributing to the project. Finally, recently launched Afghan peace talks raise the possibility of an eventual settlement that enables CPEC to expand into a more stable Afghanistan.

Then, there are the allegations against Bajwa. The FactFocus report, written by the Pakistani journalist Ahmad Noorani, alleges that Bajwa’s family oversees a business empire of 99 companies in four countries—including ownership of 133 Papa John’s pizza shops valued at nearly $40 million. It also claims that Bajwa stated in an official declaration in June—just weeks after he was appointed to an additional role as special assistant to Khan for information and broadcasting—that neither he nor his wife hold assets outside Pakistan.

Bajwa has denied the report’s allegations, calling them “baseless,” yet he recently announced his resignation from his position as a special assistant to Khan, while retaining his post at the CPEC Authority. However, in a notable twist, Khan rejected Bajwa’s resignation, and he continues to serve in both roles.

Amid the recent indications that CPEC’s fortunes are changing for the better, Islamabad has unsurprisingly sought to sweep the scandal under the rug. Khan’s government has dismissed the allegations against Bajwa as propaganda and, in the words of a post on the ruling party’s official Twitter account, “a heinous conspiracy against Pakistan.” Indeed, thanks to India’s ever-worsening relations with Pakistan and China, Islamabad can conveniently—and, in the eyes of many Pakistanis, convincingly—declare that these allegations are just an Indian-orchestrated plot to undermine CPEC. Pakistan’s compliant media has helped by featuring little coverage of the allegations.

The government has other reasons to keep the allegations out of the public eye: shielding Pakistan’s military from accountability for its economic empire, and guaranteeing that CPEC continues to be upheld as sacrosanct in a nation where it is rarely criticized publicly.

Given the many well-documented cases of lax accountability and opacity in China’s overseas infrastructure investments, it isn’t a great look for the top official in Pakistan charged with overseeing CPEC investments to be mired in a corruption scandal. The optics are also problematic for Khan and his party, which has a strong anti-graft platform.

With all that’s at stake, Islamabad can scarcely afford to let an ill-timed distraction mushroom into a full-fledged crisis. Pakistani leaders will thus be keen to ensure that a troubled but critical infrastructure initiative maintains its newfound momentum.

Michael Kugelman is deputy director of the Asia Program and senior associate for South Asia at the Woodrow Wilson International Center for Scholars in Washington, D.C.

The article appeared in the World Politics Review on 25 September 2020.