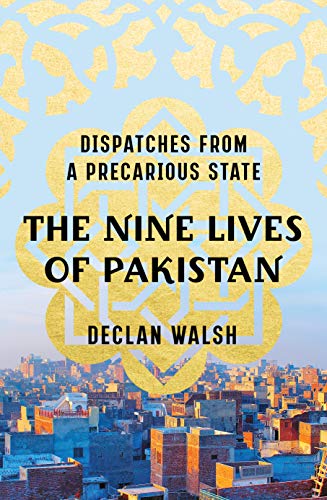 Despite the title of his book, author Declan Walsh actually focuses on eight lives, perhaps leaving the ninth for Pakistan. Five of those lives end violently in what Walsh ultimately describes as “Pakistan’s multi-ringed circus of violence.” Many others, whom he mentions only in passing along the way, serve as collateral damage and also die violently. Two of his subjects die of heart attacks. In the case of one, Anwar Kamal Khan, a Pathan politician on its northwest frontier, we learn that in 2012, the year of his death, a Hellfire missile also took the life of Pakistan Taliban leader Baitullah Mehsud as he lay hooked to a drip on a stringed charpoy bed.  In the case of the other heart attack victim, human rights advocate Asma Jahangir, we get details of her 2018 funeral in Qaddafi Stadium in Lahore. We also learn about the millions of grief-stricken Pakistanis at the September 1948 funeral of another of his subjects, Mohammed Ali Jinnah, who died of cancer and, perhaps frustrated at the direction his creation, Pakistan, was headed 13 months after its partition of from India.

As for the violent deaths, Abdul Rashid Ghazi, a jihadi spokesman in the Red Mosque siege, gets his from Pakistani commandoes on Page 46 of the hardcover edition. Governor Salman Taseer of Punjab province is assassinated by his bodyguard on page 158 (we also get a description of the assassin’s funeral). Sultan Amir Tarar, also known as Colonel Imam, a legendary Pakistani spymaster, is executed by a shot to the head by a masked Taliban fighter on Page 189. Chaudhry Aslam Khan, described as Karachi’s “most famous cop”, dies on Page 217 when a truck carrying 200 kilos of explosives crashes into his vehicle. Finally, Nawab Akbar Shahbaz Khan Bugti, the Sardar or chief of the Bugti tribe in Balochistan, dies on Page 237 in an exchange of gunfire with Pakistani forces.

So the message of the book is that Pakistani is a dangerous place to avoid. Right? No. Walsh wants us to see the bright side.

For example, while he contemplates in May 2013 an order giving him 72 hours to leave Pakistan because of “undesirable activities” after more than nine years there as a foreign correspondent for the New York Times and Guardian newspapers, Walsh writes:

“….I had grown to love Pakistan, too — a country of hidden delights, endearing absurdities, and some of the closest friendships I had ever experienced. My work took me to corners of breath-stopping beauty and plunged me into strange, inspiring, or heart-rending situations. I had made my peace with Pakistan, and I thought Pakistan had made its peace with me.”

Walsh leaves tries unsuccessfully to return. He never discovers exactly what his “undesirable activities” were, although they seem linked to a reporting trip to Quetta, the Balochistan capital that the Pakistan military’s Inter-Services Intelligence bogeymen watched closely. He never quite lets Pakistan go, even when The Times assigns him to Cairo. He goes to Mumbai in India and tries unsuccessfully to visit South Court, Jinnah’s decaying, an abandoned mansion on Malabar Hill.

Amidst all the mayhem that Walsh describes, he insists “….Pakistanis possess many advantages and strengths: a huge number of educated, ambitious, and resourceful young people; an extended family system that provides a social safety net; surprising pockets of tolerance, even in the most conservative quarters; and deep stores of resilience. Above all, Pakistanis are survivors.”

Then, in the next breath, Walsh muses: “Yet a country, like a person, may only have nine lives.” How close Pakistan is to a ninth life, Walsh never tells his reader.

And so we have this book, a cautionary tale about a dangerous part of the world for which Walsh can’t quite shake an unrequited love.