Book Review: The Anarchy: The East India Company, Corporate Violence and the Pillage of an Empire 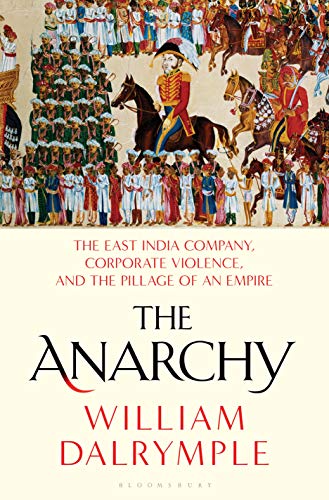 Author William Dalrymple targets the British East India Company for its evil over two centuries in India. In the process, he unmasks a passel of crude, extravagant, feckless, greedy, reprobate rascals — the so-called indigenous rulers over whom the Company trampled to conquer India.

No heroes emerge from Dalrymple’s expansive account that is rich, even overwhelming in detail. He covers two centuries but focuses on the period between 1765 and 1803 when the Company was transformed from a commercial operation to military and totalitarian — to use an appropriate term derived from Sanskrit — juggernaut.

Among the multitude of characters involved in this sordid story are a few British names familiar in general history, Robert Clive of India, Warren Hastings, Lord Cornwallis, and Colonel Arthur Wellesley, who was better known long after he departed India as the Duke of Wellington.

Dalrymple has little right to say for most of these gents other than Hastings, the de facto governor-general of India for 12 years who endured seven years of impeachment for corruption before acquittal. Hastings showed “deep respect” for India and Indians, writes, Dalrymple, as opposed to most other Europeans in India to suck out as much as possible of the subcontinent’s resources and wealth.

Lesser known outside the South Asian subcontinent is Tipu Sultan of Mysore, the Mughul emperors, Alamgir Aurengzeb and Shah Alam II, and a succession of Bengal nawabs who variously were betrayed or manipulated by the Company.

A single local individual, Ghulam Hussain Khan, acclaimed by Dalrymple as “brilliant,” threads his way through the story as an 18th-century historian to whom the author refers countless times, drawing from his Seir Mutaqherin or Review of Modern Times. Dalrymple has used a trove of company documents in Britain and India as well as Persian-language histories, much of which he shares in English translation with the reader. He does this so often, portions of his account seem more assembled than written.

The hardcover book itself is noteworthy for its stunningly lovely glossy reproductions of English and Indian historical art from the period.

Dalrymple has a soft spot for a couple of locals. “The British consistently portrayed Tipu as a savage and fanatical barbarian,” Dalrymple writes, “but he was in truth a connoisseur and an intellectual…” Of course, Tipu, Dalrymple confesses a bit later, had rebels’ “arms, legs, ears, and noses cut off before being hanged” as well as forcibly circumcising captives and converting them to Islam.

Emperor Shah Alam (1728-1806) is contemporary for much of the time Dalrymple covers. “His was…a life marked by kindness, decency, integrity and learning at a time when such qualities were in short supply…he…managed to keep the Mughul flame alive through the worst of the Great Anarchy….”

The Anarchy that Dalrymple mentions and uses for his title is drawn from a remark attributed to Fakir Khair ud-Din Illahabadi, whose Book of Admonition provided the author with the source material and who said of the 18th century “the once peaceful realm of India became the abode of Anarchy.”

With unrestrained gusto, Dalrymple describes almost in play-by-play fashion the battles that littered the Indian landscape for much of the 18th century. They include the well known Plassey victory allowing Clive to seize control for the Company in 1757 of the rich province of Bengal.

The company victory at Buxar in 1764 led in 1765 to Clive forcing Shah Alam to agree to a treaty giving the company financial control of his three richest provinces, an annual windfall Dalrymple estimates amounted up to $325 million in today’s dollars. By 1803, the Company’s army had defeated the Maratha gunners and their French officers, installed Shah Alam as a puppet back on his imitation Peacock Throne in Delhi, and the Company ruled all of India virtually.

In typical fashion, Dalrymple devotes half a dozen pages to the Company’s defeat at Pollidur in 1780 by Haider Ali and his son, Tipu, but a few paragraphs to its significance (Haider could have expelled the Company from much of southern India but failed to pursue his advantage). The reader is not spared the gory details.

“Such as were saved from immediate death,” reads a quote from a British survivor about his fellow troops, “were so crowded together…several were in a state of suffocation, while others from the weight of the dead bodies that had fallen upon them were fixed to the spot and therefore at the mercy of the enemy…Some were trampled under the feet of elephants, camels, and horses. Those who were stripped of their clothing lay exposed to the scorching sun, without water and died a lingering and miserable death, becoming prey to ravenous wild animals.”

Or when Ghulam Qadir, a psychopath who had been raised as an orphan by the emperor, ordered a minion to blind Shah Alam:
“With his Afghan knife….Qandahari Khan first cut one of Shah Alam’s eyes out of its socket; then, the other eye was wrenched out…Shah Alam flopped on the ground like a chicken with its neck cut.”

A few pages on, Ghulam Qadir gets his just dessert. Captured by an ally of the emperor, he is hung in a cage, his ears, nose, tongue, and upper lip cut off, his eyes scooped out, then his hands cut off, followed by his genitals and head.

Dalrymple out-grosses himself with the description of Ahmad Shah Durrani, the Afghan invader of India, dying of leprosy with “maggots….dropping from the upper part of his putrefying nose into his mouth and food as he ate.”

Dalrymple pretty much loses interest once the Company gains full control. “This book does not aim to provide a complete history of the East India Company,” he writes. He skips past one mention of Hong Kong, which the East India Company seized after the opium wars in China. A few sentences record the 1857 uprising of Indian soldiers that led to the British government taking India from the Company and establishing the Raj that lasted until Indian independence in 1947.

The author makes passing reference to the fact that the struggle for American independence was underway for much of the period about which he writes. He notes that It was British East India Company tea that patriots dumped into Boston harbor in 1773. American colonists were so grateful that the Mysore sultans tied up British forces that might have been deployed in America, they named a warship the Hyder Ali. Lord Cornwallis provides a connection, having surrendered to George Washington at Yorktown in 1781, an event confirming American independence, and turning up in 1786 in India as governor-general, taking Tipu Sultan’s surrender in 1792.

That reference raises a question that may someday deserve closer examination — Why were American colonists successful in driving off their British overlords. At the same time, Indian aristocracy and the masses over whom they ruled were unable to rid themselves of the British East India Company and the British Raj for another century?