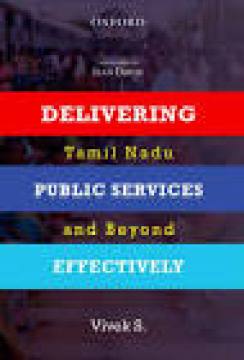 The author starts the book by tracing a personal journey. In 2003, close to a decade before starting a Ph.D. at Syracuse University, where he wrote the thesis on which the book is based, Vivek traveled to Hirapur, in Sheopur district, Madhya Pradesh state (central India), with the purpose of investigating reports of starvation deaths. These deaths had taken place in the backdrop of a drought that was affecting large parts of the country. The author realized that while providing key services was ‘well within the state government’s financial capacity’ public services were not a political priority in Madhya Pradesh (p.3). This set him on a quest to understand the nature of politics in Tamil Nadu, his home state, where service provisioning was substantially different. Curiosity about this difference increased further when the author joined the ‘right to food campaign, India’ (RTFC hereafter). In 2001, the RTFC had filed a civil writ petition in the Supreme Court of India (case title – People’s Union for Civil Liberties v. Union of India and others, CWP 196/2001). In a significant interim order in 2001, the Supreme Court of India had ‘made school feeding a legal right of children in public schools and had directed all state governments in India to initiate school feeding by June 2002′ (p.4). The author found that ‘despite the directive from the (Supreme) court, there was continuous resistance from most state governments and school feeding finally materialized in all states only by June 2006.’ In contrast, these services were already ‘provided extensively’ in Tamil Nadu, ‘decades before’ intervention by the Supreme Court (p.4). The book proceeds to answer the question of how services came to acquire significant public priority in Tamil Nadu. As a corollary, one of the author’s key puzzles is how Tamil Nadu developed a strong culture of public action to demand services from the government.

There is a wide literature that aims to explain differences in implementation of social policy in different states in India. In the Introduction, the author somewhat briefly discusses literature from the fields of human development, political economy of development and comparative politics, and highlights that public service provisioning in Tamil Nadu had significant implications for the state’s development indicators, including rates of gender parity in school enrolment, and the proportion of women who access antenatal care. It is highlighted that the primary healthcare system had grown gradually since independence, but the system rapidly expanded after M. G. Ramachandran became the Chief Minister of Tamil Nadu in 1997. The initiatives in healthcare had implications for life expectancy at birth. While the funding for health and education services was partly from the central Government of India (GoI), the administrative effort to implement these programs was entirely ‘local,’ and sharply influenced by state-level politics in Tamil Nadu. Importantly, Vivek notes the administration had an ear to the ground, so when there were protests against the introduction of the targeted version of a subsidised food grain program, ie ‘Targeted’ Public Distribution System (TPDS)’ after a recommendation to this effect from GoI that it be introduced, Tamil Nadu introduced the TPDS but then scrapped it within a week and moved back to a universal PDS. Following this, the government of Tamil Nadu spent a considerable amount of money to cover families that were deemed to be above the poverty line by the GoI (p.6). By doing so, Tamil Nadu became the only state in India that retained a universal system for subsidized foodgrain provisioning, (i.e., the PDS) when even states like Kerala switched to a targeted PDS in 1997. Importantly, Tamil Nadu continues to retain a universal PDS ten years on.

The First Section of the book presents its most significant contributions where the author discusses contention around service provisioning in Tamil Nadu. Chapters 1 and 2 draw on ethnographic fieldwork in local government offices, and in Erani village (pseudonym) to detail everyday struggles that are closely linked to local level caste politics and Dalit assertion for dignity and equality. As recently as the 1970s, in ‘Erani’ for instance, ‘upper caste’ Reddiars objected to Dalits riding bicycles. The author catalogs episodes of ‘decentralised collective action’ in Erani, highlighting that demands for access to education, water, and street lighting in Dalit hamlets, have been closely entwined with and are part of the resistance against caste oppression. The author relies on extensive interviews with local activists, particularly Dalit activists and those associated with the mainstream left, to understand the cumulative nature of collective action and the manner in which access to services has been assertively demanded over a period in the villages that have been studied. This claim making relies on a ‘strategic use of public attention’ (p.55) to demand services from the government. The process of demanding services often involved the use of ‘humour, art, music, visual representation,’ and ‘the creative use of social tensions’ – for instance by burning puppets, breaking pots or by tonsuring heads in public.

In Chapters 3 and 4, the author goes further back in time to discuss how the Dravidian, Dalit, Communist and Women’s movements in the state contributed to the development of a local level ‘culture of assertion’ from the late nineteenth century to the 2000s. The roots of the now commonly visible ‘decentralised collective action’ cataloged in the previous chapters, can be traced to a long history of social reform movements in the state. Importantly, the author highlights that the most significant change that eroded the dominance of narrow elite groups, in particular, the Brahmins, has been the democratization of political institutions, along with the existence of strong social reform movements. The process of institutional democratization started with the introduction of district-level elections in 1892 (p.98). Despite the flawed electoral system under the Colonial government including limited electoral franchise, the election nonetheless created space for Backward Caste leaders to challenge the Brahmin-dominated Congress. This electoral contest later contributed to the formation of the anti-Brahmin coalition, the Social Justice Liberation Front, or the Justice Party in 1916, which later came to be called the Dravidar Kazhagam (DK). The Dravidian movement that developed, strengthened substantially under the astute leadership of E. V. R. Periyar. Strategically, the movement raised uncomfortable questions in public, encouraging individuals and groups to question authority and ridicule symbols of power (p.87-88). Despite subsequent political splits, with the Dravidar Munnetra Kazhagam (DMK) being formed by breaking away from the DK in 1949 and the AIADMK breaking away from the DMK in 1972, the roots of social reform politics centered around claiming rights remained strong. Importantly, because of the deep roots of social reform movements, it became an inherent part of mainstream political practice in the state to make efforts to provide public amenities as well as healthcare and education of reasonable quality. These came to be expected of the public and leaders like M. G. Ramachandran, on their part also expanded services as a way of sustaining political support.

In Section Two, the author presents an admittedly tentative comparative discussion on the historical roots of public service provisioning in other states in India. The author makes the case that social reform movements in Northern India were not as radical as comparable movements in Tamil Nadu and Kerala, where a much more fundamental social overhaul was demanded. The author makes a useful point that in Tamil Nadu and Kerala social reform movements ‘dominated for decades and were able to influence the agenda of the movements that followed’ including mainstream party politics after independence (p.174-175). The above had a direct implication on public provisioning of education and health services in these states. In comparison, a combination of social reform movements and mainstream party politics ‘elsewhere’, such as in ‘‘the North East’, Bengal, Maharashtra and Punjab’ (p.174), Kashmir (p.208) and Bihar (p.212-213) faced intense contests and tended not to unsettle the societal status quo in a sustained manner with attendant implications for the quality of service provisioning by the state. While this analytical point made by the author is useful, at this point in the book the reader is left wondering if the author has set himself an impossible task by choosing a canvas that is far too wide and diverse. A more focused discussion here might have been considered.

This said, the book is a rewarding read and is an important contribution towards helping us understand key questions on the politics of development in India.