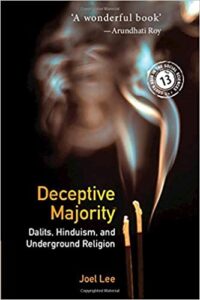 What is deceptive in Joel Lee’s account is the commonly accepted belief that India’s untouchables, the Dalits, are Hindus by religion. Lee, a professor of anthropology at Willians College in Massachusetts, contends after a study principally in Lucknow but elsewhere as well that many if not most untouchables practice what he terms as an underground religion that includes elements of Islam.

British colonial census takers at the beginning of the 20th century, writes Lee, often took for granted that the Dalits they were questioning were Hindu without bothering to ask them to confirm their religious belief. That practice has carried over to independent India, Lee claims.

The significance of counting untouchables as Hindu rests in the claims of Hindus on the right politically that Dalits are part of the 80 percent Hindu majority that make India a Hindu nation and provide the foundation for the current Hindutva campaign supported by the ruling BJP party of Prime Minister Narendra Modi.

Long before Modi and a renewed Hindutva movement, Hindus worried that Muslims would overtake them in numbers by converting untouchables to Islam.

“If all untouchable castes become Muslim,” Lee quotes a Swami Shraddhanand as warning in the mid-1920s, “then the Muslim party will become equal to that of the Hindus.” The ascetic swami, also known as Lala Munshi Ram, was a celebrated advocate of the shuddhi or purification movement of the Arya Samaj organization seeking to convert non-Hindus, including untouchables, to Hinduism.

The Swami was assassinated by a Muslim gunman in 1926. Another victim of assassination, this time by a Hindu gunman, Mohandas Gandhi, did not care for Shraddhanand (he felt the Swami and the movement too aggressive) but was as an active advocate of Hindu India. Lee frequently in his account (he devotes a chapter to Gandhi) refers to a Gandhi remark in response to the insistence by B.J. Ambedkar, an equally fervent advocate for Dalits, of which he was one, that his people were not necessarily Hindu by religion.

“You cannot escape the situation that you are Hindus,” Lee quotes Gandhi as saying to Ambedkar, “in spite of your statement to the contrary.”

It is an unfortunate omission in his study that Lee does not provide some numerical context to the controversy over who is a Hindu and how many of them are there.

Figures about Indias’s population tend to vary. According to Indian census figures, there are about 200 million Dalits in a population that is now approaching 1.4 billion on the way to overtaking China as the world’s most populous country. Of that 1.4 billion, approximately 80 percent are designated as Hindu. There also are 400 million so-called Scheduled and Tribal Castes, assuming that Dalits are counted as part of that group. There are about 200 million Indian Muslims, a figure that may include some untouchables. There are about 28 million Christians, including many untouchables who embraced Christianity as a means to rise above their humble status, about 20 million Sikhs and 10 million Buddhists.

If many members of the Scheduled and Tribal Castes renounced Hinduism for Christianity or Islam, they might endanger a Hindu majority. That is an unlikely prospect. The Indian constitution stipulates that only Hindus can be members of a Scheduled caste, so an untouchable who converts to another religion loses access to privileges, such as discounted school fees and scholarships. Lee notes that many untouchables register as Hindu only to be eligible for these benefits.

The subject of untouchability is murky as well as dizzying because of many different names for lower castes. There are depressed classes and Schedules Castes. There are Chamars, Chuhra or Mazhabi, Dalits, Dom or Domar, Mehtar, Rahtia and many more. Gandhi famously dubbed untouchables as Harijans, a name objectionable to many untouchables. When he later declared himself to be an untouchable, he called himself Banghi.

Lee worked in Lucknow in 2011 among the bastis, or shantytown, of a low-caste crowd he calls simply “sanitation labor castes,” because that is what they did, sweeping and cleaning toilets, among other lowly tasks. But even they embraced identification as Lal Begis, worshippers of an apparent mythical saint, Lal Beg, from a Sufi (thus Islamic) tradition, who wielded a Glorified Broom of peacock feathers.

Lee found the Lal Begis did no regard themselves as Hindu, although census takers routinely marked them as such without asking them about their religious preference.  They took Muslim names and customs such as burying their dead (Hindus cremate) and using enclosed latrines (Hindus use what they call the jungle, the outdoors).  Lee stood with them as they lined up carrying cocks to be slaughtered ritually by Muslim practitioners as part of a Lal Begi feast day. He returned to Lucknow seven years later and found that while many of the sanitation labor caste had adopted Hindus names, they still lined up to have their roosters slaughtered by Muslims on their feast day. He visits New Delhi and discovers signs that Lal Bei worship persists there. A “forty-something” Gulab Singh tells him in the census, “we write Hindu religion…because in the government record…we are counted as Hindus. But that’s not what our heart feels. We don’t believe that.”

While Lee devotes considerable space to efforts by Gandhi, Arya Samaj and others to bring untouchables into the Hindu fold, he makes it clear their efforts have fallen short. Underground religion persists. What Lee does not show is how untouchable so-called underground belief is sufficient in numbers to threaten the Hindu majority in India.

However, Lee’s work is a monument to the incredible diversity of India. For that alone, it is worth a read.