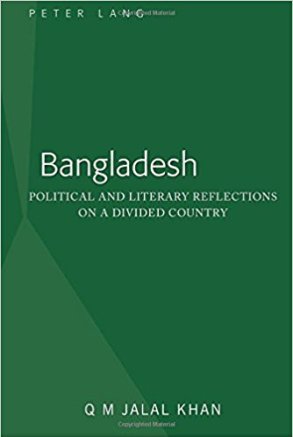 A comment, with particular reference to Bangladesh National Anthem

Congratulations to Dr. Jalal Khan. I greatly appreciate his patience and diligence. I can visualize the amount of painstaking efforts that have gone in collecting a mountain of materials and references for his book, Bangladesh: Political and Literary Reflections on A Divided Country dealing with the day-to-day politics of Bangladesh, particularly from the advent of the Sheikh Hasina administration in January 2009. The book exposes many political, economic and social contradictions that plague our nation, society and people’s lives, as opposed to the ideals and spirits they envisaged while fighting for decades that culminated in the creation of Bangladesh in 1971. The cover is simple, neat and cute. I wish success for the book and hope it achieves wide readership. The wealth of information on Bangladesh’s contemporary politics will serve the book as valuable reference material for researchers.

Those who followed the events of the past decade in Bangladesh will very well testify that Dr. Khan has given a graphic chronology of events and evaluated them in the perspective he understood best. He has not invented anything from his side, nor has he tried to impose his thoughts on the reader. The huge expanse of explanations, including various pros and cons, on each issue, speak for themselves. The book has already received critical acclaims from a number of talented professionals. However, a few detractors complained that the book was highly critical of the Mujib-Hasina regimes, but they could not offer a single instance where the author was wrong or said anything out of context. That the country is divided today by the widest possible crack is not an invention of the writer. Anyone following the India-induced Hasina politics acknowledges it, whether one openly admits it or not. The country is definitely heading the wrong way. In fact, the author deserves praise for stating the facts, however bitter and ugly they be and standing for the truth.

Each chapter in the book deals with a clear-cut national issue that sharply divides the nation, be that “Democracy and Development,” or “Partisan Politics Over the Dead,” or “Secularism in Bangladesh” or even “Taslima Nasreen.” Each issue has been discussed at great length. I would particularly like to share my understanding and conviction about Amar Sonar Bangla, the country’s national anthem. The author has given a detailed explanation why this particular poem of Rabindranath Tagore is unsuitable as Bangladesh’s national anthem.

As Dr. Jalal Khan mentioned, American national anthem was adopted in 1931, after more than one and a half-century of the nation’s birth, the tune traversing 117 years in the process. Australia took nearly a century to decide so. Khan has offered many other examples to assert that a national song can be changed, altered, re-written at any stage of a nation’s history to conform to the spirit and aspirations of its people. I fully agree.

I want to underscore that a national anthem needs to undergo serious scrutiny before it finds its place in the nation’s life for the people to recite with a view to enlivening, as well as reinvigorating the spirit on which the state came into being. For Bangladesh, the spirit is the struggle for freedom, the blood of its martyrs of 1971 and the march forward to prosperity with heads high. These are missing in Amar Sonar Bangla.

Amar Sonar Bangla is an emotional song; it was intended to be so by the poet. It praises Bengal’s routine rural life, environment and a few fruits of the time. Is that all we have in Bangladesh that we need to remind ourselves daily? The last stanza of the poem, though not taken, is offensive to Muslims: তোর চরণেতে দিলেম এই মাথা পেতে, দে গো তোর পায়ের ধুলা, সে যে আমার মাথার মানিক হবে। The tune rhyming like a folk jari gain, with মরি হায়, হায় রে, is appropriate for a village fair, or to make someone fall asleep.

I am not sure how many Bangladeshis, leave along the young students in different institutions who sing it daily, know the origin and implication of the poem. Just because it came from Rabindranath Tagore does not make it automatically sacrosanct. One needs to know how this poem came about. True, we hum and hymn Tagore songs all the time, because few other tunes soothe our ears or stir our feelings than Tagore’s do. However, when it comes to a national anthem, it is a different story. Besides, Tagore’s Sonar Bangla was meant for the whole Bengal, which included almost a half that now lies in India. Bangladesh is an independent country. It should have its own cultural identity, including the national anthem, independent of avoidable links with a foreign country.

In keeping with the longstanding demands of the eastern part of Bengal, which had a Muslim majority, as well as for administrative exigency, the British Viceroy Lord Curzon divided the Bengal Presidency into two provinces in 1905: West Bengal and Orissa with Kolkata as capital; and East Bengal and Assam with Dhaka as capital. The Kolkata based Hindu gentry, particularly the powerful zamindar class, vehemently opposed the division, known as Bongo Vango. They feared the loss of their agricultural hinterlands in East Bengal (In those days, East Bengal provided 80% of the world’s jute requirement). Poet Rabindranath Tagore, a zamindar himself, was in the forefront of anti- Bongo Vango movement. At that point, in 1906, Tagore composed Amar Sonar Bangla identifying Bengal as a mother who could not be split. A weird comparison indeed! In the same token, may I ask the Hindu leaders if they opposed the splitting of Bengal in 1947? Not that I know, perhaps excepting a few like Satyen Bose.

Faced with such stiff opposition, the British annulled the division of Bengal in 1911. To appease the people of East Bengal for their loss, the new Viceroy offered to set up a university and high court in Dhaka. This again faced serious opposition from the Kolkata based Hindu intelligentsia on the implied ground that the influence of Kolkata University would thus be diminished in one hand, and an educated Muslims in the eastern half would adversely affect on the peasantry of their zamindaris on the other. Again, Rabindranath Tagore was in the lead of the movement. He chaired a meeting in Kolkata in 1912 to publicly oppose the Dhaka University.

Thus, Rabindranath Tagore was opposed to the creation of East Bengal and the Dhaka University. What an irony that after nearly seven decades, the leadership of a newly independent Bangladesh had no qualm in choosing its national anthem a song that stood against the very creation of the country! On the other hand, many writers and researchers, both Hindus and Muslims, had shown that Tagore had a sectarian mindset against the Muslims. He was known to be a ruthless zamindar in his estate holdings where Muslims were the majority. Dr. Khan has provided those references.

I am sure if the larger sections of Bangladeshis, who are 90% Muslims, know these facts they will have a second thought in rendering their tongue to the tune of Amar Sonar Bangla again.

This argument has nothing to do with Rabindranath Tagore as a poet, or as a Hindu or an Indian origin. He was a world-recognized great poet, a Nobel Laureate, and pride for Bengal. Tagore’s literary contribution is enormous wealth in the Bengali language. Tagore songs are on everyone’s lips, whether vocalist or not. National spirit and aspirations outweigh personal emotions.

Dr. Jalal Khan has given the fundamental ingredients needed for a national anthem: unity, harmony, inspiration, and motivation, in addition to “glorious and historical spirit of peace, pride, and liberation.” Amar Sonar Bangla has none of these.

If the US can take 155 years, and Australia 94, to decide about their national anthem, it is not late for Bangladesh to give it a fresh thought. I agree with author’s suggestion that once a consensus arrived on the need for a change, the authorities may constitute an Anthem Committee composed of eminent members from various shades of the intelligentsia, but carefully avoiding political or opinionated elements. The committee can decide, taking a national survey if needed, how best to find a befitting poem to serve as the national song. It can also look into the available compositions that can fit the bill with or without linguistic changes. In this context, author’s choice of স্বাধীন বাংলাদেশ…মৃত্যুঞ্জয়ী বাংলাদেশ…(independent Bangladesh… invincible, victorious Bangladesh…), a short but powerful composition by noted Poet Talim Hossain may be considered. It has virtually all the ingredients we seek in a national anthem.