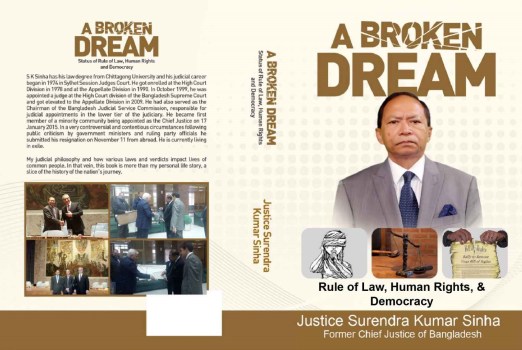 Justice Sinha was born in Moulavibazar district in the northeast Bangladesh where he grew up in a family of six siblings, five brothers and one sister.  His father was a dedicated teacher and a scholar of the Hindu religion. During Bangladesh liberation war in 1971, he experienced the same hardships as most Bangladeshi youths at the time. He pursued a law degree from Sylhet Law College without his father’s consent. His father could not imagine, an ideal teacher’s son could become a lawyer and make a living by lying. He believed the lawyers make a living by lying. From this backdrop Surendra Kumar Sinha rose to become the Chief Justice of the Supreme Court. The book eloquently portrays his life’s journey and the final confrontation with a political furor with the Awami League government in 2017 that led him to exile.

The 1972 constitution of Bangladesh ensured the separation of the judiciary from the executive that suggested the independence of the court from the executive interference. Both civilian and military dictators were opposed to the judicial independence and exerted undue influence on the judicial independence. The judiciary has undergone significant changes in the past four decades with the inclusion of highly skilled individuals, the introduction of technology, challenging the culture of impunity by trying the killers of Bangabandhu Sheikh Mujibur Rahman and the war criminals, to name a few.

Chief Justice Sinha had the opportunity to observe all these changes in the judiciary since 1974 – rising from a practitioner at a lower court to the highest judicial position of Bangladesh, the Chief Justice of the Bangladesh Supreme Court and most importantly, it is the current government that has forced him out of his office is the one that appointed Justice Sinha at this highest judicial position of the country. Given the current autocratic nature of the government they probably expected Justice Sinha, a member of the minority community to tow government line. However, this was not to be and that led to Justice Sinha’s forced resignation from the position of Chief Justice on…and his decision to go into self-exile, first to Australia where his daughter and son-in-law live and currently, to USA.

Justice Sinha’s Book, ‘A Broken Dream’ describes the backdrop of his ‘resignation’ and also makes insightful observations on Bangladesh’s numerous social and political issues including its evolving state of governance.

The beginning of the trouble

After a historic verdict given by Justice Sinha on…that upheld the independence of the judiciary, Sinha was forced to leave the country and resign and exiled by the present government. There were a series of unprecedented events leading to the tension between the executive and the judiciary that led into action against the sitting Chief Justice on September 22, 2014, when the parliament amended the constitution empowering the parliament to impeach the judges of the higher judiciary. The sixteenth amendment deleted the provision of removal of the judges through an influential committee of peers known as the Supreme Judicial Council (SJC). This process was intended to protect the judges from political interference. On May 5, 2016, a special bench in the high court by a majority declared the amendment unconstitutional. Soon after the verdict, the Members of the Parliament blasted the judges and began displaying disrespect to the judiciary. On an appeal by the state, a seven-member bench headed by Chief Justice Sinha on July 3, 2017, unanimously dismissed the appeal upholding the High Court Division’s verdict.

On September 13, 2017, the parliament passed a resolution calling for legal steps to nullify the verdict. The Prime Minister and the other members of the parliament blasted the Chief Justice Sinha for going against the parliament and accused him of misconduct and corruption. While he was confined to his residence, the lawyers and judges were prevented from visiting him. Various ministers suggested he leave the country on medical leave. Finally, he was compelled to leave the country on October 14, 2017.
During his departure, the Chief Justice made bold statements to the press, he was neither unwell nor sought a medical leave.

Facing intimidation and threats to his family from the Directorate General of the Forces Intelligence (DGFI), Sinha submitted his resignation on 11th November 2017. He sent a letter of resignation while he is vacationing in Australia to President Abdul Hamid which has been confirmed. The same President announced Chief Justice Surendra Kumar Sinha is facing 11 charges, including money laundering and corruption, a day after he left the country for Australia Oct 13, 2017. In a public statement just before his departure for Australia, the Chief Justice said he is ‘not sick,’ but that he is leaving because he is ‘embarrassed’ and is concerned over the independence of the judiciary.

The opposition leaders of the nation believe with some justification that the Chief Justice was forced out of the office owing to his Observations in a deliberation earlier last month.

The Chief Justice of the country Mr. Surendra Kumar Sinha recently wrote an opinion: “Parliamentary democracy is immature and to attain its maturity, there is a necessity of practicing parliamentary democracy continuing for 4/5 terms!”. He was implying on the issue of the 154 unelected parliamentary members and thereby reflecting on the legitimacy of the present government. The political scientists believe, having an election under such management could not be fair.

Whatever semblance of independence of the judiciary was there in Bangladesh, it has been eroded by ejecting the Chief Justice of the supreme court by sending him on a forced vacation at a crucial time. One senior minister said that the sitting judges are “immature.” Another said that the Chief Justice should be sent to a lunatic asylum. A third one said that the judgment was perhaps written by another English knowing editor or by the ISI of Pakistan. Another called the Chief Justice a Razakar who helped the then the Pakistani government while Bangladeshis were in the liberation struggle

The present government has neutralized all other organs of the state; military, police, civil servants and all administrations to the lowest cadres at the local level. Election Commission has been made into a tool for implementation of the wishes of the government. If the next election is not conducted in a fair and secure atmosphere, Bangladesh will be lost in the darkness of authoritarianism for an unforeseeable future. Ordinary Bangladeshi citizens are just riders on a rudderless vessel. With the Chief Justice Sinha out of the way, there is not a single individual that can stand up to the most influential person in Bangladesh; the 35th dominant female in the world according to Forbes magazine. This award has emboldened her, and she became a source of pride for her party stalwarts.

The book portrays the struggle of the judiciary to protect its independence in contrast to the erosion of values in judicial service and political corruption.

Sinha’s critics in the government accused him of treason claiming that by giving a verdict that directly challenged the locus standi of the government, he apparently, attempted to topple the government by hatching a conspiracy. Sinha states that an Army Officer constantly kept threatening him and his family. Even though the government was successful in overthrowing him; he says, they were unable to belittle him. The government set a dangerous precedent which could have far-reaching consequences.

With the departure of Sinha the Supreme Court has been virtually turned into a department under the Ministry of Law. Once an institution is broken, it is difficult to bring it back to its original position.

‘Broken Dream’ is a must read for those that are interested in studying the emerging pattern of politics of Bangladesh and how a number of factors, both internal and external, are contributing to its march towards authoritarianism.