Blinken in India: Focusing on China 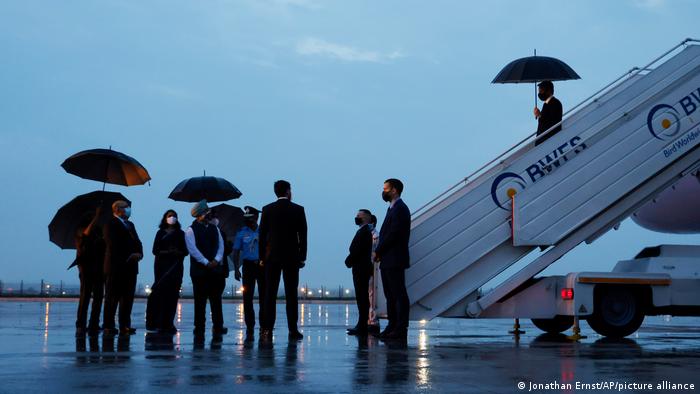 US Secretary of state Antony Blinken arrived in New Delhi last week on a two day visit to India. This visit took place just two days after his deputy Wendy Sherman arrived in China to discuss bilateral relations between China and the US. During the visit Blinken had meetings with Indian External Affairs Minister Subrahmanyam Jaishankar, National Security adviser Ajit Doval and Prime Minister Narendra Modi.

Just prior to the bilateral meeting Jaishankar had emphasised that “our interests are shared, our concerns are similar, and our convergence strong”. He further said that Blinken’s visit “is an opportunity to continue to the high level bilateral dialogue and bolster the India-US global strategic partnership”. New Delhi and Washington definitely have a clear convergence on two issues — China and Afghanistan but priorities are different from the two sides.

From the US side, the purpose of the visit was to expand the strong and growing bilateral partnership between India and the US. The US embassy in New Delhi shared with press reporters a fact sheet immediately after Blinken arrived in New Delhi which says, “India is a leading global power and a key US partner in the Indo-Pacific and beyond’. A spokesperson of the Indian External Affairs Ministry reciprocated the sentiment saying “A partnership anchored in shared values, mutual interests and goodwill”.

Despite such expressions of goodwill from both sides, Dean Thompson, the Acting US Assistant Secretary of State told Press reporters prior to Bliken’s arrival in New Delhi that the Secretary of State would raise issues of human rights and democracy with Indian officials during the visit.

Indeed, Blinken met a group of civil society leaders at a New Delhi hotel and said, “Of course, both our democracies are works in progress. As friends we talk about that”. Despite the apparent US concerns for human right violations, discriminations against religious minorities and curtailment of press freedom, Bliken’s visit seems have ended in a very cordial atmosphere.

But Blinken’s statement came on a day when the Chief Minister of Assam state Hemnta Biswas Sharma who belongs to Prime Minister Narendra Modi’s Hindu supremacist Party BJP, made strong statements against beef consumption in the neighbouring Christian majority state of Mizoram. Sharma even resorted to gunfights to force Mizoram to stop beef consumption.

Human rights and minority groups continue to highlight that India under the current Narendra Modi’s Hindu Supremacist Party BJP systematically not only discriminates but also uses violence against Muslims, stigmatise critics of the government while curtailing press freedom.

While discussing the rise of brutality and violence in Indian public life under Modi’s Hindutva government, Robert Blom Hansen, Professor of Anthropology at Stanford University termed the Modi government a “regime of low intensity terror”.

In fact, the persecution of Muslims in India now has reached such a stage where in early July this year photographs of more than 80 Indian Muslim women including Muslim female activists, students, journalists had been uploaded on an app called “Sulli Deal”. The platform is the creation of a group of supporters of Narendra Modi’s BJP and offered an opportunity to claim a “sulli”, a derogatory term used for Muslim women, to keep her in the harem. Since the app was discovered, no arrest has been made.

If the “greatest democracy’ in the world for the last 245 years, remains a “work in progress” democracy and also the same in the “largest democracy” in the world for the last 74 years, there must be something very seriously flawed in the US espoused type of democracy which under the Biden Administration has taken the shape of a crusade against what the US describes as the “menace of authoritarianism”. According to the News 18, the Chinese Foreign Minister said ” Which country is democratic and which country is authoritarian is not defined by a few countries”.

In fact, the US remains the principal subverter of democracy around the world since the very beginning of 1950s, in particular in the Middle-East and South America. The US also remains the ardent defender and sustainer of the most autocratic and despotic Arab regimes in the Middle East and in other parts of the world.

Closely following Blinken’s deputy Wendy Sherman’s visit to China, his arrival in New Delhi remains primarily focused on China along with Afghanistan. The visit as seen from the Chinese political analysts perspective is to rope in India to contain China and play the “India card”. Blinken’s visit in essence was intended to implement the US strategy to lining up India to lock arms with the US against China’s rising influence in the Asia-Pacific region.

But for India, Afghanistan remains a major concern in view of Washington’s withdrawal from Afghanistan. The US withdrawal has left India’s investment made over the last twenty years in Afghanistan in jeopardy and all military training, support and armaments provided to the Afghan army have come to naught. While the US may help India to shore up anti-Taliban forces in Afghanistan, but it is not central to the US-India relations.

Gazala Wahab, an Indian journalist in an article in the WIRE opined that ‘Two Indian beliefs – of goodwill from Afghan people and Taliban inspired terrorism coming to Kashmir — are both untenable”.

This Afghan game India will have to play by itself now if it wishes to do so. The situation in Afghanistan looks increasingly bleak for the India-friendly American client regime of Ashraf Ghani. In fact, the Ghani regime in Kabul looks not only frail but also terminal. The Taliban now controls some 85 per cent of the country’s territory including some critical border checkpoints. As Afghan soldiers continue to surrender to the Taliban, that will seal the fate of the US client regime in Kabul.

To put the US alliance with India in the context of India’s economic strength, it is to be noted that according to the World Bank (WB) per capita income in India stood at US$2,152 in 2019 which is equivalent to 16 per cent of the world’s average. During the same year per capita income in the US was US$65,298.

Furthermore, about 60 per cent of India’s 1.3 billion people live on US$3.10 a day, the World Bank median poverty line. And 21 per cent or more than 250 million people survive on less than US$2.0 a day. India’s top 1 per cent of the population held 73 per cent of the wealth in 2017 while 670 million people comprising country’s poorest half saw their wealth increase by 1 per cent during the same year. Poverty and squalor in India are so widespread that according to the WHO and the UNICEF, India is the No.1 country in the world for open defecation, with over 344 million people without any access to toilets as estimated in 2017.

Yet, India considers itself a rising global power (a belief also shared by the US) and the regional hegemon because of its disproportionate military power relative to its economic strength. In fact, it behaves that way especially with its smaller neighbours as reflected in its bullying behaviour towards them.

According to the Stockholm International Peace Research Institute (SIPRI) military expenditure of India as a percentage of GDP was 2.4 per cent in 2019 and that figure was 1.9 per cent for China and 3.4 per cent for the US during the same year. As of 2020, the US has authorised over US$20 billion of armament sales to India. Also, India and the US are involved in joint production and development of military equipment. Such a high level of military expenditures as a proportion of GDP by a poor country like India is a sure recipe for the perpetuation of widespread poverty and squalor in the country.

The US efforts to closely align with India not surprisingly remains anchored in the mutually perceived threat from China despite India’s lack of capability to play any decisive military role against China.

However, in a show of loyalty to the US in its China containment policy, the Modi government has taken a series of anti-China measures including banning dozens of Chinese apps like WeChat and TikTok. Those measures enabled India to move closer to QUAD which China considers as the future “Asian NATO’ despite Blinken rejecting the idea and said “QUAD is not a military alliance”.

Neither Blinken nor Jaishankar ever mentioned China in their discussions in New Delhi but it was clearly evident that the containment of China was the principal shared interest of the two countries. The US is practically pushing a very poor country to confront China at a massive cost to India itself and using the country to sell billions of dollars of armament to confront China. All these are happening at a time when the US is also economically in a declining phase.

In recent times political slogans like “Make America Great Again” and “America is back” reflect a deep seated feeling that America is losing its place in the world and China is perceived to be the reason for it. Chinas has now become an “imagined enemy’ as Chinese Vice Foreign Minister Xie Feng told Wendy Sherman, Blinken’s deputy during her recent visit to China.

Despite Wendy Sherman’s conciliatory tone in Tianjin saying the US ” do [es] not seek conflict “, yet she presented a laundry list of Chinese behaviour that the US opposes which contains all purely Chinese domestic issues. No wonder that Chinese Vice Foreign Minister Xie then responded by saying all these issues are China’s business as a sovereign country.

In the Tianjin meeting, China for the first time provided the US with a list of red lines and corrective measures the US needs to take to repair the relationship. Xie further added that China was willing to engage with the US as equals and seek common grounds and urged the US to choose the path of “mutual respect, fair competition and peaceful coexistence”.

Yet, the US paranoia that China will overtake and outgrow it ending the US’ global hegemonic reach has become very deeply embedded in the collective American psyche. That paranoia has led the US to discredit any Chinese successes or achievements to get a psychic boost.

The US’ anti-China hysteria now has reached a point where not even China’s sporting excellence at the Tokyo Olympics can pass without a hostile remark. The New York Times recently in a highly critical article titled “The Chinese Sports Machine’s Single Goal: the Most Golds At Any Costs”, effectively claimed that China had rigged the Olympics for political purposes. Such comments are so puerile that these need no response.

The article was published in the financialexpress.com.