Biden in the White House:  Is US on the mend? 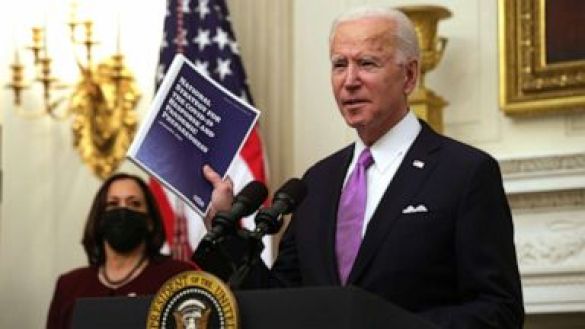 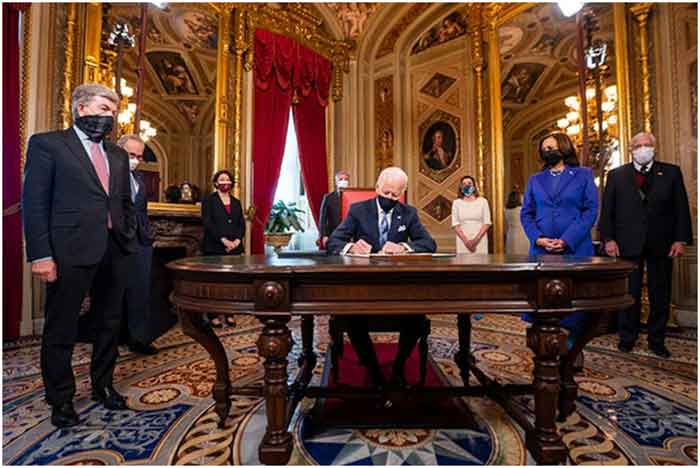 Biden is in and Trump is out. Despite all the drama, America’s flawed democracy has managed to make the will of its people prevail. Americans have got their President, Mr. Biden that they voted for.

Mr. Biden was officially sworn in on 20th January 2021 as the 46th President of the United States of America and sadly, due to COVID 19 scare and suspected security threats from the Trump loyalists, the swearing in ceremony could not be held in the presence of an applauding crowd, instead it had to make do with 200,000 American flags and 25,000 National Guard members, in audience.

Last four years of Donald Trump has been the darkest in America’s modern political history. Trump tenure was not only one of utter chaos but the ugliest.

However, some argue that Trump per se is not the problem – problem is America. In a society where 47% still adore Trump, a person who according to Marina Hyde of the Guardian has had “No grace, no dignity, no humility, no magnanimity, no class, no empathy, no soul” problem according to Arundhati Roy is not Trump, he is simply “the effluent of a system that went wrong.”

Thus, many argue that Trump may have gone but Trumpism remains though Biden’s victory and Trump’s departure from the White House would change one thing for sure – usher in civility in political discourse in US. The questions that are now asked are whether Biden and his administration would succeed in mending a system that had gone wrong at so many levels and has been degraded further by Trump.

True, Biden is a decent person and he means well. But is decency enough to rescue America from the abyss of dysfunction it has fallen into, a society that over the years has become inherently racist, self-serving, cruel, and iniquitous.

In his inaugural speech Mr. Biden has highlighted three important goals that he said he would be focusing on and these are – save American lives from the scourge of COVID 19; unite the nation; and rescue the country from the ‘uncivil war’.  In addition, on his first day at the Oval Office President Biden has issued 17 Executive orders that among other things include – an action plan for the COVID 19 , reversal of several of Trump’s foreign policy decisions such as rescinding of child migrant deportation order, revocation of travel ban on several Muslim countries, re-entry of US into the UN Climate Change Accord and re-joining the WHO. He also made decision to correct the slavery history of US that Trump and his team have since distorted.

To assist him in policies and day-to-day administration and to implement his plans Mr. Biden has appointed one of the youngest and ethnically most diverse group of professionals that US has ever witnessed.

Is US on the mend then?

An immediate change would be that the White House would cease to function as a twitter and oral factory producing filth. Civility would certainly be the new norm. Beyond this and given America’s entrenched and intractable toxic institutions other changes if any, would be slow and some may never happen.

Let us start with COVID 19. There is no doubt that Mr. Biden is serious and has set in motion measures that are most appropriate and yet avoided. Mr. Biden has ordered obligatory wearing of masks in all “federal properties”. This is a good start, but his main challenge is to convince the rank file Americans to comply, nationwide.

Indeed, until COVID 19 vaccines have covered the entire US population and more importantly, proven effective, preventive measures that warrant significant behavioural change is the answer and this is a problem for the Americans – convincing Americans to change behaviour where defiance is equated as  freedom and regulation is regarded as assault on freedom, prospect of implementation of COVID 19 prevention measures right across the board and not just in federal properties, looks a little bleak. Furthermore, America’s health delivery system which is significantly market oriented and thus possesses limited capacity to reach out to the people and where 25 million COVID 19 cases and 400,000+ deaths and counting, are a rude reminder that bombing people in faraway countries do not enhance security of fellow Americans, what is needed is investment in wellbeing of people will take time to cut ice. Hopefully, Biden administration appreciates these realities and do all it can to save lives within, from within.

In his inaugural speech Jo Biden also revealed another key goal of his administration – “Bringing America together….uniting our people” who are afflicted by, “….Anger, resentment, hatred….Extremism, lawlessness, violence…”. This is a timely and honest appreciation of the current state of the US society. But then given that US has always been a racially, socially and economically a divided nation and that Trump gave social division and racism respectability and the fact that majority Republicans who are outright racists and confederation loyalists  who continue to believe that the attack on Capitol Hill was legitimate, reveal a mindset that is deeply and dangerously criminal. It would thus be difficult to assuage and unite American people. Besides, US is a society where racism and fondness for violence, within and outside, has had such a long history and something which is so deeply entrenched that It would need Biden and his team enormous amount of energy and resources in value change.

Biden’s next challenge is to stop the poor in US becoming poorer and this would require massive welfare payments, a taboo in America’s convoluted capitalist ideology that interprets investments in social safety net as communism. Biden would also need to stimulate the economy and create jobs. However, with the world economy slowing and, some economies regressing and with China being the only exception which is growing which is also the second largest economy in the world with whom the US has picked disputes, Biden’s efforts to revive the US economy without reviving healthy relations with this important Asian nation is likely to hit a brick wall.  Signs are that the new Administration has stayed with Trump’s hostile Anti-China rhetoric. This is not helpful.

Biden’s decision to return to the international norms and processes – re-joining Paris Accord and WHO – is wise and commendable. However, given that US foreign policy domain is almost entirely controlled by a network of vested interest that operate both within and outside and in tandem, has rendered the prospects of abatement of US led and/or encouragement to illegal and immoral wars, deaths, destructions, and mayhem overseas, less promising. Indeed, if Biden’s choice of his foreign policy team who are known for their biases is any guide, hope for a peaceful world in the coming years looks a little elusive unless of course pandemic does its own tricks.

Amanda Gorman, the reciting Poet laureate at Biden’s inauguration ceremony reminded her country, the US that it has incurred many losses and therefore, “a sea we must wade” and “brave the belly of the beast.” In terms of America’s international behaviour Amanda urged that “We seek harm to none and harmony for all. Let the globe, if nothing else, say this is true.”

These are powerful words and in case Biden and his team are looking for a comprehensive policy framework that have the potential to make America great, kind, and moral I suggest that they read and re-read Amanda’s inauguration poem.

The article was originally published in the countercurrents.org